Global and local inequality has been a major topic of debate, leading to many attempts to quantify income disparity. The Gini Coefficient is the best-known measure of inequality, but it has its flaws, as do all inequality measurements.

A popular measurement of economic inequality focuses on variations in income among people in a state. Since no country has perfect equality, the question becomes one of calculating how unequal a particular society is. Various formulas have been devised to measure the difference between the average income and the distribution of earnings. At the end, a single number is used to represent a nation’s level of inequality. A good index should take into account several basic rules. For example, the size of the country should not affect the level of inequality. Moreover, the absolute value of income should not change the calculated level of disparity. Finally, if income is transferred from the rich to the poor, the level of inequality should fall.

Numerous challenges are encountered with all proposed formulas. Perhaps the greatest is that of data collection. Average income may be fairly easy to measure, but for any disparity index a detailed data set on income distribution is also required. Such data is often unavailable, especially for poorer countries in which “off the record” transactions are common. As can be noted in the above map, the Gini coefficients of many countries have not been calculated due to the lack of data. Much of sub-Saharan Africa in particular thus remains blank.

A major problem with any index is that of oversimplification. To begin with, absolute and relative levels of inequality are difficult to measure. For example, in most inequality indexes, a hypothetical country with three people with yearly incomes of $750, $1,000, and $20,000 would be counted as having the same level of inequality as a three-person country with incomes of  $75,000, $100,000, and $2 million. In the first case, however, the individuals with incomes of $750 or $1,000 would have little to spend on anything but basic necessities. In contrast, the proportion of income spent on basic necessities in the second country would be relatively low across the board. Although the income variation is encapsulated by the inequality index, effective variation in spending power can be drastically different.

Other aspects of inequality can be hidden via demographics or government policies. The population distribution by age is not factored into any of the available indexes.  Yet a country with many impecunious college students would show relatively high levels of inequality even though the students can be expected to graduate into higher income brackets. Furthermore, government transfers, such as food stamps and other welfare programs, are usually not taken into account, even though they often have important effects on overall inequality. These are just some examples of the problems with reducing a complex situation to a single number: intricacies are lost and such numbers can be misleading.

Despite such intrinsic problems, there is still a great interest in assessing inequality through the use of a simple index. The global standard for calculating income disparity has become the Gini coefficient. As defined by the CIA Factbook, the Gini coefficient is:

Despite the flaws of the Gini coefficient, it does provide useful insight into the geography of inequality. For example, Latin America has some of the highest Gini levels of any region, which stems from the large disparities present in many countries, especially those with poorer indigenous populations. This contrasts with much of Europe, which has much lower levels of inequality.  In general, countries that have higher levels of economic development have a lower Gini value, but the United States is an exception to this, signifying the relatively high levels of inequality in the US compared to Europe.

However, comparing countries across disparate regions of the world leads to a realization that the Gini index does not tell the full story. For example, New Zealand and India have similar Gini figures, 36.2 and 36.8 respectively (according to the CIA Factbook), but their circumstances are very different. New Zealand, despite having a significant gap between the indigenous Maoris and the population of European descent, has still managed to create an economy with little pronounced poverty and without the levels of extreme wealth found in the United States. India, with its vast population of malnourished people working in servitude, coupled with its sizable population of servant-dependent elites, certainly appears to vastly higher levels of inequality than New Zealand. One would also expect India’s GINI coefficient to have increased markedly in recent years, given its impressive economic growth rate as well as its persistently high levels of absolute poverty. Yet India has seen a surprisingly steady Gini score, potentially casting doubt either on its economic data or on the index itself. Other countries in the same general Gini range, such as Israel and Ghana, are also marked by different kinds of inequality.  Although the Gini Coefficient –like other inequality measurements—can be used broadly to show varying levels of inequality, it is best used in conjunction with other sources of information to gain a better picture of actual disparities. 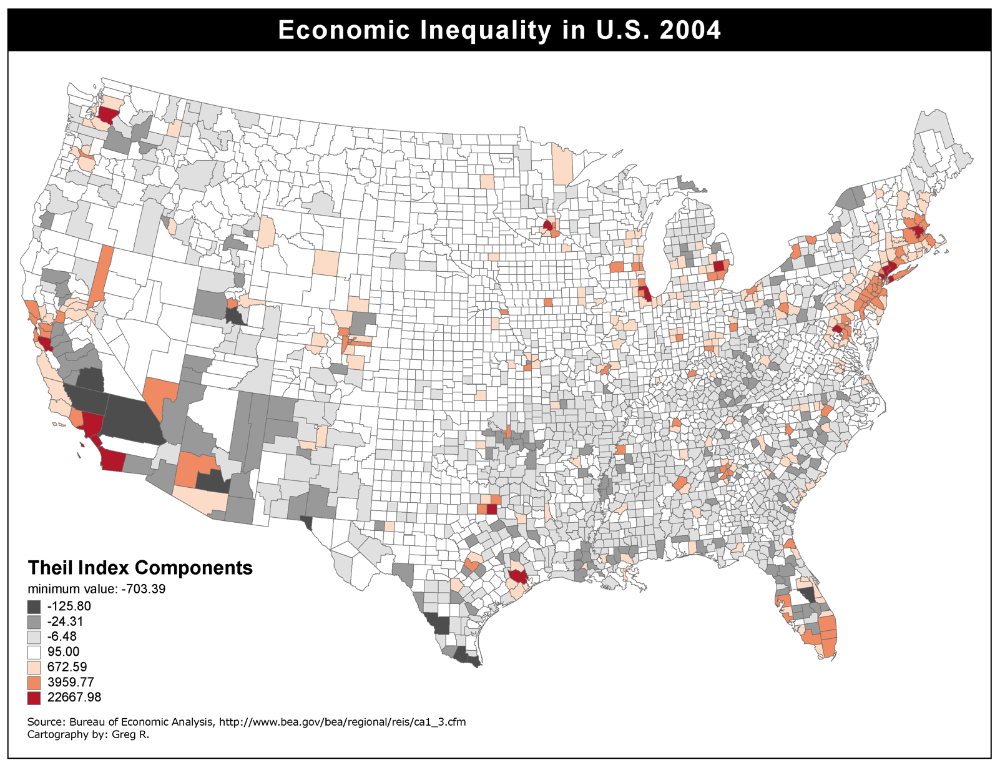