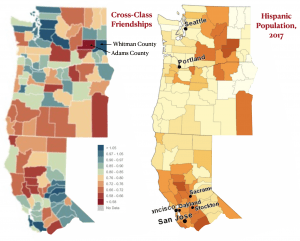 On the map of “Economic Connectedness of Low-Socioeconomic-Status Individuals by County” (see the post of August 11), the Pacific Northwest appears as a highly variegated zone. Counties in Washington, Oregon, and Northern California range from the highest to the lowest category, with few obvious spatial patterns.

But as is true in the northern Rockies and northern Great Plains, ethnic differences underlay many of these county-level disparities. Counties with large numbers of relatively poor Hispanic farmworkers generally rank low, indicating a lack of connections across ethnic and economic lines. In agricultural southeastern Washington, counties dominated by highly mechanized dryland grain farming, such as Whitman, rank high, whereas as those dominated by more labor-intensive irrigated crops, such as neighboring Adams, rank low. Whitman’s elevated standing also reflects the presence of Washington State University. Across the country, counties with major universities tend to have relatively large numbers of cross-class friendships. 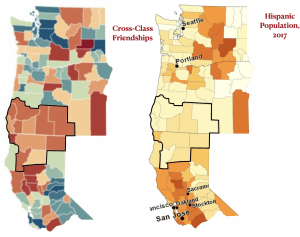 Across a sizable area of southwestern Oregon and far northern California, however, both ethnic/racial diversity and the level of economic connectedness is low. On both scores, this region looks more like southern and central Appalachia than other parts of the Pacific Northwest. As the 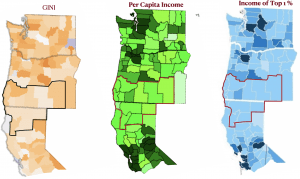 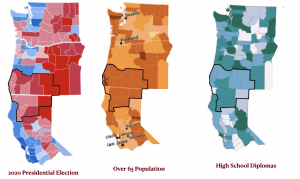 next map series shows, the region is heavily Republican-voting – although it is not as Trump-inclined as West Virginia. It also has a large percentage of people over age 65. It deviates most sharply from central Appalachia in its relatively high percentage of people with high-school diplomas.

Although Oregon is conventionally divided east-by-west, in the western part of the state the north/south divide is equally important. Although the fertile Willamette Valley in the northwest was settled heavily by New Englanders, most of the rest of western Oregon was substantially settled by people from the upper south. Many rural areas still have an Appalachian feel. 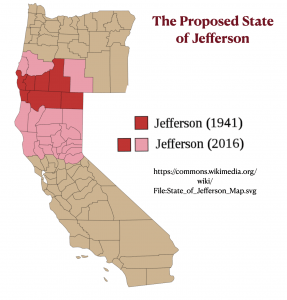 Not coincidentally, the low-connectedness region of southwestern Oregon and far northern California forms the core of the controversial proposed state of Jefferson, which has received local support for decades. Proponents argue that their largely rural and relatively remote region has been ignored – and bullied – by the state governments of Oregon and California. Intriguingly, 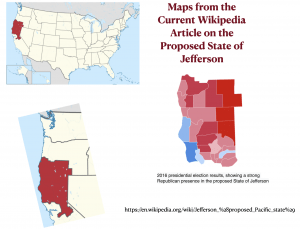 Wikipedia’s article on the State of Jefferson pushes its would-be borders farther to the south than has been the norm, including even Mendocino County. Although Mendocino may have a local Jefferson movement, it r 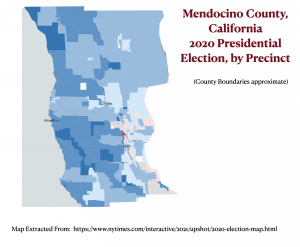 eceives little support. As the precinct-level electoral map of the county shows, Mendocino is distinctly blue (Democratic Party voting). As a result, most of its residents want nothing to do with the populist right-wing Jefferson movement.