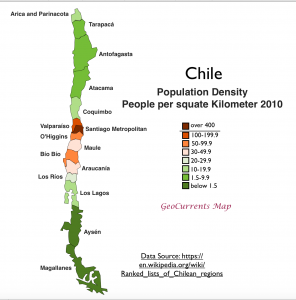 The Wikipedia includes a number of articles on “ranked lists” of the first-order divisions (regions, provinces, etc.) of various countries. The one on Chile is particularly comprehensive. It includes only one map, however, that of the human development index. As a result, I could not resist mapping some of the other data found there. I have focused on those tables in which the gaps between regions are relatively large. I have not considered female life expectancy at birth, for example, because the figures vary only slightly, ranging from 80.2 to 82.5.

Chile geography of socio-economic development as indicated by these maps is patterned in a somewhat unusual manner in regard to the country’s more basic core/periphery structure. In most countries that have a clear core area, in terms of political power, economic concentration, and demographic weight, lightly populated peripheral areas are usually less prosperous. In Chile, however, the far north and the extreme south may be far removed from the center of power in Santiago and may have few inhabitants, but they also post the country’s highest levels of socio-economic development. 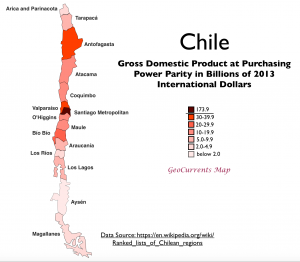 As the population density map makes clear, Chile has a pronounced core- periphery structure. Population is highly concentrated in the greater Santiago metropolitan area, the country’s political and economic heartland. The other regions of central Chile are also relatively densely populated. The far north and especially the far south, on the other hand, are sparsely inhabited. Such patterns are rooted in the country’s physical geography, as central Chile has broad, fertile, and well-watered valleys with mild Mediterranean climates, whereas the far north is hyper-arid and the far south is rugged and mountainous with a raw, wet, and windy climate. In terms of total economic output, as seen on the second map, Santiago not surprisingly looms large, producing vastly more than any other region of the country. The far south, in contrast, has a very low economic output, as does the extreme north. The northern region of Antofagasta, however, stands out for its relatively high level of GDP, especially if one considers its meager population. 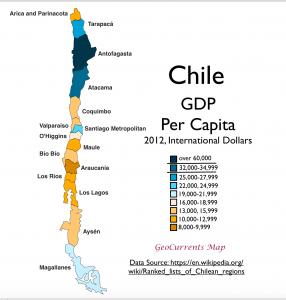 It is therefore no surprise that Antofagasta comes in first place in terms of per capita GDP, as can be seen in the third illustration. But what really stands out on this map is the inversion of the country’s basic core/periphery pattern. Although greater Santiago is a relatively productive region, most of the rest of central Chile is not. Higher levels of per capita GDP are found in the peripheral regions of the 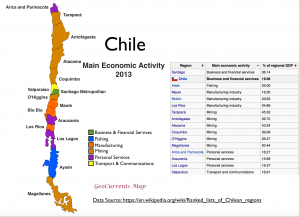 far south and especially the north. The major factor here seems to be Chile’s highly profitable mining sector. As can be seen on the next map and its associated table, almost 60 percent of Antofagasta’s GDP comes from mining. Although far southern Chile, unlike the north, is not often associated with mining, the Magallanes region does have some significant oil and natural gas deposits. As noted earlier this year in MercoPress:

The company [GeoPark] points out it arrived in Chile in 2005 and since then has invested 600 million dollars in hydrocarbons development in Magallanes, and is one of the main investors in the region in recent years. This helped a significant increase in oil and gas production in Chile, contributing with 40%/50% of the region’s mining industry GDP and between 13%/15% to the overall region GDP. 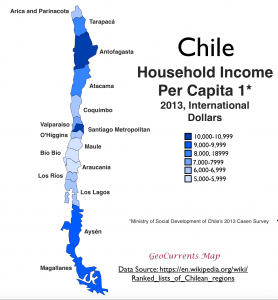 Per capita GDP figure are often misleading, as they do not necessarily reflect average living conditions. Such circumstances are better captured in maps of income and ownership. In terms of household income, Santiago is near the top, but it is narrowly bested by Antofagasta, according at any rate to the Ministry of Social Development of Chile’s 2013 Casen Survey. As the map from this survey shows, south-central Chile is clearly the poorest part of the country, whereas the north (excepting the extreme north) and the far south score quite high. Such 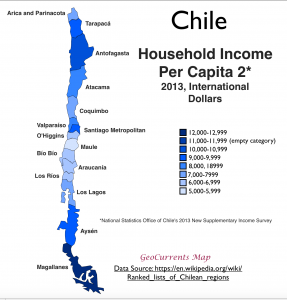 patterns are more strongly marked in a second measurement of the same indicator, this one from the National Statistics Office of Chile’s 2013 New Supplementary Income Survey. Here the extreme south is shown as much more prosperous than the rest of the country, with the Magallanes region besting greater Santiago by 12,993 to 9,918 ( in international dollars).

Magallanes, and to a slightly lesser extent its neighboring region of Aysén, 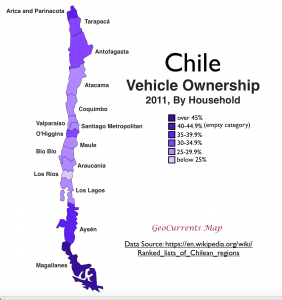 post high figures in other measurements of well-being. In regard to vehicle ownership, Arica and Parinacota in the far north shows a surprisingly high number, as it generally ranks lower than the other northern regions in most socio-economic indicators. Greater Santiago’s figure, on the other hand, is lower than might be expected, but that partly reflects the heavily urban nature of the city itself. In the water-heater map, the north has relatively low figures despite 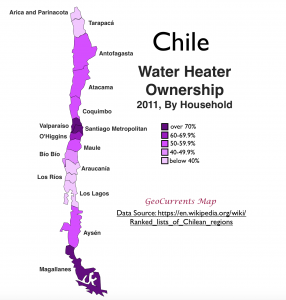 its general prosperity, but it is a zone of mild winters in which hot water is not as important as it is further to the south. When it comes to cable and satellite TV, Antofagasta in the north posts particularly high figures, but Aysén and Magallanes in the far south are only a little behind. The map of computer ownership shows Magallanes in the top spot, with Santiago lagging oddly behind. Internet access, to the contrary, is high in Santiago as well as in the far south, although it is higher 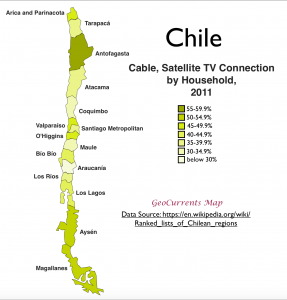 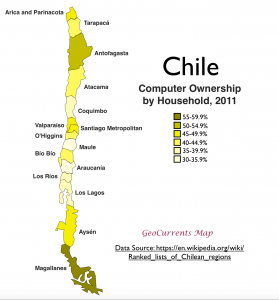 still in Antofagasta. Finally, the map of the absolute poverty rate shows similar patterns: Antofagasta, Magallanes, and Aysén have the best (lowest) figure, while south-central Chile has the worst (highest). Here the relatively high poverty rate in the extreme northern region of Arica and Parinacota is noteworthy, as the region otherwise seems to be relatively well off. One might therefore be tempted conclude that it has a rather high degree of income 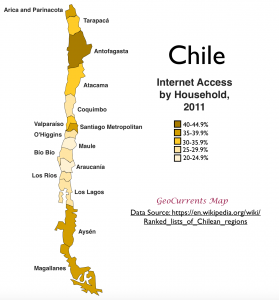 inequality, but, as the next post will show, that does not seem to be the case. 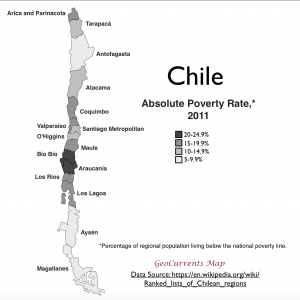