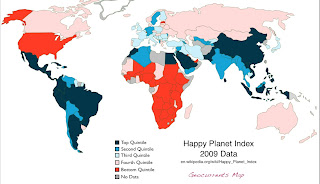 Most measurements of development rely heavily on per capita economic output. While the U.N.’s Human Development Index (HDI) considers education and longevity as well, Gross National Income remains an essential component. The use of such economic data as a proxy for overall development is controversial. Some find it unduly materialistic, focusing on the raw production of goods and services, hence deemphasizing human relations or spiritual values. Environmentalists criticize such indicators for ignoring ecological degradation. High levels of economic production, they argue, are not necessarily sustainable, and may even undermine human civilization by generating a runaway greenhouse effect through excess carbon dioxide emissions.

Several alternatives to economically based measurements of development have thus been proposed. A few years ago, the small Himalayan Kingdom of Bhutan announced that it would seek to maximize “gross national happiness” rather than “gross national product.” Although the concept has proved difficult to put into operation, a number of scholars, developmental agencies, and even national governments have expressed interest. Within the last week, discussions of using a “gross national happiness” indicator have appeared in the Times of India, the Otago Daily Times of New Zealand, and the Inquirer, one of the Philippines’ main newspapers. In Britain the conversation has gone further, with the government announcing that it will “follow through on Prime Minister David Cameron’s campaign pledge to gauge national happiness and use the findings to help shape policy.” In Bhutan itself, however, the pursuit of happiness has by no means eclipsed the quest for conventional develoment. The country’s GDP expanded by 9.8 percent in 2007, 2.7 percent in 2008, and 5.7 percent in 2009, its economic growth heavily underwritten by the building of dams in order to export electricity to India. Whether such projects increase the happiness of the Bhutanese people remains open to debate.

The most carefully constructed scheme for measuring ecologically sustainable development along with human contentment is probably the Happy Planet Index (HPI), devised by Britain’s New Economics Foundation. As the official website puts it, “the index combines environmental impact with human well-being to measure the environmental efficiency with which, country by country, people live long and happy lives.” Happy Planet figures are statistically derived from measurements of longevity, perceived happiness, and environmental sustainability. The use of the HPI is spreading, as showcased earlier this year by Time Magazine. The author of the Time article concluded that “in terms of the world wants measured, it seems that the … HPI [has] it over the GDP.”

But does the Happy Planet Index provide a reliable guide to either human happiness or environmental health? I do not think so. Although Costa Rica’s top ranking is no surprise, it difficult to credit Jamaica’s third-place showing, Guatemala’s fourth, or Colombia’s sixth, as these countries are afflicted with high levels of violence, class and ethnic conflict, and social disruption. In terms of murder rates, they rank third, fourth, and seventh respectively. The index, moreover, implicitly contends that such factors as freedom and gender equity are little account in determining human wellbeing, with such an authoritarian and male-dominated country as Saudi Arabia receiving an extremely high ranking. Environmentally as well, Saudi Arabia’s elevated standing makes no sense, nor do those of a number of other countries, including Indonesia, Egypt, and Pakistan. Indonesia, after all, could be the world’s largest emitter of carbon dioxide if deforestation and the burning of peat-lands are taken into account.

The more I contemplate the Happy Planet Index, the more bizarre it seems. Could the authors of the index really believe that Pakistan is much better off, socially and environmentally, than Norway, or that Yemen outranks the Finland? Do they really believe that the earth would be a happier planet if all countries were to follow the developmental pathways of Egypt, Pakistan, and the Philippines, rather than those of Canada, New Zealand, and Denmark? Pakistan, already at the edge of social and political chaos, suffers extreme deforestation and soil salinization, yet its population of 170 million is expected to reach almost 300 million by 2050. Yemen is on the verge or running out of water, yet its average woman can be expected to bear roughly five children, an utterly unsustainable level of fertility. But we are expected to believe that both environmentally and socially, Pakistan and Yemen solidly outrank Iceland and Norway? The mind boggles.

The infelicities of the Happy Planet Index stem in part from its component indicators, as subsequent Geocurrents posts will explore. But I suspect they also derive from a desire to castigate wealthy countries, particularly the United States. The U.S. ranks high in conventional measures of development, especially those that stress per capita GDP. But as the U.S. also has extremely high per capita carbon dioxide output, it is widely seen as undermining overall planetary sustainability. The HPI thus appeals to many by putting the United States in a low position.

But one must wonder whether the scholars at the New Economics Foundation actually take their own findings seriously. Do they really view Saudi Arabia as a social and environmental model, ranking thirteenth in the world? If so, the real problem is one of gross geographical ignorance.