An Attempt To Map Human Development In Pakistan 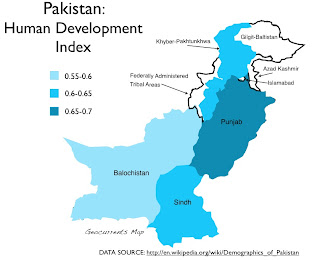 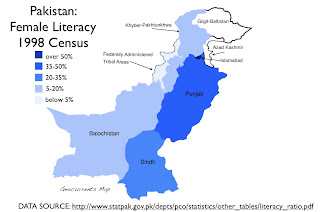 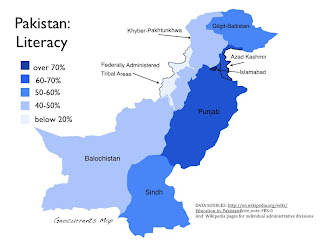 The contrast between India and Pakistan in regard to readily available geographical data is extreme. In less than an hour of internet searching, I found the information necessary to compile more than a dozen maps of Indian social and economic development, using relatively solid data that covers almost all Indian territory. Over a much longer period of time, I was able to put together only three sketchy maps of Pakistan (posted at left). Easily accessible statistics on Pakistan are almost always generalized across the country as a whole. What little geographically specific information is available usually covers only the provinces of Punjab, Sindh, Balochistan, and Khyber-Pakhtunkhwa, ignoring the Federally Administered Tribal Areas (FATA), Gilgit-Baltistan, Islamabad, and Azad Kashmir. Punjab, moreover, is so large and demographically dominant, with roughly half of the country’s population, that generalizing across its full expanse is of limited use. North Punjab and South Punjab, as we have seen, are very different places, but it is difficult to portray such differences cartographically.

The map of Pakistan’s Human Development Index (HDI), a composite measurement examining life expectancy, education levels, and standards of living, reveals generally low levels across the country, with distinct regional variation. Punjab, not surprisingly, comes out on top, followed by Sindh and Khyber-Pakhtunkhwa, and with Balochistan falling at the bottom. In actuality, FATA has much lower levels of human development than Balochistan, but information on this non-administered region is not available. Azad Kashmir and especially Islamabad, also left blank on the map, would contrastingly show relatively high levels of human development.

Although detailed information at the sub-provincial level is not available, the relevant Wikipedia article does differentiate urban and rural HDI standings for the four provinces. Here we find that urban Sindh – Karachi, essentially – has the highest ranking, whereas rural Sindh has the lowest, substantially lower even than rural Balochistan. Like South Punjab, much of rural Sindh has long been a quasi-feudal region, dominated by powerful landlords and remaining relatively cut-off from modern political administration. Yet in contrast to South Punjab, Rural Sindh shows relatively low levels of support for radical Islamist organizations. It is also the main power base of the secular Pakistan Peoples Party.

The second map shows the female literacy rate as recorded in the 1998 census. Islamabad, as expected, has a far higher ranking than any other area. Punjab ranks second, with Sindh coming in slightly lower, Balochistan substantially lower, and FATA at the bottom, with virtually nonexistent female literacy.

The final map shows total literacy, derived from the Wikipedia. Here, the article on “Education in Pakistan” provides information only for the four provinces, but the various articles on Pakistan’s administrative regions also provide literacy figures. Unfortunately, they do not necessarily agree. “Education in Pakistan” puts Punjab’s literacy rate at 60.2 percent in 2008, whereas the “Punjab” article pegs it at 79.7 percent in the same year! (In such cases, the lower figure was used for the map.) But regardless of such disparities, it is evident that Punjab has a higher total literacy rate than Pakistan’s three other provinces. On the relatively high showing of Gilgit-Baltistan, see the Geocurrents posting of January 4, 2010.