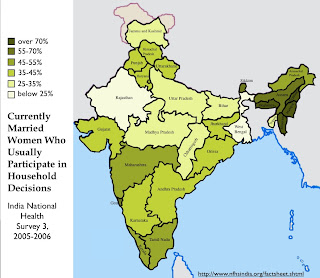 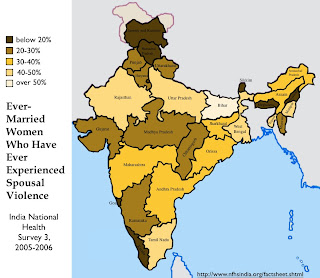 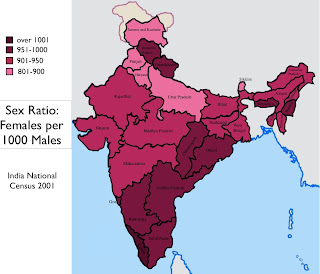 The data used in the first map, “Currently Married Women Who Usually Participate in Household Decisions,” presumably refers to major household decisions, but even so the figures are distressingly low. The main bright spot is the extreme northeast, particularly the states of Meghalaya, Mizoram, Nagaland, and Manipur. Female empowerment in this region reflects its tribal background and Southeast Asian cultural affiliations. Women’s authority is pronounced in some northeastern ethnic groups. Among the Khasi, the largest ethnic group of Meghalaya, descent is traced in the female line, and women traditionally manage household affairs. The Wikipedia notes that “the Khasi have an unusual dedication toward matrilineal customs.” Or as one recent article inimitably puts it, “In Meghalaya, women enjoy pivotal liberty & independence. Many look after their own importance & earn their livelihood & great success… Hence … women’s anticipation is evident in all its glory in Meghalaya’s unique women centric community.”

The other major oddity in this map is the poor ranking of West Bengal, lowest in the country. West Bengal is not a prosperous state, but it does reasonably well on many social indices, and it is noted for its intellectual traditions and left-leaning electorate. That it would rank substantially lower than Bihar on such an important indicator seems bizarre. Minor oddities include the average results of the generally progressive states of Karnataka, Andhra Pradesh, and Jammu and Kashmir, as well as the high showing of Assam.

In the second map, “Ever-Married Women Who Have Ever Experienced Spousal Violence,” Bihar reverts to its accustomed last place. Several other features of this map are also familiar: the far north does well, particularly Himachal Pradesh and Jammu and Kashmir, as do Kerala and Goa in the south. Most unusual, however, is the strikingly low position of Tamil Nadu, where 41.9 percent of ever-married women are reported to have been victims of spousal violence. Another unexpected result is Madhya Pradesh and Chhattisgarh besting Maharashtra. It is possible, however, that the data are inaccurate. Surveys respondents are not always fully representative, and there is often resistance to answering invasive questions. The answers solicited, moreover, reflect the skill and demeanor of those carrying out the research, which can vary from state to state.

In basic demographic matters such as sex ratio, by contrast, the data are solid. The sex ratio map posted here is a bit dated, but the basic patterns have not changed: the diffusion of sonograms and other technologies for fetal sex-selection has skewed sex ratios toward males across almost all of India. In 2001, only Kerala had more females than males; given the biologically determined longer life expectancy of women, this is what we would see everywhere were it not for deliberate interventions.

The most striking aspect of the sex ratio map is the location of the male-biased core zone, which straddles India’s basic developmental divide. The entire middle and upper Ganges basin forms the focal point of boy-preference, whether in the prosperous state of Punjab or in impoverished Uttar Pradesh. At a more local level, however, class and region interact in highly complex ways. According to one recent study, the lowest sex ratio in India – 707 females per 1000 males – is found among poor residents of the country’s wealthiest political subdivision, the Union Territory* of Chandigarh, which serves as the capital city of both Punjab and Haryana. Chandigarh, known as the “city beautiful” and famed for having been partially planned by the Swiss modernist Le Corbusier, is rated as India’s cleanest city, but its slums are rapidly expanding due to migration from surrounding rural areas.

India’s low sex ratios are a major national concern, leading to a number of proposed and enacted reforms. In July 2010, officials in Punjab announced that the number of girls (0 to 6 years of age) in the state per 1000 boys had increased from 798 in 2001 to 850 today. They attributed this gain to “the tough measures taken by the state government to ensure there was no violation of the Pre-Natal Diagnostic Technique (PNDT) Act” (which banned sex-selective abortion). Also of note is the “Save Our Daughters India Project,” launched on July 17, 2010 by A.P.J. Abdul Kalam, a former president of India.

*India’s highest-order political subdivisions are divided between its twenty-eight states, which are mapped here, and its seven much smaller and less autonomous union territories, which generally are not. In most cases, the data used to compile these maps did not include the union territories. A few maps, however, including the first two posted today, do show the National Capital Territory of Delhi, which is officially classified as a union territory.