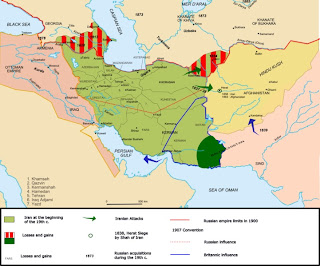 The weakness of Azeri nationalism in Iran (discussed last week) seems surprising at first glance. Iranian Azeris form a large, distinctive, and relatively cohesive ethnic group that has been deprived of basic educational rights in its own language. Similar situations in neighboring countries have resulted in serious unrest if not prolonged insurgency – think of the Kurds of Turkey. One might assume that the unpopularity of Iran’s restrictive clerical regime and the fact that independent Azerbaijan offers the attractions of a relatively open and globally engaged society would incline the Iranian Azeris toward separatism. Yet with a few exceptions, the southern Azeris show few signs of seeking autonomy, much less independence or union with Azerbaijan.

Historical factors figure prominently in explaining this seeming paradox. Persian- and Turkic-speaking peoples have been intertwined throughout Iran and Western Central Asia for centuries; historian Robert Canfield thus delineates a large cultural-historical region that he calls “Turko-Persia.” The region’s socio-political foundations long rested on a combination of Turkic military might and political power and Persian economic and intellectual ascendency. The ruling dynasties of Persia (what is now Iran) from the end of the Mongol period through the first quarter of the twentieth century were of Turkic origin, and relied heavily on the military power of Turkish tribal groups scattered widely across the country.

Persia’s last major Turkic dynasty, the Qajars, held power, albeit in a decentralized manner, from 1794 to 1925. Originally of Turkmen stock, the Qajar rulers spoke a language similar to Azeri in their homes, while employing Persian for court proceedings and administration. In the early 1800s, the Qajars lost their northwestern territories in the Caucasus – modern Azerbaijan – to the expanding Russian empire. Continuing threats and interference by both Russia and Britain would compromise the sovereignty of the country until the mid twentieth century. Such foreign pressures, if anything, enhanced the linkage between the Persian and Turkic peoples of Iran.

Ethnic relations were transformed under the Pahlavi dynasty, which came to power in 1925. To modernize Iran, Reza Shah Pahlavi sought to construct a nation-state based on Persian culture and language. This required a campaign of Persianization, and corresponding de-Turkification, in much of the country. Restrictions were placed on publication in Azeri and other Turkic languages, place names were changed, and pressure was even put on parents to give their children Persian-sounding names.

The Persio-centric policies of the two Pahlavi shahs antagonized Iran’s ethnic minorities, including not just Turkic-speakers but millions of Arabs, Kurds, and others. They also failed to resonate deeply with many Persians, who formed a bare majority of the country’s population. Under Mohammad Reza Pahlavi, Iran’s head of state from 1941 to 1979, Iranian nationalism was officially based not merely on contemporary Persian culture but on 2,500 years of imperial history. By glorifying his country’s pre-Islamic past, the Shah deeply antagonized Iran’s religious leadership, contributing to the collapse of his regime in 1979.

The new Islamic Republic of Iran fixed its national foundations firmly on the religious ties of Shiite Islam. Although Persian remained the favored language, especially in education, many of the restrictive linguistic policies of the previous government were dropped. As Shiites, the Azeris could easily share in the country’s reformulated scheme of national identity. (The same cannot be said for Iran’s Sunni groups, most notably the Baluch and the Kurds.)

Developments in northern Azerbaijan, under Russian and then Soviet control from the early 1800s to 1991, also militated against the formation of a pan-Azeri national consciousness. Russian imperial rule was harsh, and did not encourage the emergence of Azeri political identity. Under Soviet rule, such identity was nurtured insofar as it remained subsumed within communist ideology. Soviet agents promoted communist ideas in Iran as well. In the 1920s, ‘30s, and ‘40s, the Iranian Communist Party gained strength in the north, and especially in the Azeri-speaking northwest. But the Soviets overplayed their hand. After having occupied much of northern Iran during World War II, the Soviet Union set up a quasi-independent communist state in Iranian Azerbaijan in 1945, appealing to Azeri ethnic identity. Most Iranian Azeris, however, rejected the Marxist ideology of the “Azerbaijan People’s Government,” which collapsed in 1946. As much as they may have distrusted the Pahlavi dynasty, most southern Azeris preferred it to the Soviet Union.

The independence of Azerbaijan in 1991 again changed the dynamics of Azeri identity, opening the doors for the first time to the emergence pan-Azeri nationalism. The effects of long-term historical development, however, are not so quickly erased. In terms of political identity, Iranian Azerbaijan remains far more Iranian than Azerbaijani.