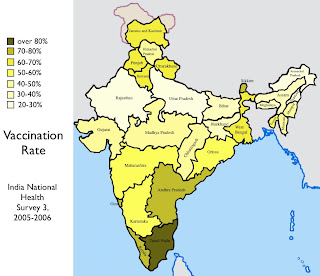 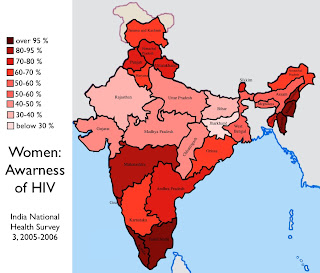 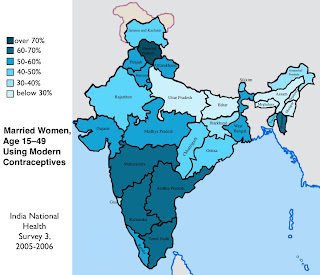 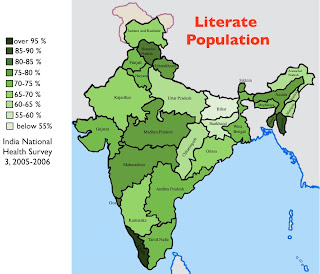 Our final post on social development in India takes on a miscellany of indicators. The first map, showing vaccination, is notable for extreme variability, with the rate varying from 81 percent in Tamil Nadu to 21 percent in Nagaland. As expected, the center-north lags well behind the south and far north. Low rates of vaccination here are a concern, as the area is one of the world’s few remaining reservoirs of the polio virus. New immunization campaigns, however, are underway. Also notable are the very high rates of vaccination in the southeast (Andhra Pradesh and especially Tamil Nadu), and the fact that West Bengal for once outpaces Punjab, Maharashtra, and Himachal Pradesh. Clearly, the various aspects of social development advance unevenly across the states of India.

The second map, charting women’s awareness of the HIV virus, also shows pronounced variability while conforming more closely to the typical pattern of development. Of particular note are the high levels of awareness in the northeastern states of Nagaland, Manipur, and Mizoram, generally poor areas hampered by insurgency and underdeveloped infrastructure, yet nonetheless undergoing pronounced cultural modernization. Owing to widespread outreach programs, HIV awareness has been increasing across India over the past five years. In July of 2010, a train dedicated to AIDS education streamed across northern India. According to one report, “Thousands of people from villages and towns in Assam turned up to see what the seven-coach ‘Red Ribbon Express’ train had to offer, as it chugged across the remote north eastern state earlier this month.   The train, which has counseling and medical services, and a troupe of artists on board, is traveling across India to sensitize people about HIV.”

The third map, depicting modern contraceptive use, yields a few real oddities. Note the relatively low rates of contraception in Kerala and Goa, which are well known for their below-replacement fertility levels and strikingly high levels of general social development. The fact that roughly a third of Goa’s inhabitants are Catholic may influence this figure. In general, however, religion is not a good predictor of contraceptive use. India’s three predominately Christian (Protestant) states – Mizoram, Nagaland, and Meghalaya – have some of the highest and lowest rates of modern contraceptive use.

The final map, depicting literacy, is perhaps the most important of all. Here Kerala and Mizoram really shine, as does Himachal Pradesh in the northern Himalayan belt. Assam and Madhya Pradesh have surprisingly high figures, but the most unexpected feature of this map is the low showing of both Karnataka and Andhra Pradesh, seats of India’s most important information technology (IT) hubs, Bangalore and Hyderabad. Despite major investments, both states contain pockets of entrenched poverty and illiteracy, lagging well behind Tamil Nadu and Kerala in across-the-board social development. Some of the IT magnates of southern India, along with the country’s Human Resources Development Ministry, think that a soon-to-be-released $35 computer will help address the problem. “The hope is that an affordable computer will allow more students of all ages to engage in today’s digital world, increasing the country’s standards in education and also spurring economic stimulation.”

Tomorrow’s post will conclude our exploration of Indian development.