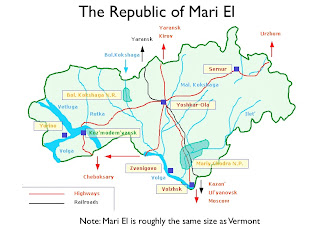 As we saw yesterday, the traditional animism of the Mari people of Russia’s Middle Volga region was historically tolerated by both the Russian Orthodox Church and the Russian Empire. In Mari El today, animism is officially regarded as one of the republic’s three traditional faiths, along with Orthodox Christianity and Islam. Such has not always been the case, however. Under the early Soviet regime, all forms of religion were repressed. One Mari practitioner recalled “creep[ing] into the forest with [my] grandmother to perform sacrificial rites by night. The police – fervent atheists, communists – would come. They kicked over our cauldrons and chased us away.” During World War II, Stalin relented in the assault on religion, and reportedly even tried to “co-opt the karts’ [pagan priests] spiritual powers when pushing back the Nazi invasion of 1941.” Relatively relaxed attitudes seem to have revived in the post-war era; after the downfall of the Soviet Union, the new Russian government insisted that “ancient paganism” was worthy of respect. Even the local Orthodox bishop argued in 1993 that traditional beliefs should be respected, as Protestantism posed a greater threat to the republic than paganism.

But such accommodating attitudes have declined in recent years. The autonomy of the Russian republics was significantly reduced after Vladimir Putin took office; regional leaders came to be appointed by Moscow rather than selected locally. As the animist establishment in Mari El turned against the republic’s administration, the Russian government came to see the faith as a potentially dangerous vehicle for Mari nationalism. By the early 2000s, Mari traditionalists were complaining that their sacred groves, numbering some 520, were being vandalized and in some instances cut down. The plight of the Mari began to reach the attention of the wider world. In May 2005, the European Parliament criticized Russia for “violating the cultural and political rights of the Mari, … cit[ing] the difficulties the Mari people face in being educated in their first language, [and the] political interference by the local administration in Mari cultural institutions …”

2006 saw an intensification of religious and ethnic strife in the republic. In that year, Mari leader Vitaly Tanakov was found guilty of spreading “religious and ethnic hatred” for his pamphlet entitled “A Priest Speaks.” As Geraldine Fagan, the main English-language reporter on the Mari, explains:

Peoples influenced by the Bible and Koran “have lost harmony between the individual and the people,” argues Tanakov, in what is actually one of only a few references to other faiths in his leaflet. “Morality has gone to seed, there is no pity, charity, mutual aid; everyone and everything are infected by falsehood.” By contrast, he boasts, the Mari traditional faith will be “in demand by the whole world for many millennia.”

In 2009, the Mari El Supreme Court confirmed the condemnation, ruling that Tanakov’s pamphlet spread religious and other forms of “extremism.” The booklet is currently banned throughout Russia. Meanwhile, other minor assaults on the faith continue to occur. Mari traditionalists, for example, have been barred from advertising their festivals in state newspapers.

Mari animist leaders have responded to such attacks through a media outreach program and by stressing the environmentalist credentials of their religion. The main Mari website English-language website, MariUver, however, focuses not on Mari traditional beliefs but rather on the common concerns of all of the Finno-Ugric minority groups of Russia. Recently postings have emphasized linguistic threats much more than religious ones, as well be explored later in Geocurrents.