The World of Baseball — and of Tim Lincecum 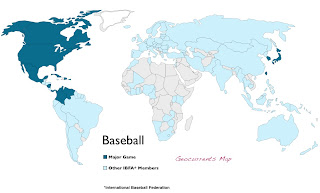 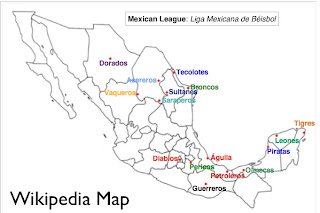 The world map of major cricket-playing countries bears a close resemblance to the historical map of British imperial power. Does the map of baseball similarly follow the extension of American power abroad? A quick glance at the first map posted above shows that baseball’s domain is wide indeed, encompassing many countries that have hardly been touched by American might. But if one just looks at the dark-shaded “major baseball countries,” the story seems different. Although the formal possessions of the United States in the Caribbean have been limited to Puerto Rico and the U.S. Virgin Islands, the rest of the region was considered to fall within the U.S. sphere of influence. American troops were periodically sent to a number of Caribbean countries, occupying the Dominican Republic, for example, from 1916 until 1924. The story is somewhat similar in East Asia, another major baseball zone. The United States occupied Japan for roughly decade after the Second World War, and still maintains large military bases in South Korea and Japan. One might therefore assume that the global spread of baseball is linked to the historical extension of American power abroad.

Such an assumption, however, would be incorrect. Baseball came to Japan, for example, as early as the 1870s, introduced by American missionaries and teachers. It was very popular well before WWII. Baseball diffused to Korea and Taiwan in the early 1900s when they were under Japanese rule. In East Asia, the map of baseball thus reflects the historical role of the Japanese Empire, not that of the United States. The game’s American roots, however, were not forgotten; North Korea banned baseball in the 1950s as the “sport of American imperialism.” Baseball returned to North Korea in the 1990s — by way of China. After the game was adopted in China, North Korean authorities decided that it was not so tainted after all.

Baseball came to the Caribbean through migration and cultural exchange. It was evidently introduced to Cuba in 1860 by Cubans returning from sojourns in the United States. According to Wikipedia, baseball’s quickly growing popularity came at the expense of the “patriotic” sport of bullfighting, unnerving Spanish colonial authorities. By subsequently banning baseball, they only ensured its domination, as the game “became symbolic of freedom and egalitarianism to the Cuban people.” Cuban migrants subsequently took the sport to the Dominican Republic and other Caribbean locales. In Venezuela, however, baseball was introduced in the early 20th century by Americans working in the oil industry. In contemporary Latin America, baseball is closely associated with the Spanish-speaking Caribbean region. In Colombia, it is played much more in the heavily Afro-Colombian northern lowlands than in the Andean core of the country. Even in Mexico, a disproportionate number of professional baseball teams are located on or near the Gulf of Mexico.

Baseball’s lack of an imperial legacy is also apparent in the areas where it failed to spread. The U.S. military occupied Haiti from 1915 to 1934, yet the country isn’t even a member of the International Baseball Federation. The Philippines was under full US colonial rule for almost a half-century, and retained large U.S. military bases until 1991, yet Filipinos never really took to the game. The country does have a baseball league, but the sport is not widely played or followed. Basketball vastly overshadows it.

But if Filipinos care little for baseball, their attention was turned to the sport in late October and early November 2010. Philippine newspapers and television stations focused on one player in the World Series: San Francisco Giant’s pitching ace Tim Lincecum. Lincecum is certainly newsworthy. Beyond his throwing prowess, he attracts attention in the U.S. media for his breezy personality, colorful language, and extraordinary athleticism: Lincecum is called “the freak” mainly because of his uncanny ability to get so much power out of such a slight frame. With his long hair, misfit image, and arrest-record for marijuana, Lincecum makes an ideal sports hero for quirky San Francisco. But Philippine journalists care little for all of that; they are drawn to Lincecum simply because of his Filipino ancestry. Lincecum’s mother is Filipina-American, the daughter of poor immigrants who came to the United States as farm laborers. Filipino reporters have been disappointed that Lincecum does not stress his roots in their country, but they hold him up as someone for Filipinos to emulate. The Philippine Sports Commission will soon be inviting Tim Lincecum to visit “his grandparents’ country.”