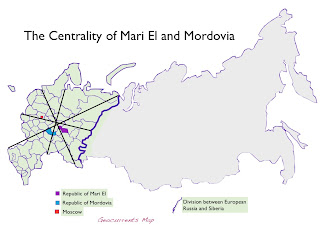 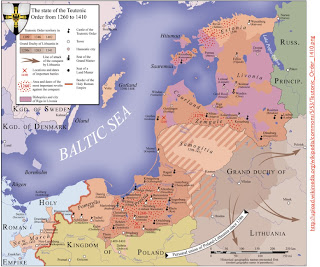 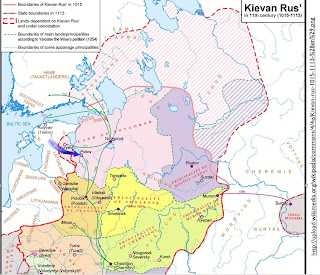 The continued existence of animist (or “pagan”) religious practices among the Finnic-speaking peoples of the middle Volga region, especially the Mari, is usually considered a curiosity. The Mari, after all, are merely one of a plethora of ethnic groups scattered across the vast reaches of Russia, many of which are noted for their distinctive cultural practices. Students of Russia have long been schooled to focus on Russians and the Russian state; occasional nods are made to the Volga Tatars, the restive inhabitants of the Caucasus, the Jews, and a few other crucial or problematic peoples, but the Mari, the Komi, the Mordvins, and the other “eastern Finns” seldom get serious attention.

This is unfortunate. As we shall see in the next several Geocurrents postings, the Finnic-speaking peoples of eastern and northern European Russia have played important roles in Russian history. The current post will focus on animism in the region, drawing out lessons for world history from the survival of middle-Volga paganism.

The Mari may be a small group relative to the Russians, but at 600,000 they outnumber the entire populations of thirty-three sovereign states. And while not all Maris are animists, animism is also encountered among some of their neighbors. According to a 1997 Russian law, respect is to be officially accorded to the “ancient pagan cults, which have been preserved or are being revived in the republics of Komi, Mari-El, Udmurtia, Chuvashia, Chukhotka and several other subjects of the Russian Federation.” With the exception of Chukhotka, none of these republics is located in a peripheral part of Russia. Mari-El is actually situated near the center of Russia’s European heartland, close to the high-tech city of Nizhny Novgorod, the country’s fourth largest metropolis.

The persistence of paganism among such a sizable and centrally located people tells us something significant about the Russian Orthodox Church. Theologically, little separates Eastern Orthodoxy from Roman Catholicism; the disagreement that provoked the final split in 1054 is a three-word clause in the basic creed describing relationships within the trinity. In terms of practice, however, the two traditions are worlds apart. Western Christianity has traditionally focused on orthodoxy, enforcing the officially sanctioned belief system of the church. As a result, heretics and pagans alike suffered extreme bouts of persecution before the eighteenth century, with organized animism crushed throughout the Western realm many hundreds of years ago. The Russian Orthodox Church was not exactly passive on this score, playing its part, for example, in the persecution of Russian Jews. But it cared relatively little about the beliefs held by villagers, or about what they did in sacred groves located deep in the forests. Ironically, the Orthodox Church has focused much less on orthodoxy than on orthopraxy, the correct ritual practices of its own adherents.

The historical differences between the two religious traditions are illustrated by events of the late 1100s and early 1200s, a period of expansion of Christendom along several fronts. In 1193, Pope Celestine III authorized the Baltic Crusades, a militant assault designed to cleanse the last redoubt of “European” animism along the eastern shore of the Baltic Sea. The Teutonic Knights, the Knights of the Sword, and other crusading orders were given carte blanche to convert or destroy the pagan ancestors of the Estonians, Latvians, Lithuanians and others, reducing their populations to serfdom in the process.* Some groups may have been exterminated. Only the Lithuanians successfully resisted, building a powerful state in the process that allowed them to later accept Christianity on their own political terms.

At the same time, the Russian state of Vladimir-Suzdal (successor to Rostov-Suzdal shown on the map) was advancing to the east into the territory of the pagan Volga Finns. Construction of the powerful citadel of Nizhny Novgorod commenced in 1221 near the site of what had been an important fortress of the Mordvins,** a Finnic-speaking people closely related to the Mari (labeled as “Cheremis” on the map). Although campaigns of forced Christianization were periodically launched, most Mordvin villagers remained largely pagan until the 1700s, and retained many aspects of animism, include tree worship, into the 1800s and beyond. Yet those who embraced the Orthodox faith could advance in the church. The famous (or infamous) seventh patriarch of the Russian Orthodox Church, Nikon (1605-1681), was an ethnic Mordvin, as is the current leader of the faith, Metropolitan Kirill of Smolensk, “Patriarch of Moscow and all Rus.”

But if the Russian state and the Russian Church often tolerated animism, they also periodically persecuted it. Yet again, the Mari traditionalists find themselves under pressure, as the next Geocurrents posting will explore.

* As William L. Urban demonstrates, not all people of the Baltic communities were reduced to servitude: “Native nobles who did accommodate to the newcomers faced less formidable barriers to assimilation than nineteenth-century historians assumed. At least one became a knight in the Teutonic Order…” I am not very impressed by the “at least one” figure.

** The Mordvins are actually divided into two separate ethnic groups, as will shall see in a later posting.

For a necessary revision to this post, please see GeoCurrents‘ January 29 post, Actually, The Russian State and Church Did Prosecute Pagans.