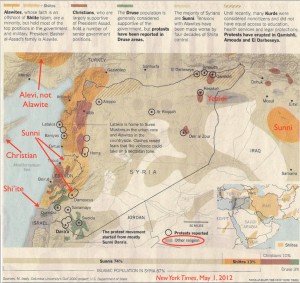 I was delighted to find in the New York Times this morning a large, colored map of cultural diversity in Syria and neighboring areas, focusing on religion but including some linguistic information as well. It was immediately apparent that the map was based on M. Izady’s work at the Gulf 2000 project, the best available source for maps of this kind. Close inspection, however, revealed that the Times cartographer either did not understand Izady’s original, or was simply not able to replicate it accurately. The map published this morning contains several glaring errors, as well as a number of misleading depictions. I have highlighted some of these problems with red labels on the reproduction of the map posted here.

The biggest problem with the map is the fact that it exaggerates the range of both Shi’ism and its Alawite offshoot. Note that virtually the entire Mediterranean coast north of Israel is depicted as Shi’ite (whether mainstream or Alawite), whereas in actuality, northern Lebanon and several other parts of the country are solidly Sunni. (In the Times map, the only part of Lebanon depicted as Sunni is the extreme south, an area that is actually Shi’ite!) Syria’s core area in and around Damascus is also shown as Shi’ite, whereas it is largely Sunni. The inset map of the distribution of Shi’ites throughout the Middle East is also highly exaggerated, showing many areas with at best Shi’ite minorities (upper Egypt, far western Turkey, much of Pakistani Baluchistan, etc.) as if they had Shi’ite majorities. The Alawite zone is also unduly inflated. It erroneously includes an area of Alevi Islam (a different Shi’ite “off-shoot”) in central Turkey, and the large Alawite blob depicted in central Iraq is purely imaginary.

The grey areas on the map, labeled “other religion,” are also curious. As this category includes Yezidi areas in eastern Syria and northern Iraq, Jewish areas in Israel, and a largely Christian zone in southern Cyprus, it should at least be labeled “other religions.” And as Christian areas elsewhere on the map are depicted as such, it seems odd that southern Cyrus would be thrown into the “other” category.

Finally, the Kurdish-speaking area, depicted with diagonal lines, is misconstrued. Kurdish is spoken over a somewhat larger area of Syrian than is indicated; more important, the Kurdish area extends over Syria’s borders across northern Iraq and southeastern Turkey. As the religious communities depicted on the map are not shown as terminating at the boundaries of Syria, it seems odd that the Kurdish area is.

For GeoCurrents maps of Syrian religious and ethnic diversity, see this post. 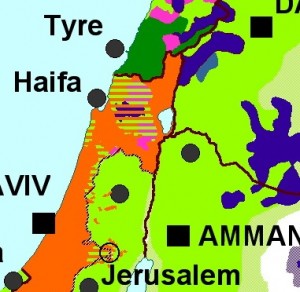