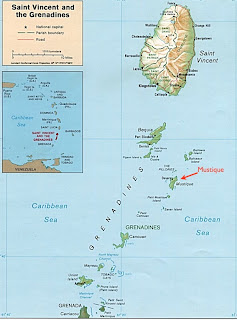 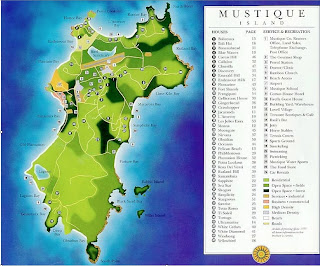 Mustique Island, in the country of Saint Vincent and the Grenadines, rarely makes the news – unless one counts celebrity gossip sheets. In those sources, the island appears fairly frequently. On March 16, 2011, for example, it was reported that there was a good chance that the “royal couple,” Prince William and Kate Middleton, would be honeymooning on Mustique, “beloved of Princess Margaret other royals.” In late February, speculations circulated that Charlie Sheen might seek refuge on the island: “So … anybody spy Sheen golf carting around Mustique? That’s our guess for his private jet’s destination.”

Mustique, a 1,400 acre (567 hectare) acre island, was radically transformed after 1958, when it was purchased by Colin Tennant, a Scottish aristocrat with a passion for pleasure. The island had once supported sugar plantations, but by the mid-20th century they had been long abandoned. When Tennant shelled out $67,500 for Mustique, its scrub-covered pasturelands supported one small village of around 100 people. His family was not pleased, fearing that the water-short island would be a boondoggle, but Tennant countered by pointing out that “wintering there would be cheaper than heating the castle.”* His goal, however, was to develop the island into an exclusive resort for the British aristocracy and their associates. He jump-started the scheme in 1960 by giving a ten-acre plot to Princess Margaret, Queen Elizabeth’s party-loving younger sister, as a wedding gift. Margaret built an estate on Mustique, which now rents for $18,000 to $28,000 per week, and came to adore the island. She invited selected friends and rumored lovers to purchase land as well, most notably Mick Jagger. In the meantime, Tennant continued to pour money into the island, exhausting much of his fortune in the process: “I had to borrow money and sell my Lucian Freuds, including my own portrait,” he complained.

By the 1970s, Mustique’s reputation as a place of privacy and parties for the glitterati was well established. All people arriving on the island are screened carefully, and “paparazzi and gossip writers are put on the next flight out.” As a result, harried celebrities claim that they can “behave naturally” on Mustique. Such “natural” behavior has often veered in rather wild directions: “At one early party, the young entertainers from the village didn’t have anything on and one of the ladies said, ‘Why are all those men wearing sporrans?’ But when Princess Margaret was present, there were limits.” Tennant’s final bacchanalia on the island took place in 1999 in a tented pavilion “decorated with erotic wall hangings from the Kama Sutra.” Princess Margaret, naturally, was the guest of honor.

The property relations and legal framework of Mustique have undergone several changes over the past half-century. The government of Saint Vincent and the Grenadines early on gave tax-free status to foreign property owners. It subsequently passed two acts, one in 1968 and one in 1989, designed to regulate tourism and limit the number of private villas, now capped at 110. In 1976, Tennant sold the Mustique Company, which holds legal title to the island, to a private consortium, although he continued to serve as master of revels; in 1988, the island’s property owners banded together to purchase the company. The roughly 100 land-holders, including Mick Jagger, Tommy Hilfiger, and Shania Twain, currently own the company and island. Serving them are the some 1,000 company employees, who reside in a village on the island.

If one is interested in a Mustique vacation, the Villa Opium seems particularly enticing – whether it is aptly named is another matter. In peak season, it is available for the mere $5,700 a night.

*All unlinked quotations are from “The Lord of Pleasure Island breaks his silence in an indiscreet and revealing interview,” By SHARON CHURCHER, Mail Online, December 2009