The GeoCurrents series on Montana will conclude this week by examining a series of maps of social and economic indicators, both for Montana and the United States as a whole. Many such maps showing county-level data can easily be found for the United States, but far fewer are available for individual states. It is fairly easy, however, to excerpt and magnify a portion of these national maps, and then block out a specific state. If the resolution of the national map is high enough, the derivative state map will be reasonably crisp.

We will begin in today’s post with a brief examination of drug use (including alcohol and tobacco). I will generally assume that the data used to make these maps is reasonably accurate, but that is not always necessarily the case. 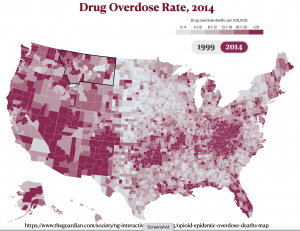 The national map of the drug overdose rate (in 2014) shows some clear geographical patterns. The rate is lowest in the agricultural regions of the Midwest and is also relatively low across the inland south and in most major metropolitan areas. The overdose rate is also mapped as low across New York; why this state would have such a lower rate than New England seems odd. Overdose rates are mapped as high in the Appalachian region (and in the upper South more generally), along the 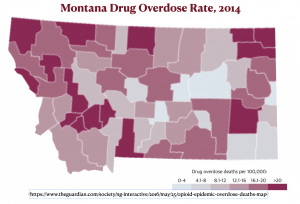 Gulf Coast, and across much of the West, including even Utah. Montana has highly variable county rates, which are not easy to explain. The patterns seen here do not correlate well with Montana’s other cultural, economic, or demographic indicators. 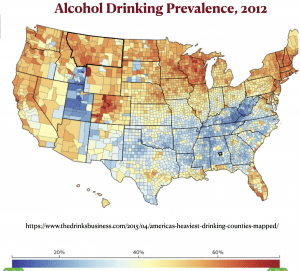 The patterns seen in the national map of alcohol use are markedly different from those found on the drug overdose maps. Here Appalachia and the upper South more generally show low rates of use, whereas the upper Midwest – particularly Wisconsin – show high rates. Low reported alcohol use in Appalachia might, however, correlate with high unreported consumption of “moonshine.” Very low drinking rates are unsurprisingly reported for the LDS (“Mormon”) region of Utah and eastern Idaho. Montana, like other northern states, shows generally high levels of alcohol consumption. The Montana-specific map indicates somewhat higher rates of use in the 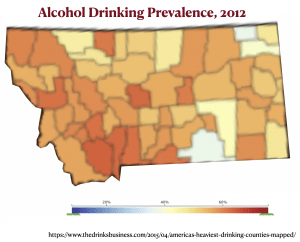 western part of the state. Surprisingly, it indicates low drinking rates in counties dominated by Native American reservations (as does the map of South Dakota). Alcohol sales are often restricted on reservations, but actual use may be higher than the map indicates. 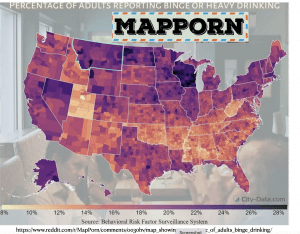 The Mapporn map of “binge and heavy drinking” shows patterns similar to those found on the alcohol-use map. The fact that certain states stand out clearly on this map (West Virginia, Wisconsin) does make me question the underlying data. Montana, like neighboring North Dakota, appears as a binge-heavy state.  On the low-resolution Montana excerpt map, two counties stand 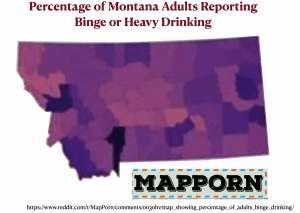 out: Missoula and Gallatin, home of the state’s two major universities. I doubt that this is coincidental. 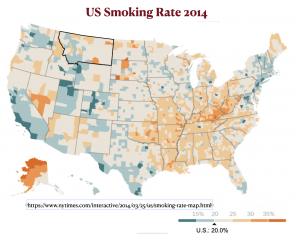 The national tobacco-smoking prevalence map shows high rates in the South and eastern Midwest, and low rates across much of the Northeast and West. Metropolitan countries, particularly 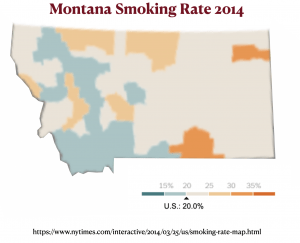 suburban ones, have low smoking rates. In Montana, tobacco-use tend to be more prevalent in counties with Native American reservations.

The remaining maps, taken from the website of the National Survey on Drug Use and Health, are based on idiosyncratic “substate regions” rather than counties. As a result, I have not excerpted Montana maps, although I have outlined the state for comparative purposes. 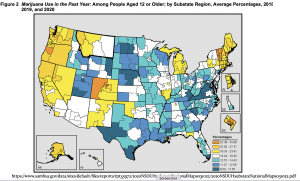 The map of cannabis (marijuana) use shows some sharp and intriguing patterns, particularly in the West. Use is evidently highest the Pacific Northwest (extending through central California), and in Colorado, but low in Utah, Idaho, and Wyoming. Western Montana falls in the same high-use category as the Pacific Northwest. (The issue will be explored in more detail in a separate post on cannabis legalization in Montana.)

The last three maps show some roughly similar patterns. Western Montana has a higher rate of cocaine use than eastern Montana, although not nearly as high as western Colorado. Heroin use is 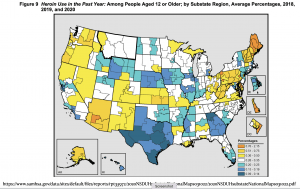 above the national average in the northwestern corner of the state. (The high level of heroin use in Maine and the low levels in Georgia and Texas are curious). Methamphetamine use is fairly high across 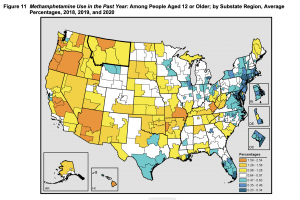 Montana and is especially elevated in the north-central part of the state. Rural Oregon seems to be the core area of this particularly damaging substance.