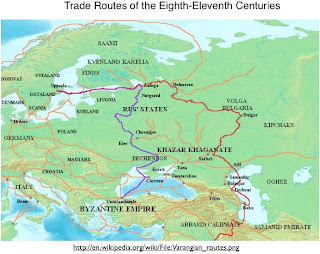 Geocurrents has focused for a week on the Finnic-speaking* peoples of Russia, and will continue to do so for two additional postings. This prolonged gaze is prompted by two things: my intrinsic interest in peoples who have maintained their languages and cultural practices despite hundreds of years of intense pressure to acculturate; and my conviction that the eastern “Finns” have been unduly ignored by both historians and students of contemporary Russia. Scanning the indices of scholarly works on Russian history, I find scant entries; delving through historical atlases, I find little** beyond an undifferentiated “Finnic Peoples” splashed across northern European Russia. When noticed at all, these groups are usually portrayed as peoples without history, insignificant pawns of larger powers. As evidence of their historical insignificance, some note the fact that no Finnic-speaking sovereign state existed until Finland and Estonia gained independence with the collapse of the Russian Empire near the end of World War I.

Certain groups, however, do pay close attention to the eastern Finnic peoples, which is itself a matter of considerable interest. At the forefront are Finnish, Estonian, and Hungarian scholars interested in the common history of the Finno-Ugric community and concerned about the current plight of their “distant relatives” in Russia. A few human rights activists have also taken up the cause, especially Geraldine Fagan, Moscow correspondentof Forum 18 News Service, whose reporting provides invaluable information on animists and other religious outsiders. European neo-pagans are also intrigued by Mari mysticism and nature worship, if often in a romantic rather than scholarly key. Distressingly, neo-Nazis can also be keen on the topic, discussing at some length whether eastern Finno-Ugrians, and sometimes western ones as well, are truly “White” (I will not link to Stormfront, but its discussion-boards on the subject are easily found). More surprisingly, a group of historical gamers has discovered the eastern Finns, generating an impressively knowledgeable discussion of the medieval Mordvin military on the Fanaticus webpage. (Professional historians may vastly under-appreciate the role of game-playing in generating interest in the past.)

I am convinced that the eastern Finnic-speaking peoples deserve far more historical consideration than they have been given. To begin with, they are not nearly as peripherally located as is commonly imagined. Historical maps of Europe show their homeland as beyond the pale of civilization. But if one changes the frame of reference, a different picture emerges. As the map above indicates, eastern Finnic territory lay astride the vitally important Volga trade route (highlighted in red on the map), an artery that connected Central Asia and the Middle East with the Baltic Sea region. The Volga trade route flourished in the 700s and 800s CE, when the powerful, Jewish-led Khazars held the southern terminus, while the Volga Bulgars (ancestors of the Volga Tatars) held the central junction with the Kama River, the Finnic peoples held upper Volga, and the Varangians (Swedish Vikings) held the Baltic terminus.

Just as furs were the coveted export product of the Finnic peoples of the north, honey and wax were the specialties of those living in the middle-Volga. Bee-keeping has been easy to overlook since the coming of sugar and paraffin, but its historical importance was great; sweeteners were rare, mead was beloved, and beeswax candles much desired. When the Russians conquered the eastern Finns, they did not reduce them to serfdom; instead they demanded tribute duties in the form of honey and wax (see Taagepera 1999). The hives of the Mari and Moksha (Mordvins) depended on the nectar- and pollen-producing trees of the Russian deciduous forest, especially Tilia (lime, linden, or basswood in common parlance). The advance of Slavic-speaking peoples was associated with the partial retreat of the linden forests, harming the Finnic economy. The Finns depended on the forests both for their apiaries and for swidden (“slash and burn”) agriculture.

In ancient and medieval times, the Finnic peoples were at roughly the same technological level as the Slavs, the Vikings, and the Volga Turks. They generally grew the same crops, raised the same livestock, and worked the same metals. According to Taagepera (p 63), the villages of the eastern Finns were often more prosperous than Russian-speaking ones even in the 1600s, in part because Russian serfs were more thoroughly exploited that Finnic tribute payers. Intriguingly, the Mokshan Mordvins had their own indigenous system of numerals, still used by bee-keepers and others into the 20th century. The Chuvash, a local Turkic-speaking people whose ancestors were probably Volga Finns, also had their own numerals. The development of complex numerical notation indicates heavy involvement in trading circuits dating back many centuries.

Considering all of this, why did the Finns never develop their own states? Actually, they did. The little-known Great Perm of the Komi people, which was closely linked to the fabled Bjarmaland of the Norse Sagas, functioned as a state until conquered by Moscow in 1472. Unlike other Finnic polities, Perm adopted Christianity on its own terms, and even used its own writing system, the Old Permic script. The extinct Merya of the Middle Volga may also have run something like a state from their fortified center ofSarskoye Gorodishche, near the Russian city of old Rostov. But in general, the Finns did not build large-scale political structures, which in the end doomed their struggle with the Russians. Some have suggested that their societies were not sufficiently hierarchical to support extensive unification. The fierce hierarchy of the Russian state proved highly advantageous in these struggles of the past; whether it is advantageous for Russia today is another question.

* I am using “Finnic” in the larger sense of the term, referring to all peoples speaking languages in the Finno-Permic division of the Finno-Ugric linguistic family.

** One exception is the Euratlas map posted yesterday, which shows Sarskoye as a state.