The Convergence of Drinking Habits in the United States, 1970-2007 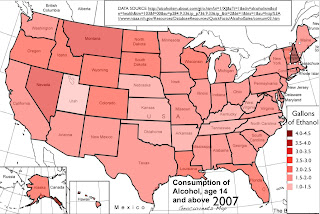 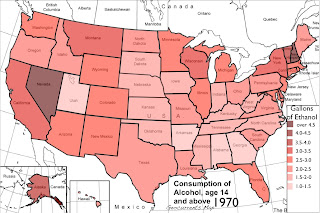 The United States has experienced a major rifting of its political landscape in recent decades as the Democratic Party has solidified its position in the Northeast and Pacific Coast, and the Republican Party has done the same in the Southeast, Great Plains, and much of the mountain West. Scholars debate the intensity of the divide; some see a disunited country of red and blue blocks, others a mostly purple land of nationally competitive political parties. The United States certainly does not face the threatening electoral splits found in Ukraine, Bolivia, or Pakistan, but its voting patterns are much more geographically skewed than those of a number of other countries, including Chile (see the earlier Geocurrents postings on these countries).

Some writers link political divergence with cultural divergence, contending that the liberal and conservative parts of the country are growing more separate not just in voting behavior but also in the conduct of everyday life. But are the people of the so-called red and blue states truly diverging in regard to what they eat, drink, wear, listen to, watch on television, and so on? Some evidence suggests that the opposite is occurring, and that the politically disparate parts of the country are actually converging in regard to many aspects of daily behavior. This week Geocurrents will examine cultural differentiation in the United States through one lens, that of alcohol consumption. Drinking habits tend to be culturally specific, freighted, and revealing, and in the U.S., the evidence on this front points undeniably toward convergence.

The first map above purports to show alcohol consumption by state per capita (excluding persons under fourteen years of age) in 2007, as measured in gallons of total ethanol. The data on which it is based, however, comes from sales rather than consumption, thus missing the transport of alcohol across state lines. New Hampshire’s top position stems largely from its lack of an alcohol tax, which entices shoppers from Massachusetts and other neighboring states. Number-two Nevada’s figures are themselves inflated by tourism, as much of the drinking in Las Vegas is done by nonresidents. Still, it still seems safe to regard Nevadans as the country’s heaviest drinkers. The difference between their per-capita consumption and those of neighboring Utah, the most abstemious state in the union, is roughly three-fold (4.22 vs. 1.34 gallons). That gap is substantial but not profound; the difference in Europe between the wet Czech Republic and dry Albania is more than six-fold.

Overall, the basic geographical pattern revealed by the map is relatively clear. A zone of light drinking is evident in the upper South* and central Great Plains, while zones of heavier drinking are found to the north and west. Strikingly, however, this divide bears no resemblance to the blue-state/red-state pattern of recent elections. In regard to alcohol consumption, New York looks much like South Carolina, Michigan resembles Alabama, and Texas and California look much the same.

Go back to 1970, however, and the picture looks very different. Forty years ago, Nevadans consumed more than four times as much alcohol as residents of Alabama (5.58 vs. 1.38 gallons). At that time, the Deep South (excluding aberrant Florida) clearly stood out for its low alcohol consumption, whereas the Northeast, Great Lakes region, and West (excluding Utah) had much higher rates of imbibing. At the time, the so-called Bible Belt was clearly evident on the map of alcohol sales. Today the correlation no longer holds. 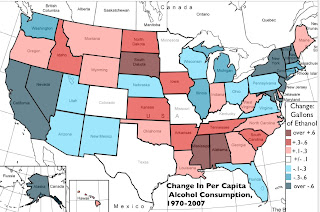 he final map in this series shows the change in per capita alcohol consumption between 1970 and 2007. For the United States as a whole, drinking has declined, dropping from 2.52 gallons of ethanol per person in 1970 to 2.31 in 2007. In almost half of the states, however, consumption has increased in the same period. States with historically low levels of alcohol use have registered gains, while most states with high levels have seen losses. (Exceptions include increasingly light-drinking Utah and increasingly heavy-drinking Delaware.) The northeast in particular has seen a sharp decline; New York’s per capita consumption dropped by almost a gallon between 1970 and 2007. In contrast, the Southeast, along with some of the Great Plains states, registered major gains. The map that charts these changes, unlike the previous two, does bear a fairly strong resemblance to the “red-and-blue” maps of the 2004 and 2008 U.S. presidential elections. But it does so in an inverted sense: the two regions of the country stand apart precisely because they are coming together.

*The Southeastern Appalachian region is noted as the traditional center of illegal alcohol (“moonshine”) production, which escapes official notice and is thus not included in figures such as those used here. As such, it is likely that alcohol consumption in the upper South is, and has long been, higher than the maps indicate. Even so, it is clear that licit drinking behavior in the United States has substantially converged over the past forty years.