(Note to Readers: Asya Pereltsvaig and I were both quite intrigued by a series of satirical maps of France found on the website Carte de France. Rather than write about them ourselves, however, we decided to turn the project over to Claire Negiar, a Stanford student and a native of Paris. Claire may be writing some additional GeoCurrents posts in the coming months as well. — Martin W. Lewis)

The choice of viewpoints used in the maps is itself of interest. The perception of France by its own people is conveyed through the vantage point of 3 cities (Paris, Marseilles, and Toulouse) and 2 regions (Brittany as representing the West of France, Normandy as representing the North). Although Lyon is typically thought of as the second or third city of France, Toulouse stands in for the South of France in general, separate from the city of Marseille. We will see how, together, these various maps give the impression of an overly centralized yet at the same time extremely diverse nation.

The reported perception of France from the perspective of Marseille is particularly simplistic: amusingly, the map features two latitudinal lines and one oval to create a total of four regions: “North Pole” for the far North of France, “North” for everything poleward of the region the French call “Sud” (which itself usually corresponds to the regions of Provence-Alpes Côte d’Azur, Languedoc-Roussillon, Midi Pyrennées and Aquitaine, but is here even more constrained) and, finally, the shining label “cons,” (“assholes”), assigned to the oval encompassing Paris. Of notice, too, is the ironic “Capitale” label on top of Marseille. The map perfectly showcases the deep-seated rivalry between Paris and Marseille, which, as far as most French people are concerned, mostly involves an intense soccer rivalry in which the members of each respective team are taunted with the term “enculé” (loosely meaning fucker) by the hordes of fans from the opposing team as they step onto their opponents’ home field.

Interestingly, the comments at the top of the map reveal some other truths about France: its plethora of local traditions and its cultural diversity. A Parisian myself, I find many of the expressions and jokes listed above the map as seen by Marseilles inexplicable: ‘Tu dis “sers moi un jaune” au lieu de sers moi un Pastis’ (‘You say “serve me a yellow” instead of “serve me some Pastis” ‘). In a recent article in The New York Times Magazine, Marseille is described as “a glorious melting pot of sun and seediness” (“Marseille, the Secret Capital of France?”), a view that has come to be the more or less accepted view throughout the country. In a caricatured world, Parisians would be the stuck up bourgeoisie and Marseille the gang of hooligans. This  perception is reinforced by the comments atop the map of Paris: “Tu trouves ça normal de payer 2000€ de loyer pour un 3 pièces” (‘You find it normal to pay 2000€ in rent for 3 a 3-room apartment’) or “Tu payes 12€  pour deux cocas en terrace” (‘You pay 12€  for two cokes on a café terrace’). In contrast, the comments atop the Marseille map are focused around the slang of the city’s inhabitants: ‘ Tu dis PEUCHEEERRE pour dire “le pauvre”’ (You say ‘PEUCHEEEERE’ to say ‘poor guy’), where ‘peuchère’ is a French archaism expressing compassion, which can therefore be read ironically, especially given the exaggeration placed on the word). Others include ‘Tu dis “je me suis ruiné” pour dire “je me suis fais mal”’(You say ‘I ruined myself’ to mean ‘I hurt myself’) and even ‘Tu dis “putain”, “con” et “enculer” dans toutes tes phrases’ (you say ‘shit’ and ‘asshole’ and ‘fuck’ in all your sentences) . The Marseillais, far from refusing the stereotypes, seem to vindicate their image as the “bad boys” of France.

However, as simplistic and 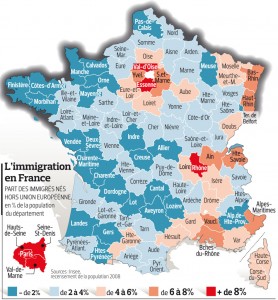 light-hearted as the map may seem, it nevertheless reveals some deep-seated truths about French geopolitics, in particular the intense centralization of the country—to the point that a map of France can essentially be reduced to Paris and Marseille. In terms of economy, at least, the picture is unequivocal, with the Paris region representing up to 30% of France’s GDP and 5% of the European Union’s GDP in 2013, despite France’s recent economic troubles.  The picture in Marseille is however more glum, as the city is beset with rampant unemployment and increasingly high homicide rates. Although Lyon was left out of these maps, it is in fact the second largest city in France in terms of GDP, ahead of Marseilles. The omission of Lyon therefore signals that Marseilles has always been one of the “têtes fortes” (strong heads) of France, the second arm of the country, with its own true character and culture, despite the fact that it is weaker economically than Lyon (with a GDP figure of roughly $59B, as opposed to Lyon’s $65B and Paris’ gargantuan $565B). Somewhat unsurprisingly, these three dynamic regions have also experienced the greatest influx for immigrants born outside of the European Union. 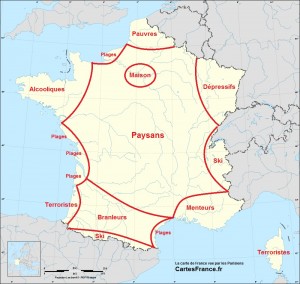 The map of France as seen by the Parisians seems more complex at first glance, though this does not mean that the Parisians are more discriminating than the Marseillais. The labels for the different regions here could be taken as offhanded proofs from inside the minds of Parisians, justifying France’s centralized political model. Alsace is perceived as the home of the “dépressifs” (depressed), the Bretagne region (Brittany), summed up for most Parisians by crepes and hard cider, are “alcooliques,”(alcoholics), and the Northerners are “pauvres” (poor).  The wildly successful 2008 French movie “Bienvenue Chez Les Chtis” (‘Welcome to the Sticks’) captured these dichotomies and prejudices perfectly. It is centered around a postal manager from the region of Lyon who is sent to the Northern region (Nord-Pas-de-Calais) as a punishment for having faked a disability in the hope of being sent to an office … on the Mediterranean. The movie was seen by a third of the French population in 23 weeks, thus showing the extent to which the regional question remains a running joke in France. The fact that this film came out in 2008, at the height of the financial crisis, is a tribute to the particular French vein of humor that seems to say: “on est tous dans la merde” (literally, we’re all ‘in the shit’). 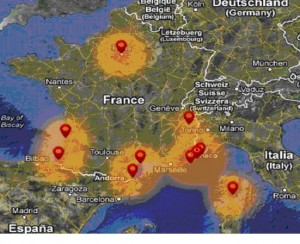 ankers’) and “menteurs” (‘liars’) for the southern regions show the extent to which Paris sees itself as pulling the country on its own—whether that is a role it has given to itself or the product of actual laziness from the other regions. The “terrorist” label both for the Basque Country and Corsica humorously point out the existence of occasionally violent separatist groups in both regions, though both places are also extremely popular vacation destinations for the Parisians, who seldom let geopolitics in the way of their summer migration.  Finally, the map reveals the idea that Parisians tend to see many regions of France as their playground. The “plages” (beaches) label along the Western and the Mediterranean coasts and the “ski” label along the Pyrenees and the Alps may seem amusing and reductive, but they are in fact indicative of the huge ebb and flow that occurs in the winter and summer (with all those weeks off work!), when a massive exodus heads out of Paris and into these regions. The French, although a generally well-traveled bunch, mostly stay in France for their vacations. As a matter of fact, 90% of all vacations taken by the population are within France, and the French are themselves responsible for 60% of the income generated by tourism in their country.  In this same vein, the map as seen by the Normands labels the Parisians as “envahisseurs du weekend” (weekend invaders), as many Parisians take weekend trips to Normandy, causing infamously nightmarish traffic jams on the road back to Paris every Sunday evening.

These maps, although playing on stereotypes and prejudices, as is usually the practice in satirical mapping, are less exaggerated than one may expect—which is perhaps why they are as funny and as successful as they are. They hit a lot of the main current political questions and trends that have been resurfacing as a result of current economic crisis in France and the rather lackluster presidency of Monsieur Hollande. Such concerns include: over-centralization, immigration, and increasing diversity, along with their counterparts of racism and xenophobia, a pointing of fingers between the regions, a lack of real integration and coherence, and perhaps more importantly, a lack of true understanding or empowerment of the regions. Most of these aspects go completely unmentioned in these maps—Paris may be loved and Marseille may be feared, but worse than these two extremes is the indifference accorded to a large part of the country’s culture and diversity.