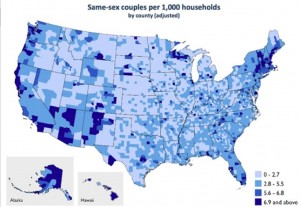 On October 10, 2011, Andrew Sullivan’s blog ran a corrected U.S. Census map showing the proportion of same-sex couples in American counties. (An interactive version of the same map was posted on the National Public Radio website.) The Census had originally claimed that there were 901,997 self-reported same-sex couples in the United States. Evidently, a number of respondents had initially misrepresented the sex of their partners. As a result, the new report claimed that same sex-couples numbered 646,464.

Sullivan’s commentary on the map was limited, noting only the prevalence of same-sex couples in the Northeast. Yet much more interesting—and perplexing—patterns appear on the map. Gay and lesbian partnerships are shown to be concentrated in urban areas, although not to the extent that one might have predicted. According to the census returns, a numbers of rural counties show a higher percentage of same-sex couples that do many urban counties. Not surprisingly, smaller metropolitan areas with major universities tend to rank higher than larger ones lacking such establishments. Compare, for example, Dane County, Wisconsin (Madison) with Milwaukee County, or Washtenaw County, Michigan (Ann Arbor) with Wayne County (Detroit). By the same token, the greater Austin, Texas metro area has a significantly higher percentage of same-sex couples than the much more populous Houston metro area. Another expected feature of the map is the paucity of gay and lesbian partnerships in most counties across the Great Plains. The fact that the Southeast is almost indistinguishable from the Mid-Atlantic and Great Lakes regions, on the other hand, is much more surprising. 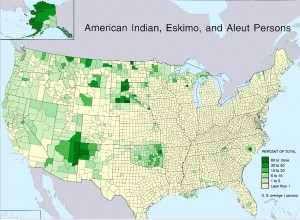 The map’s most unexpected and intriguing revelation, however, is the high proportion of same-sex couples in counties dominated by Native Americans across the “greater Northwest.” As can be seen by comparing the two maps, rural counties in South Dakota, North Dakota, and Montana that have significant numbers of same-sex partnerships are almost invariably sites of major American Indian reservations. The same pattern is also evident in neighboring states. Benewah country in northern Idaho, for example, is the home of the Coeur d’Alene people, Mahnomen County Minnesota lies entirely within the White Earth Reservation (Anishinaabe or Chippewa people), and Menominee County, Wisconsin is home to the Menominee people. The patterns found in Arizona and New Mexico are similar but more complicated. Both states are characterized by relatively high rates of same-sex partnership as well by large numbers of Native Americans, but at the county level the correlation is not particularly strong. In New Mexico, the highest rates of same-sex coupling are found in the so-called Hispano Homeland in the north-central part of the state, an area that has been heavily Spanish-speaking since the 1600s.

The prevalence of same-sex partnerships in Native American communities over a broad swath of the United States has been little noted in the media. The Suquamish Tribe of western Washington did receive national attention when it recently approved same-sex marriages, but otherwise commentary has been sparse. It should be noted, however, that many American Indian nations have traditionally reserved an honored place for transsexuals—or “two-spirit people”—whose ambiguous gender position has been associated with spiritual power.

Other rural counties with high levels of same-sex households are more perplexing. It seems odd indeed that Foard County in west Texas and Trigg County in western Kentucky would be classified in the highest category on the map.  In some cases, such seeming discrepancies could result from random distributional patterns. Foard County, for example, contains only 664 households; as a result, it would take only a few gay or lesbian pairings to place it in the “above 0.69 percent” high-end category.  Trigg County, on the other hand, has more than 5,000 households, and thus evidently has quite a few same-sex couples. It would be interesting to see how many of them are male-male and how many are female-female. As academics are wont to say, more research is clearly needed.