“I doubt not there are many who ignore the fact that in Eastern Africa, scarcely three hundred miles distant from Aden, there is a counterpart of ill-famed Timbuctoo in the Far West. The more adventurous Abyssinian travelers … attempted Harar, but attempted it in vain. The bigoted ruler … threatened death to the Infidel who ventured within the walls… Of all foreigners the English were, of course, the most hated and dreaded. …It is, therefore, a point of honor with me … to utilise my title of Haji by entering the city, visiting the ruler, and returning in safety, after breaking the guardian spell.” – Richard Francis Burton, First Footsteps in East Africa or, An Exploration of Harrar. eBooks@Adelaide 2009 In 1854, having recently gained fame from his pilgrimage to Mecca, Richard Francis Burton first entered the territory of what is now Somaliland. Burton’s destination was the city of Harar, located in what is now Ethiopia, but then an independent emirate. Harar was a challenge that Burton could not refuse: rumor had it that no Christian had ever set foot inside the city walls, and prophesy maintained that the city would decline if one ever did. Burton waited in the Somali port city of Zeila and explored its environs until he determined that the way to Harar was open. He reached the city with few problems, and remained there for ten days as the guest – or perhaps prisoner – of the Emir. 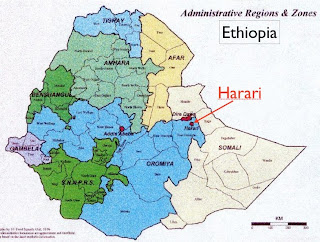 Burton was not particularly impressed with Harar or its inhabitants. “The Somal say of the city that it is a Paradise inhabited by asses,” he reported, immediately adding that, “the exterior of the people is highly unprepossessing. Amongst the men, I did not see a handsome face.” Yet he found the women of Harar “beautiful,” but only in comparison with their men. He also noted that, “both sexes are celebrated for laxity of morals. High and low indulge freely in intoxicating drinks, beer, and mead” – but in Burton’s case, “laxity of morals” was not necessarily an objectionable trait. He also praised Harar’s qat (“I could not but remark the fine flavour of the plant after the coarser quality grown in Yemen”), yet seemed disappointed that the drug did not have a stronger effect.

Burton was intrigued by the city’s language, which did not extend beyond its wall: “Harar has not only its own tongue, unintelligible to any save the citizens; even its little population of about 8000 souls is a distinct race.” Immediately outside of the city, Burton reported, one encountered a different “race,” the Galla (Oromo), who, he claimed, were habitually defrauded by the merchants of Harar. The profound separation of the city from its hinterland persists. The Harari are a distinct ethnic group with their own language. The Harari tongue is Semitic, hence only distantly related to the Cushitic language of the Oromo who surround them. Harar and its immediate outskirts thus forms one of Ethiopia’s ethnically based administrative regions, officially called the Harari People’s National Regional State (see map).

Harar today boasts an emerging tourist trade. UNECSO lists it as a world heritage site, claiming that it is the fourth most holy city of Islam, with 82 mosques and 102 shrines. It has other attractions as well – including hyenas. Semi-wild hyenas live within the city walls, providing scavenging services for the Harari. Hyena-men feed the animals raw meat out of their own mouths for the amusement of visitors.

The city’s hyenas are the subject of a blog: Marcus Baynes-Rock’s delightful Hyenas in Harar. Graduate student Baynes-Rock investigates human-wildlife interactions in urban settings, and he has found a fascinating case. The key to the relationship between people and hyenas in Harar, he argues, are the supernatural creatures called jinn (or genies):

“According to my sources, there are good and bad jinn in Harar and they are all pervasive, with the bad ones occasionally possessing people. And this is where the hyenas come in. They serve the town by locating and eating the bad jinn and maybe mistakenly eating the odd good one. While humans can only occasionally see jinn, hyenas see them all the time and will chase and eat them at every opportunity. In fact it’s been suggested that a hyena attacking a person could well be a case of a hyena attacking a jinni that has possessed a person. So presumably, the ‘oo’ sound is the hyena sucking the jinn from the ground, and the ‘woop’ is the point at which it enters the hyena’s stomach, the tomb of the jinn. But it goes even further…”

To find out just how far it goes, check out Hyenas in Harar.