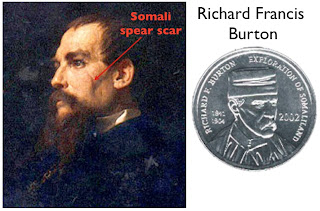 As a de facto sovereign state, Somaliland has its own currency, the Somaliland shilling. As is true elsewhere, the images on its coins and banknotes convey symbolic messages about the country. Somaliland’s bills, for example, depict both its sovereignty (showing its supreme court and central bank) and its pastoral heritage (with figures of sheep, goats, and camels). There is nothing unusual in such monetary imagery. What is curious is the one person depicted on Somaliland’s money, appearing on both the five-shilling and 1,000 shilling coins. Rather than an illustrious Somalilander, as might be expected, the coins show a famous – or perhaps infamous – British explorer of the Victorian era, Sir Richard Francis Burton. In selecting Burton, Somaliland advertises its heritage as a former British colony – and in so doing distances itself from the former Italian colony that constitutes the rest of the so-called country of Somalia.

In some respects, Burton is an odd choice to showcase Somaliland’s connection with Britain. In current academic circles, he is often denounced as an agent of imperialism, and a particularly bellicose one at that. Burton’s exploration of Somaliland, moreover, was not very successful. Preparing to chart the interior, his party was attacked by Somali warriors before it could leave camp. Burton was speared through both cheeks, one of his British companions was killed, and the other was captured. The expedition was so disastrous that an official British inquiry was established to determine whether Burton was to blame. Two years later, he was finally exonerated.

Yet in other regards, Richard Burton makes an ideal figure for Somaliland’s coinage. Unlike most European explorers of his time, Burton genuinely respected the peoples he encountered, and was always fascinated by their beliefs and practices. As Greg Garrett shows, he viewed “African natives … as a source of potential knowledge.” Burton was an uncannily gifted linguist who had supposedly mastered more than two-dozen languages. His cultural facilities were so acute that he could easily pass as a Muslim from western Asia, most often as a Pashtun. (Although he almost gave himself away by on his famous trip to Mecca by urinating while standing rather than squatting.) Beyond being an adept explorer, Burton was an accomplished writer, translator, ethnologist, poet, fencer, and diplomat.

Whatever his faults, Richard Burton was an extraordinary man whose accomplishments ought to be remembered. In the United States, they seldom are. When I mention his name to my students, most draw a blank. A few mention a Welsh actor.

In his time, Richard Burton was a popular and widely reviled figure. He certainly captured public attention. Who could better excite the Victorian imagination than a brilliant explorer in imperial service? But Burton was anti-Victorian in his sentiments, and he loved to shock, mock-bragging that he broke all of the Ten Commandments. His interest in foreign cultures fully extended to sexuality. Burton was intensely, and omnivorously, sexual. He gained early attention with his investigations into the boy-brothels of Karachi – rumor had it that he sampled as he spied. Burton’s advice for learning a language was simple: find a lover who speaks it.

The erotica of 1001 Arabian Nights continues to generate controversy – only now the outrage lies in the land of its origin. An Egyptian state-run organization recently republished the collection of tales, only to be denounced by a group of Islamists lawyers arguing that the “obscene” work should be banned. Egyptian intellectuals, however, are fighting back. According to Elan: The Global Guide to Muslim Culture, the chairman of the publishing house that reprinted the stories has responded firmly: “The fact that the first edition was sold out shortly after it was issued shows that Egyptians are avid readers and that they will not be influenced by a bunch of people who take advantage of Islam in order to suppress freedom.”