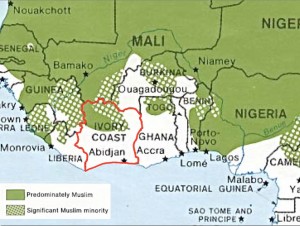 As we saw in the previous post, great uncertainty surrounds the demography of religion in Ivory Coast. Even basic figures on religious adherence are subject to heated debate.

While most sources estimate the country’s Muslim population at thirty-five to forty percent, others put it at more than sixty percent, arguing that Muslims in the south conceal their faith for fear of discrimination, and that the large and mostly Muslim immigrant population is systematically undercounted. Christian sources give much lower numbers, while stressing the Islamic community’s rapid growth. The two camps tend to concur, however, in discounting Ivory Coast’s sizable animist (or religiously “indigenous”) population. The CIA World Factbook pegs the animist population at only twelve percent, claiming that seventeen percent of Ivorians are without religion—an unbelievably high figure for an African country, and one that no doubt understates traditional beliefs and practices.* The Wikipedia puts the animist population at 25-40 percent; others claim that it constitutes the country’s majority. One Ivorian website gives the following break-down: “12% Christian, 25% Muslim, and 63% Traditional Beliefs”— numbers seconded by a Christian missionary organization. Missionaries on the ground also report relatively low figures of Christian adherence among Ivory Coast’s largest ethnic group, the Baoulé, who are often described as Christian. According to the detailed Joshua Project, only 34 percent of the Baoulé follow Christianity, with a solid majority retaining indigenous beliefs. Yet if Wikipedia is to be believed, the main urban settlement of the Baoulé has a Muslim majority.

As intrinsic problem with all such estimates is the prevalence of syncretism, or religious mixing. Many Ivorians are nominally Muslim or Christian yet remain profoundly animist in outlook and practices. It is relatively easy to convert to a universalistic religion such as Islam; following its precepts with fidelity is something else again. A knowledgeable acquaintance once described neighboring Guinea as “ninety percent Muslim and ninety percent animist,” a joke that nonetheless conveys a grain of truth.

Across West Africa, mapping religion is extraordinarily difficult. Not only is basic demographic data spotty, but communities of faith are often spatially interspersed. Ivory Coast in particular has experienced massive migration in recent decades, enhancing local diversity. In several parts of the country, migrants have streamed primarily into towns, heightening the differences between urban places and the countryside. Yet large-scale movements of people resulting in religious and ethnic dispersion is nothing new. Islam spread into much of Ivory Coast through the trading diaspora of the Dyula (Jula), a Mandé-speaking group (historically linked to the great medieval Empire of Mali) who established a network of mercantile centers through much of West Africa. Some of their trading hubs evolved into the core areas of Dyula states that ruled diverse populations. The prime example of such a Dyula state was the Kong Empire (1710-1895) of northeastern Ivory Coast, founded by Seku Wattara (Ouattara) and led by the Ouattara clan, forebears of current Ivorian president, Alassane Ouattara. Other Dyula settlements, such as Bondoukou in eastern Ivory Coast, developed into centers of Islamic scholarship. Bondoukou today is a highly mixed city, noted for its “one thousand” mosques. As described by Wikipedia:

The walled old city (Medina) includes ethnic neighbourhoods from far flung groups who originally came to the area as part of long distance trade networks. These include the Donzoso of the Donzo-Ouattara Dyula (related to the warrior Ouattara clans of the Kong Empire), the Jiminiso/Limamso of the Timité Dyula (which is home to the most prominent Muslim schools), the Hausa merchant town quarter of Malagaso, as well as the mostly Christian Bambaraso quarter.

Bondoukou has been relatively peaceful in recent years, but its surrounding countryside has seen bitter ethnic conflicts between the indigenous Kulango farmers and immigrant Lobi, semi-pastoralists from the north. Both of these groups (spelled “Loba” and “Koulango” on the Wikipedia map posted above) are primarily animist. 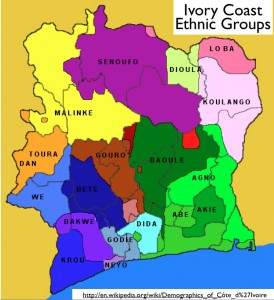 As a result of such complexities, few cartographers have tried to depict the geography of religion in Ivory Coast. The most commonly employed map is a 1987 effort that shows the extent of Islam throughout Africa, mapping both “predominantly Muslim” areas and areas with “significant Muslim minorities.” Despite its ubiquity on the internet, the map is flawed. It portrays several religiously plural areas as if they had clear Muslim majorities (such as southeastern Nigeria), while ignoring areas with significant Muslim minorities (such as the Cape region of South Africa). But as it is the only widely available map on the topic, it is worthwhile to examine how it represents Islam in Ivory Coast.

As one can see in the detail posted here, only a swath of northwestern Ivory Coast is depicted as primarily Muslim, while a slightly smaller area to the northeast is shown as having a significant Muslim minority. Comparisons with other maps suggest that both areas were likely delimited on the basis of ethnicity. The “predominantly Muslim” area corresponds closely to the territory of the Malinke (Mandinka) people, which is indeed appropriate (although the 1973 Area Handbook for Ivory Coast refers to the Malinke as “semi-Moslem” [p. 73]). Missing from the category, however, is the land of the closely related and strongly Muslim Dyula further to the east (“Diolua” on the map), located in the core of the old Kong Empire. The portrayal of the zone with a significant Muslim minority is also misleading. Here the cartographer apparently traced the outlines of the Senufo (Senoufo) people. Yet the Wikipedia describes the Senufo as “very animistic,” and a number of websites focused on traditional arts similarly depict them as devoted to their old religion. Christian missionary sites generally claim that a quarter of the Senufo have embraced Islam, and that the number is rapidly increasing. Wealthier Senufo, it is sometimes claimed, gravitate to the social norms of the Malinke, and thus convert. All told, mapping “Senufo-land” in Ivory Coast as having a significant Muslim minority is probably fitting. But the many other parts of Ivory Coast with important Muslim minorities have so far escaped cartographic depiction.

As mentioned in the previous post, the mainstream press often sidesteps Ivory Coast’s religious divisions, presumably for fear of reducing a complex problem to a simplistic “clash of faiths” model. An April 14th, 2011 New York Times profile of Alassane Ouattara does not even mention his Muslim faith, although it does allow that “Mr. Ouattara is from the largely Muslim north — which has been a de facto separate country from the Christian south since the 2002 civil war.” As we have seen, only parts of northern Ivory Coast are “largely Muslim.” Nor can one accurately depict the south as “Christian,” as it contains sizable populations of both animists and Muslims. The Le Monde article on African reactions to events in Ivory Coast referenced in the previous post is also misleading on this score. Here the author claims that Ghanaian opposition to French involvement in Ivory Coast “no doubt” stems from Ghana’s own experience with “peaceful, democratically sound elections.” Opposition to Western interference in African affairs, however, runs rather deeper than that. It is also noteworthy that Ghana has a solid Christian majority, and that the people of southeastern Ivory Coast, ethnic kin of the dominant Akan population across the border in Ghana, voted heavily in 2010 for the recently deposed former president, Laurent Gbagbo, as we shall see in tomorrow’s post.