The Pitfalls and Promises of Mapping World Religion

I have long been dissatisfied with world religion maps, especially those that are available on the internet. To be sure, mapping religion is an inherently difficult task. Many areas contain multiple faiths, just as different places often vary tremendously in regard religiosity itself. Changes in the religious landscape, moreover, are often difficult to capture. Most of Europe, for example, is appropriately mapped as Christian when it comes to its religious heritage, but in the 21st century such a depiction is no longer completely accurate. Over much of Europe, nonbelievers now greatly outnumber believers, and in quite a few places practicing Muslims outstrip practicing Christians. Some reports go so far as to claim that in terms of actual practice, France is now more Muslim than Christian,* although this assertion is probably exaggerated.

Religious “mixture,” moreover, can characterize not just regions but also individuals. An anthropologist friend of mine once characterized the West African country of Guinea as “90 percent Muslim and 90 percent animist,” which could well be true. But animism and so-called tribal religions more generally usually get short shrift in world religion maps. The same is true for syncretic faiths such as Candomblé, which might be the dominant faith in parts of northeastern Brazil, although only around five percent of Brazilians overall report themselves to be adherents. But such numbers are themselves suspect, as it is often difficult to enumerate religious adherents. Polling and census data are partial or non-existent over much of the world, and people often fail to be forthcoming about matters of faith when asked. As a GodWeb post argues, “To put it bluntly, when asked about religious belief and practice, ordinary citizens lie. And they lie about their faith to a greater degree then they lie about their sex life, or political activity.” 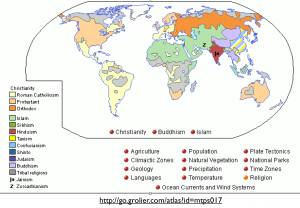 Another common problem in the mapping of religions is the inconsistent division of major faiths into their constituent branches. If Christianity is divided into its Roman Catholic, Protestant, and Eastern Orthodox branches, as it often is (see the map posted to the left), then by the same token Buddhism should be broken down into its Mahayana and Theravada forms, just as Islam should be divided into its Sunni, Shia, and Ibadi branches. Making such divisions, moreover, should be done in a rigorous manner. The so-called Oriental Orthodox Christian churches, such as the 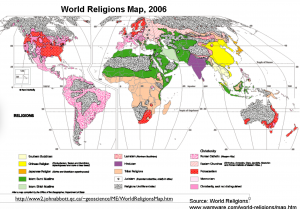 the Creed of Chalcedon that was adopted by the Christian mainstream in A.D. 451, they stand apart from Eastern Orthodoxy as well as Roman Catholicism and Protestantism. But as the diagram posted here shows, this situation is complicated by a number of subsequent unions of theologically disparate Christian branches.

But if the mapping of religion is inherently problematic, that does not mean that all maps of world religions are of equal value—or lack of value. Some basic maps are, of course, much better than others. Recently, moreover, a number of highly innovative and extremely detailed world maps of religion have appeared on the internet. Several GeoCurrents posts next week will examine these maps in some detail. Before doing so, however, I cannot resist pointing out how amusingly bad 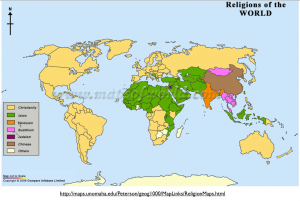 maps of religion can be. I would be tempted to nominate the one posted to the left for the booby prize of the worst world map on the internet.

To begin with, the map deeply distorts basic patterns of both physical and political geography. Note the seaway between North and South America, the misplacement of New Zealand, the division of North Korea into two 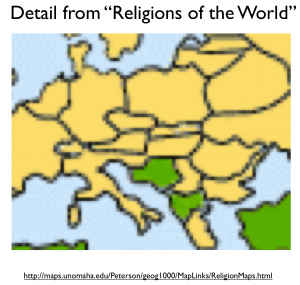 countries, and so on. A detail of the map’s depiction of central southeastern Europe reveals how laughable it is. But more to the point, consider its portrayal of religion: Guatemala and Costa Rica are non-Christian; Jordan is Jewish: Armenia, Ethiopia, Uganda, and Lake Victoria are Muslim, as is Taiwan; Japan is Christian; both North Koreas are “Chinese”; and Sri Lanka is Hindu. Interestingly, the site on which it is posted, which includes some fine maps of religion, merely notes that it “is a much more generalized map of world religions.” In actuality, this map verges on intellectual malpractice.

*According to a 2012 report by the Gatestone Institute:

Although 64% of the French population (or 41.6 million of France’s 65 million inhabitants) identifies itself as Roman Catholic, only 4.5% (or 1.9 million) of those actually are practicing Catholics, according to the French Institute of Public Opinion (or Ifop, as it is usually called).

By way of comparison, 75% (or 4.5 million) of the estimated 6 million mostly ethnic North African and sub-Saharan Muslims in France identify themselves as “believers” and 41% (or 2.5 million) say they are “practicing” Muslims, according to an in-depth research report on Islam in France published by Ifop.

Taken together, the research data provides empirical evidence that Islam is well on its way to overtaking Roman Catholicism as the dominant religion in France.

In Britain, Islam has overtaken Anglicanism as the dominant religion as more people attend mosques than the Church of England. According to one survey, 930,000 Muslims attend a place of worship at least once a week, whereas only 916,000 Anglicans do the same.