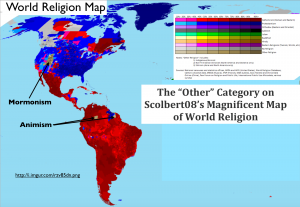 As noted in an earlier post, I regard Scolbert08’s map of world religions as a cartographic masterpiece. I do, however, have some qualms about the categories that it employs. I am particularly dissatisfied with the “other” grouping, which is composed, according to the key, of indigenous/animist 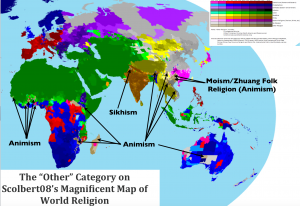 faiths, non-Trinitarian Christianity, and Sikhism. These religions, or groups of religions, hardly belong together. The map’s general classification scheme, moreover, reserves three and a third of its nine categories of faith for Christianity, which also hardly seems fair.

As far as the map itself is concerned, the non-Trinitarian Christian component of the “other” category is, as far as I can tell, limited to Mormonism (the Church of Jesus Christ of Latter Day Saints), which encompasses the majority (or plurality) of the population of a sizable portion of the western United States (centered on the state of Utah) as well as that of a few Tongan islands in the Pacific. But although Mormonism is the world’s largest non-Trinitarian Christian 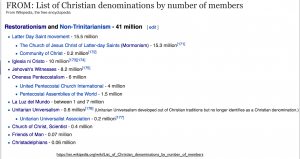 sect, most non-Trinitarian Christians are not Mormons, as can be seen in the Wikipedia breakdown posted to the left. Only Mormonism shows up on the map—again, as far as I can tell—because only it is spatially concentrated enough to generate local majorities or pluralities.

Separating non-Trinitarian from Trinitarian Christianity does make sense from a historical perspective, as the doctrine of the Trinity has been central to the Christian tradition. In its early centuries, Christianity was convulsed by disputes about the exact nature of the Trinity, with adherents of different sects bitterly opposing each other over minor distinctions, as recounted recently in Charles Freeman’s AD 381: Heretics, Pagans, and the Dawn of the Monotheistic State. Such disputes, however, have long since receded away. As a result, I am not sure that the rejection of the doctrine of the Trinity by a number of modern groups makes that much difference today. The United Pentecostal Church International is non-Trinitarian, for example, but it still seems much closer to Pentecostal Trinitarianism than to other non-Trinitarian Christian denominations, such Mormonism, Jehovah’s Witnesses, or Christian Science. 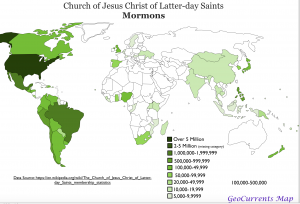 Mormonism, to be sure, is rejected as non-Christian by many evangelical Protestants, but that has more to do with its unique cosmology than its rejection of Trinitarian orthodoxy.* Certain Trinitarian denominations, moreover, veer equally far away from Christian orthodoxy on other essential issues, and thus fit poorly into a unified “Protestant” category. Seventh-Day Adventists, for example, accept the Trinity, but they also deny the immortality of the soul, which seems to me a rather more theologically significant deviation.** 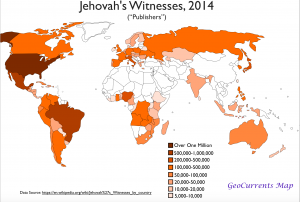 Considering such issues, I think that it is fair to say that three major Christian sects—those with adherents numbering in the millions—diverge so strongly from orthodox theology that they can accurately be described as heterodox. These are as follows: Seventh-Day Adventism, with some 18 million members, Mormonism, with some 15 million members, and the Jehovah’s Witnesses, with some 8 million members. Other heterodox sects, such as Christian Science, may be important but simply do not have enough members to make the list. Christian Science, for example, counts fewer than half a million adherents. 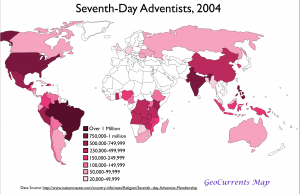 Intriguingly, all three of these major heterodox faiths originated in the United States but are now are highly international. To illustrate their global spread, I have constructed maps of their membership across the world. Unfortunately, some of the information used to make these maps is out-of-date, as I did not have time to track down more recent data.

The most international of these groups is Seventh-Day Adventism, which in 2004 had more adherents in Brazil than in the United States. This faith is well established across Latin America, and has many followers in both sub-Saharan Africa and the eastern half of Asia (particularly in India and the Philippines). The success of the Seventh-Day Adventist church in gaining adherents is perhaps related to its educational program. As noted in the Wikipedia:

Globally, the Adventist Church operates 7,598 schools, colleges and universities, with a total enrollment of more than 1,545,000 and a total teaching staff of approximately 80,000. It claims to operate “one of the largest church-supported educational systems in the world”. In the United States it operates the largest Protestant educational system, second overall only to that of the Roman Catholic Church. The Adventist educational program strives to be comprehensive, encompassing “mental, physical, social and above all, spiritual health” with “intellectual growth and service to humanity” as its goal.

In the United States, Seventh-Day Adventism has gained considerable attention in recent months owing to the fact that it is the faith of Ben Carson, the current front-runner in the Republican Party for the 2016 presidential contest. Although Carson polls very well among evangelical Christians, who actually form his main base of support, some Protestant pastors have expressed serious misgivings about his heterodox faith. 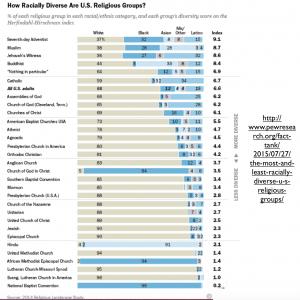 The fact that Ben Carson is both African-American and Seventh-Day Adventist is not unusual. According to a recent Pew survey, Seventh-Day Adventism is the most racially diverse religious sect in the United States, as can be seen in the table posted to the left. It is also interesting, and rather ironic, that the more politically conservative denominations in the United States tend to be more racially diverse that the more liberal denominations. “Mainline” Protestant groups, such as the Episcopalians, Methodists, and Evangelical Lutherans, score particularly low on the racial diversity index.

In terms of racial diversity, Mormonism ranks slightly below average, and thus much lower than either Seventh-Day Adventism or Jehovah’s Witnesses. By the same token, Mormonism’s global reach is somewhat more restricted than those of the other two main heterodox faiths. Sub-Saharan Africa in particular has many fewer Mormons than Adventists or Jehovah’s Witnesses (the Pacific Islands, on the other hand, have more Mormons).

Mormonism’s efforts in Africa were formerly restricted by the fact that the church long retained racist policies, disallowing, for example, ordination into its lay priesthood for men of African background. These policies, however, were abandoned in 1978, due—according to church leaders—to a new revelation from God. Mormon missionaries are now active in a number of sub-Saharan African countries, as parodied in the Broadway musical, “The Book of Mormon.” But break-away Mormon sects do not necessarily accept the change; as noted in the Wikipedia, “Some Mormon fundamentalist sects that split from the LDS Church in the early 1900s continue to teach that the priesthood should be withheld from black people because of their cursed state, and that the LDS Church’s reversal is a sign of its apostasy.” Mormon Fundamentalists, however, count only around 20,000 members; they tend to receive more attention than such numbers would seemingly justify primarily because of their on-going practice of polygamy. 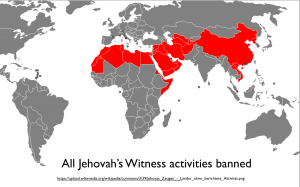 The main spatial pattern found in these heterodox Christian denominations is their substantial membership across the Americas. The majority-Catholic countries of Latin America, along with the Philippines, all figure prominently on these maps. These three faiths have all also failed to spread in the Muslim stronghold of North Africa and the Middle East, as would be expected (most of the countries in this region ban the activities of the Jehovah’s Witnesses.) It is also notable that Seventh-Day Adventism and the Jehovah’s Witnesses have gained considerable success across much of sub-Saharan Africa. Intriguingly, the Jehovah’s Witnesses have been more successful than the others in gaining converts in Europe.

*As explained in the Wikipedia: “Mormon cosmology presents a unique view of God and the universe, and places a high importance on human agency. In Mormonism, life on earth is just a short part of an eternal existence. Mormons believe that in the beginning all people existed as spirits or “intelligences,” in the presence of God. In this state, God proposed a plan of salvation whereby they could progress and “have a privilege to advance like himself.” The spirits were free to accept or reject this plan, and a “third” of them, led by Satan rejected it. The rest accepted the plan, coming to earth and receiving bodies with an understanding that they would experience sin and suffering.”

** As explained in the Wikipedia, Seventh-Day Adventist beliefs include: “ Wholistic human nature (fundamental beliefs 7, 26)—Humans are an indivisible unity of body, mind, and spirit. They do not possess an immortal soul and there is no consciousness after death (commonly referred to as “soul sleep”).) Conditional immortality (fundamental belief 27)—The wicked will not suffer eternal torment in hell, but instead will be permanently destroyed.)”