Some journalists and scholars have tried to link conflicts in Ethiopia and Eritrea to religious divides that are either insignificant or nonexistent. The most egregious example was that of Samuel Huntington in this famous (infamous?) book, The Clash of Civilizations (1996). Huntington portrayed the war that was then being waged between Ethiopia and Eritrea as a religious/civilizational conflict, one pitting Christian Ethiopia against Muslim Eritrea. Maps based on Huntington’s work thus depict Eritrea as a Muslim country (see the figure below). Most actual assessments, however, find that Eritrea is roughly half Muslim and half Christians, although some sources claim that the country is roughly two-thirds Christian, with almost 58 percent of its people adhering to the Oriental Orthodox Tewahedo Church. But nothing is clear about Eritrean demography; figures for the country’s total population range from 3.6 to 6.7 million. 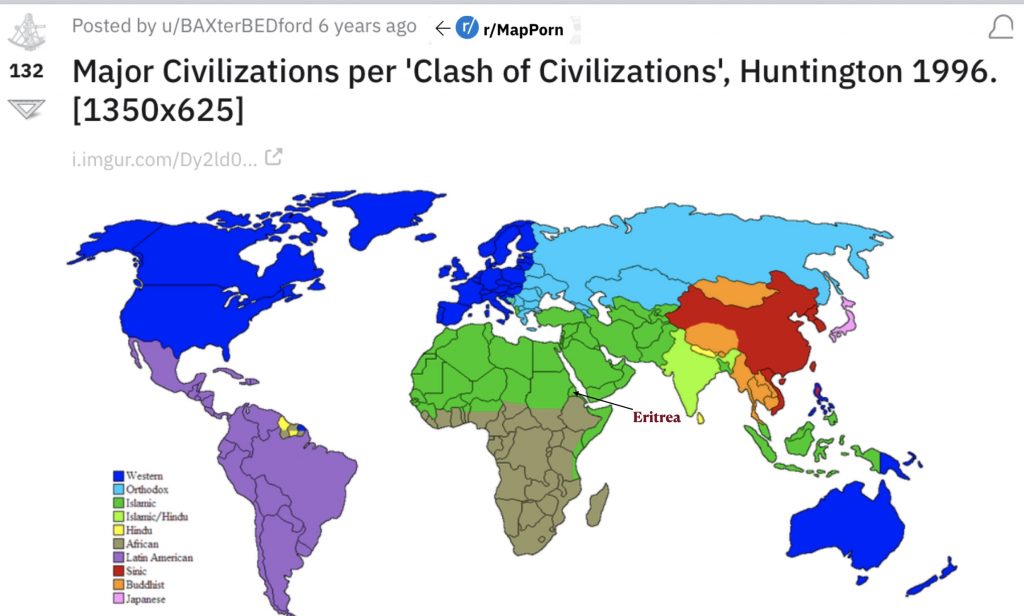 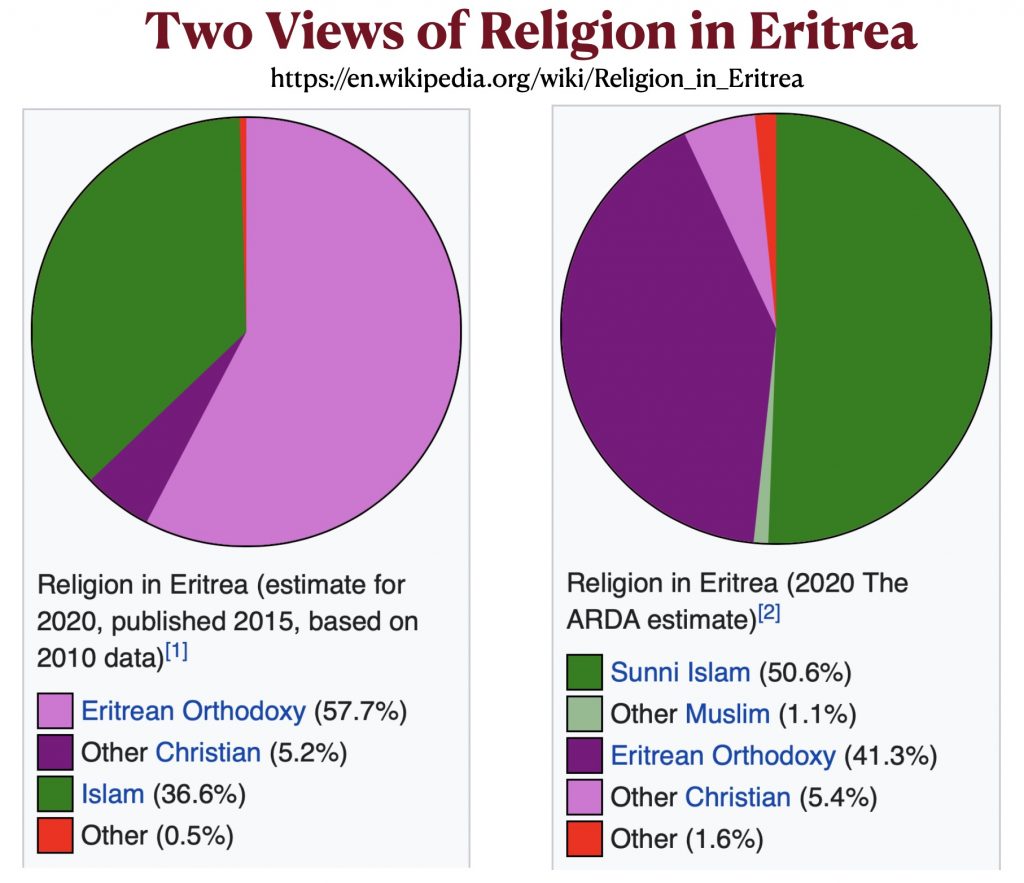 The current Tigray War in northern Ethiopia is based largely on ethnic politics but has little to do with religion. The Tigrayans are overwhelmingly Ethiopian Orthodox, but the Amhara, often regarded as their main opponents, mostly follow the same religion. To be sure, a sizable Muslim Amhara minority does exist, but this religious division does not play a role in the current conflict. Ethiopia’s Amharic-speaking Muslim population is concentrated in the South Wollo Zone, where almost three quarters of the population follows Islam. This Muslim Amhara area is easily seen on a fantastic map of religion in Ethiopia made by an anonymous cartographer and posted on the MapPorn section of Reddit. In the figure posted below, I have lightly edited this map to highlight the Tigray and Amhara regions. 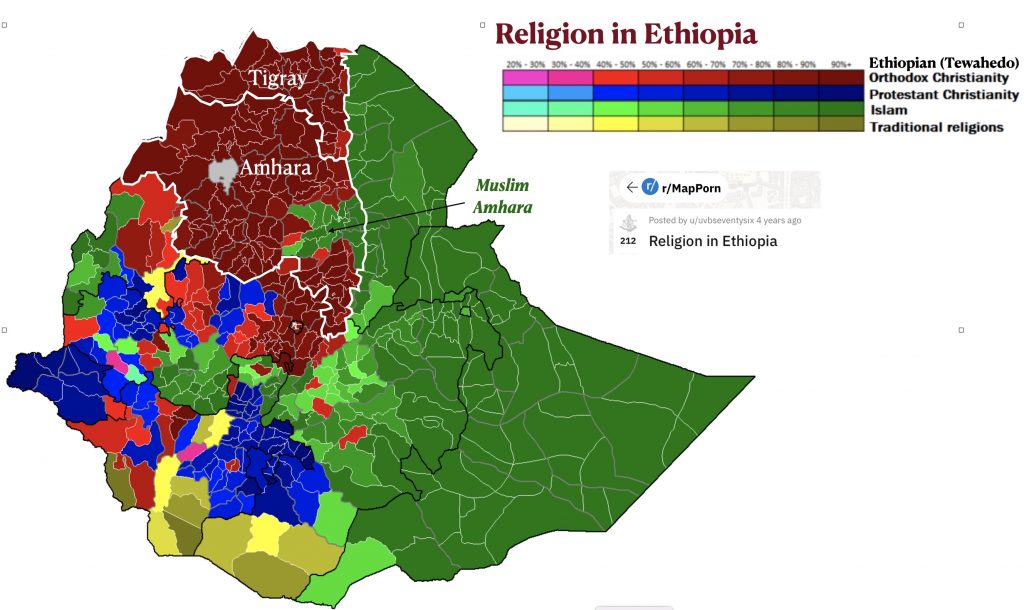 The Oromo, forming Ethiopia’s largest ethnolinguistic group, have played a major role in the country’s recent political dramas. Ethiopia’s prime minister, Abiy Ahmed, is Oromo, but the militant Oromo Liberation Front (OLF) has sided with the Tigrayan rebels against the government. Abiy seeks pan-Ethiopian civic nationalism, whereas the OLF champions Oromo self-determination and contains ethno-nationalist elements that would prefer independence. Despite such political divides, Oromo ethnic identity remains strong. Yet the Oromo are deeply split by faith. In the Oromo Region (Oromia), which is roughly 88 Oromo-speaking, 48 percent of the population follows Islam, 30 percent Ethiopian Orthodoxy, and 18 Protestant Christianity, mostly Pentecostalism (Abiy Ahmed is a devout Pentecostal). As the MapPorn religion map shows, different parts of Oromia have distinct religious complexions, with some zones heavily Muslim, others heavily Orthodox, others heavily Pentecostal, and others mixed. In the far south of the region, however, most people evidently follow Waaqeffanna, the indigenous Oromo faith. It is not coincidental that this area is commonly regarded as the original homeland of the Oromo people. As the Oromo moved north into the Ethiopian highland in the early modern period, they assimilated local populations into their ethnolinguistic group, but were themselves often religiously assimilated into the Muslim and Ethiopian Orthodox communities of the people that they were assimilating. (Pentecostalism came later.) 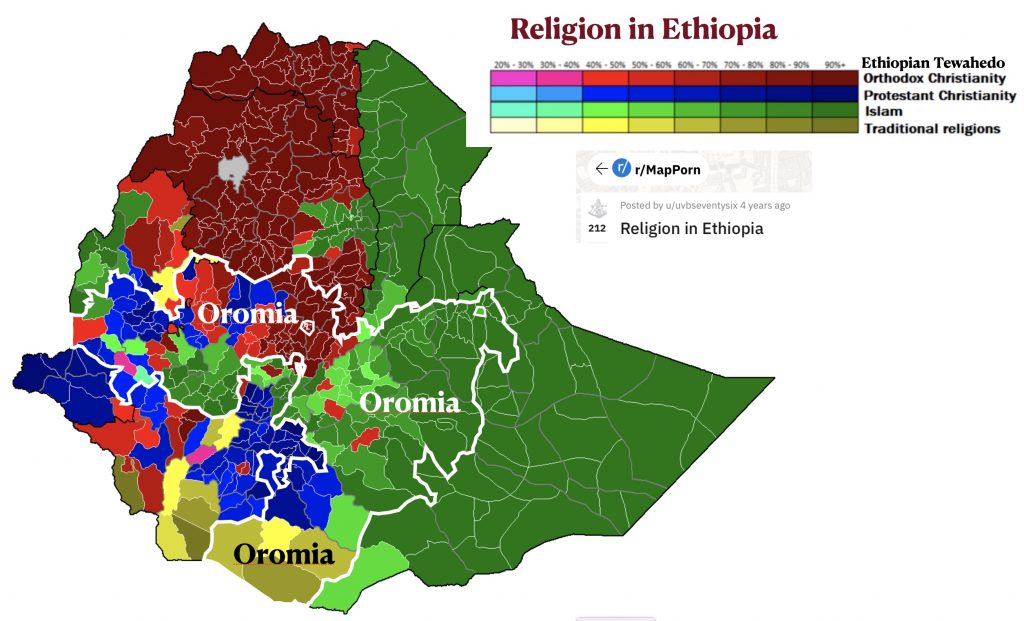 The Wikipedia article on Oromia claims that three percent of its people follow Waaqeffanna, the indigenous religion. Standard sources hold that only around a half a percent of Ethiopia’s total population adheres to “traditional” faiths of all varieties. I suspect that the actual figure is much higher. As the MapPorn map indicates, many of the peoples in the southern part of the highly diverse SNNPR Region (Southern Nations, Nationalities, and Peoples) follow traditional religions. Pentecostalism Christianity, however, has been spreading rapidly here in recent years. Indigenous faiths might disappear, but revivals are always possible.