Several recent posts have mentioned the recent growth of Pentecostal Christianity in Ethiopia, noting that a significant portion of the Oromo people, Ethiopia’s largest ethnic group, now follow the faith. Pentecostalism originated in Los Angeles, California in the early twentieth century and is now growing explosively in many parts of Latin America and sub-Saharan Africa. Most Ethiopian Pentecostals are members of smaller ethnolinguistic groups that are concentrated in the southern highlands. One of these is the Sidama, Ethiopia’s fifth largest group, numbering some four to five million. After a long period of lobbying and protests, the Sidama were finally granted their own semi-autonomous region in 2019. According to Ethiopia’s 1994 national census, 67 percent of the Sidama then followed Protestant Christianity, with the rest being divided among followers of traditional beliefs (15 percent), Islam (7.7 percent), Catholicism (4.6 percent), and Ethiopian Orthodox Christianity (2.3 percent). The 2007 census, however, found that 84.4 percent of the people in the Sidama region were Protestants. The MapPorn map posted below indicates that over much of the Sidama Region the figure is over 90 percent. 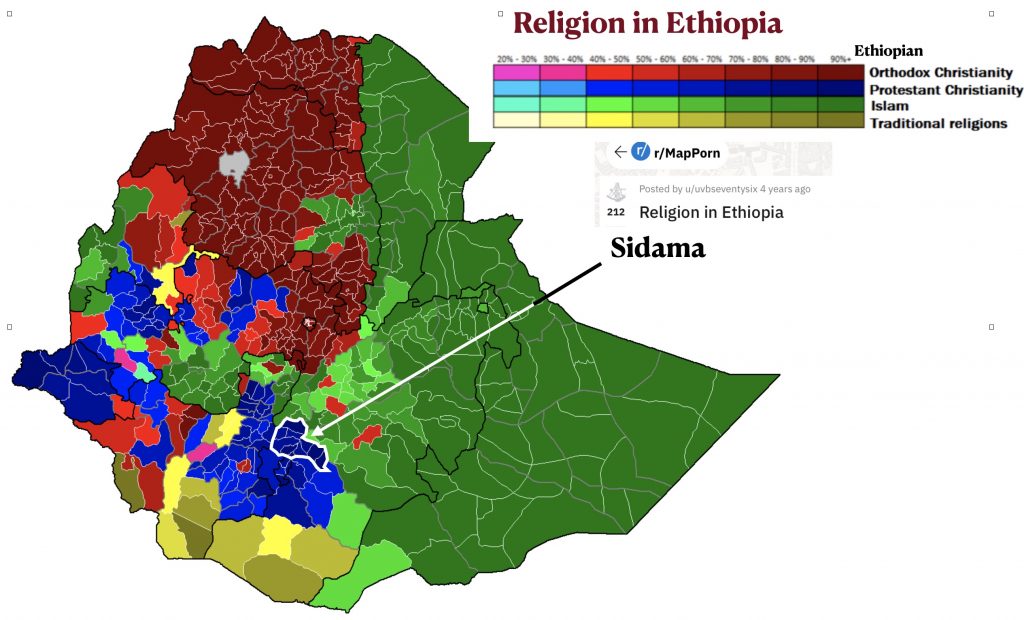 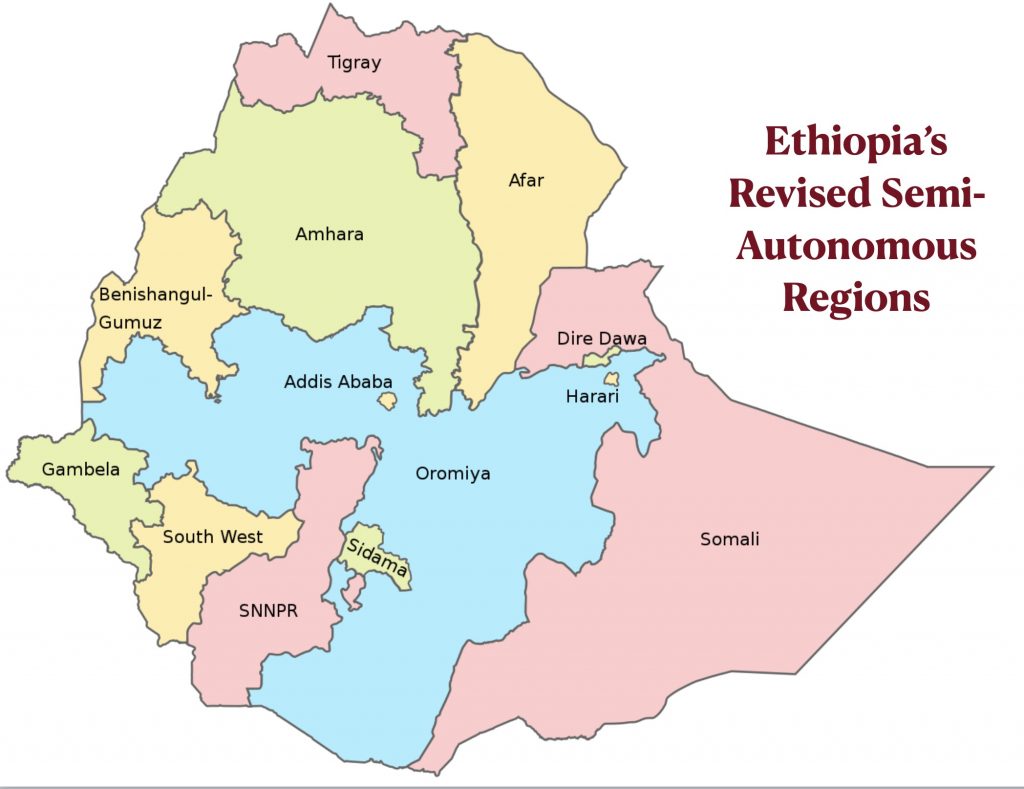 Christianization of the Sidama people was a complicated process involving several missionary groups. It seems that the region’s different Protestant denominations have recently converged on the highly emotional (or spiritual) mode of worship associated with Pentecostalism. According to the Christian proselytizing organization called the Joshua Project:

The Sidama were evangelized in the early-mid 1900s by Kambata* Christians and later, by Norwegian and Danish Lutheran and SIM missionaries. The first Kambata missionaries were martyred by the Sidama, but the Kambata persevered and finally, a small group of Sidama Christians resulted. Now, Sidama is largely Christian including a number of Orthodox. Nearly a tenth are Muslim, non-Christian cults, and traditional religionists. The main churches, in order of size are: Mekane Yesus (Scandinavian Lutheran roots), Kale Hiwot (SIM, Baptist roots), Orthodox, Hiwot Birhan (Swedish/Finnish Pentacostal roots), Mulu Wengel (Full Gospel roots), and Catholic. Over the past 10-15 years, most Protestant churches have adopted a charismatic/pentecostal, style of worship. Youth choirs are influential in the church and keyboards are the choice of musical instruments of church worship.

The Sidama people are significant in other respects. Their land is one of the mostly densely populated parts of Ethiopia, yet they have not suffered much from famine or severe malnutrition, owing largely to their stable crop, enset (see the previous post on this crop). Fermented cow’s milk is another important part of the Sidama diet. Although fermented dairy products are often associated with Central Asia, they are also widespread in Africa, particularly Ethiopia. As one article on the subject notes, “In Ethiopia, a large proportion of milk is consumed in the fermented form through the application of traditional fermentation methods. The main fermented milk products include ergo (sour milk), ititu (milk curd), ayib (cottage cheese), neter kibe (spiced butter), kibe (traditional butter), aguat (whey) and arerra (sour defatted milk).” As most Ethiopians, like most Mongols. are lactose intolerant, fermentation is needed to make milk digestible. 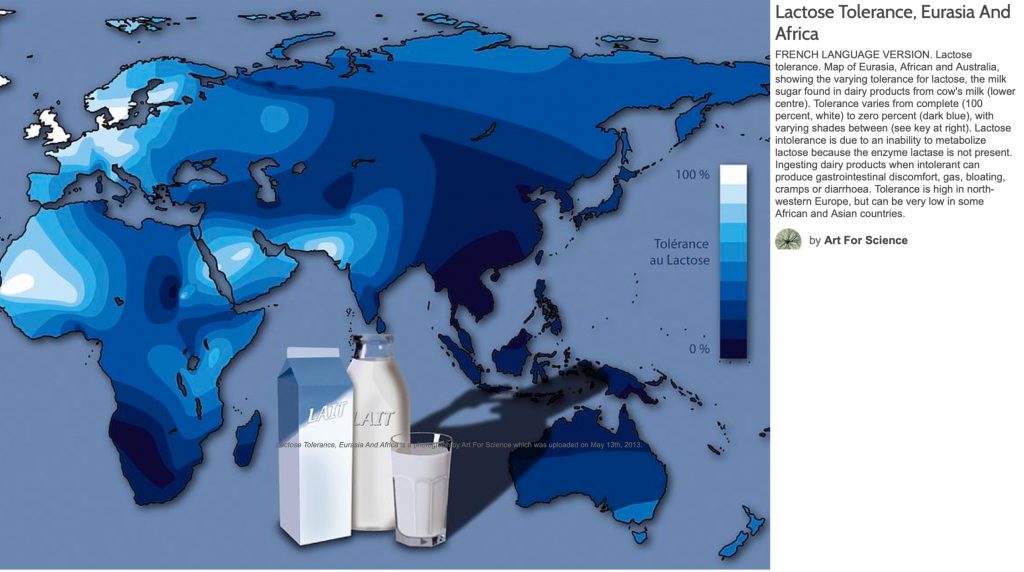 The Sidama region is also noted for its fine arabica coffee, the main local cash crop. Coffee is Ethiopia’s most important export by a wide margin, and the Sidama Region produces over 40 percent of the marketed national crop. When global coffee prices drop, hardship comes to the Sidema people. 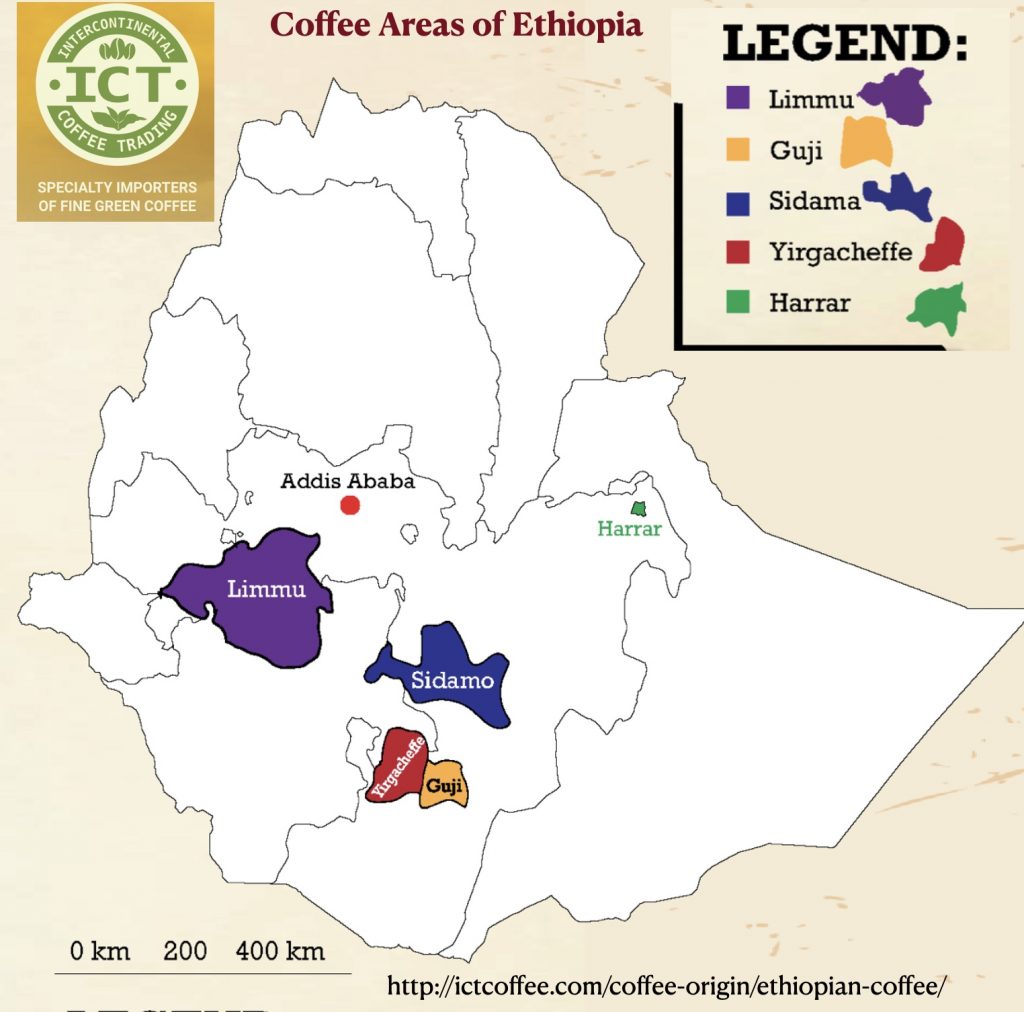 It is possible that the Sidama people were associated with the domestication of the coffee plant. The first commercial coffee plantations were probably located in Yemen, but the southern highlands of Ethiopia has the best claim to being the site of origination. One prominent but evidently apocryphal legend links coffee consumption to a ninth-century Ethiopian goatherd who noticed how frisky his animals became after eating the plant’s berries. Other stories connect coffee to the Oromo people. An Atlantic article on coffee domestication cites “a tradition of an Ethiopian tribe, the Galla, who regularly consume ‘energy balls’ made by blending animal fat and macerated coffee cherries” (“Galla” is an Amharic term for the Oromo, but is now avoided for its pejorative connotations). A Wikipedia article on the history of coffee claims that “according to one legend, ancestors of today’s Oromo people in the region of Jimma in Ethiopia were the first to recognize the energizing effect of the coffee plant.”

The main problem with these latter two accounts is the fact that the Oromo did not enter the Ethiopian highlands until the early modern period, whereas coffee was probably consumed and cultivated much earlier. The Sidama themselves had to flee from their original homeland, located further to the east, to avoid being assimilated by the Oromo in the sixteenth century (many of them probably were). Further to the west, the Jimma area, noted by Wikipedia as a possible locus of coffee domestication, was the site of the Kaffa Kingdom of the Kaffa people. This kingdom was partially overrun by the Oromo in the eighteenth century and then finally conquered by the Ethiopian (Abyssinian) Empire in the late nineteenth century. The Kaffa people, who now number a little less than a million, are also heavily dependent on coffee cultivation, and also suffer when global prices drop.

*The Kambata are another ethnic group of the Ethiopia’s southern highlands.