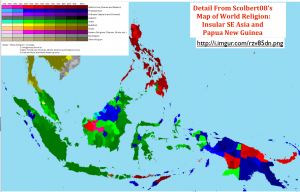 Scolbert08 does an excellent job of mapping the religious complexity of Insular Southeast Asia and Papua New Guinea. I have therefore posted a detail of his or her map of world religion that focuses on this region, both with and without my own annotations. Many interesting and important spatial patterns of religious affiliation are revealed on the map.

Scolbert08’s map does not show the presence of animism (mapped as “other”), which is widespread across the eastern portion of the region. That is to be expected, however, because animism is essentially illegal in Indonesia, as the government recognizes only six official faiths: Islam, Protestant Christianity, Roman Catholicism, 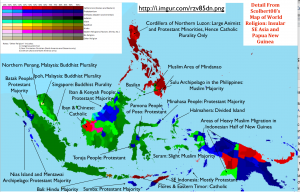 Buddhism, Hinduism, and Confucianism. Missionaries, moreover, are active in most areas of traditional animism, resulting in widespread conversion, which can be rather superficial. The Wikipedia article on a specific variant of animism found on the island of Sumba nicely frames the situation:

The Marapu religion (also known as Marafu in Sumba) is a form of ancestral religion that is practiced mainly in the island of Sumba in Indonesia. Marapu is also practiced in many more remote areas of Sumba and Flores. Both the Christians and Muslims on these islands tend to combine their faiths with Marapu. Since Marapu, like Kaharingan of the Dayaks [Iban], is not an official religion of Indonesia, and all Indonesian citizens are required to identify as of one of a member of the sanctioned religions by law, members have chosen either Christianity or Islam to self identify.

The island of New Guinea, which is politically divided between Indonesia in the west and the independent state of Papua New Guinea on the east, has an interestingly symmetrical appearance on Scolbert08’s map, with Catholicism widespread in the northeast and southwest and Protestant Christianity prevalent in the southeast and northwest. This pattern reflects, of course, the efforts of different groups of Christian missionaries. One might be surprised that Catholic missions were so widespread and successful in eastern Indonesia, which had been colonized by the Dutch, as the Netherlands is usually considered to be an historically Protestant (Calvinist) country. But the southern Netherlands is traditionally Catholic, and as recently as 1970 some 40 percent of the Dutch professed Roman Catholicism (today the country is most irreligious, as reflected in Scolbert08’s map). Dutch and Flemish Jesuit missionaries played an important role in converting animists in many remote areas of Southeast Asia. This was the case in the highlands of northern Luzon in the Philippines, where I encountered Flemish priests in the 1980s. The Muslim majority and plurality areas in western New Guinea seen on Scolbert08’s map largely reflect recent migration from Java, a phenomenon that has generated pronounced ethnic and religious tensions. I am a bit surprised that Papua New Guinea is shown as so heavily Christian, as animism there is very widespread. Many Papuan Christians, however, are recent converts who have by no means entirely abandoned the beliefs of their ancestors.

In peninsular Malaysia, Scolbert08’s map shows a Muslim majority in the east and a Muslim plurality in the west. This pattern is to be expected, as most Malaysian of Chinese and Indian descent, the vast majority of whom are non-Muslim, live in the western half of the peninsula. But only the area around the city of Ipoh, which is 41 percent Chinese and 14 percent Indian, stands out for having a Buddhist plurality, reflecting the local Chinese imprint. Although it is barely visible on the map, the northern part of Penang, also heavily Chinese, is also colored yellow for Buddhism. The same pattern holds in the Chinese-majority city-state of Singapore.

In many parts of insular Southeast Asia, large numbers of people of Chinese background have been converting to Christianity. The sizable Roman Catholic area seen on the map in western Borneo reflects the conversion of both the indigenous Iban (Dyak) people and local Chinese residents. Pontianak, the capital of the Indonesian province of West Kalimantan, has a Chinese majority, although the province of West Kalimantan as a whole has a slight Muslim Malay majority. The Malaysian state of Sarawak in northern Borneo, on the other had, has a clear Protestant plurality, which largely reflects the conversion of the indigenous Iban people. (This Protestant zone on the map extends across the border into Indonesia, where the almost entirely Christian Kenyah people are located). Although Sarawak as a whole has historically experienced relatively little religious tension, that situation may be changing. As analyzed in a 2014 article in The Malaysian Insider:

Such changes in attitude reflect a creeping extremism that is infecting Sarawak’s Muslim community – one that is often held up as an example of tolerance and inclusivity that their brethren in the Malay peninsula should learn from. There is now a growing worry that such attitude – imported from across the South China Sea – threatens to rupture the social glue that has bound Sarawak’s diverse community. This is even while Sarawak’s Muslim leaders continue to insist that their minority community is still moderate and able to embrace its more populous non-Muslim neighbours.

Tensions between Muslims and Christian have been much more pronounced in eastern Indonesia, particularly in central Sulawesi and in the Maluku Islands, although the situation is much calmer now than it had been at the turn of the millennium. I had expected the map to show more religious mixing in these areas, but instead most areas are indicated as having either a clear Muslim or a clear Christian majority. Note, however, that the Poso region of central Sulawesi, where some of the most extreme violence occurred, is depicted as having a relatively thin Christian majority, which means that it has a substantial Muslim minority. The opposite pattern is found on the island of Seram (Ceram, formerly), which is another site of pronounced religious tension. As explained in the Wikipedia:

Seram has been traditionally associated with the animism of the indigenous Alfur (or Nuaulu), a West Melanesian people who reputedly retained a custom of headhunting until the 1940s. Today, however, most of the population of Seram today is either Muslim or Christian due to both conversion and immigration. Seram was affected by the violent inter-religious conflict that swept Maluku province starting in late 1998, resulting in tens of thousands of displaced persons across the province but after the Malino II Accord agreement tempers cooled. Seram has been peaceful for many years but towns like Masohi remain informally divided into de facto Christian and Muslim sections. Around 7,000 people belonging to the Manusela tribe follow Hinduism.* 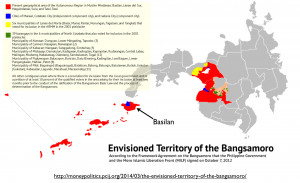 The Muslim majority area of the southwestern Philippines is accurately shown as relatively small on Scolbert08’s map. What is more significant, however, is the sizable area of Catholic plurality in the areas to the south and east, which indicates substantial Muslim (and animist) minorities. The province of Sultan Kudarat, as its name indicates, formerly had a Muslim majority, but it is now roughly 56 percent Catholic and 10 percent Protestant, a change that has occurred mostly because of immigration from Christian areas of the Philippines. Such changing patterns of religious affiliation help explain the religious/political violence that plagues the region. I am 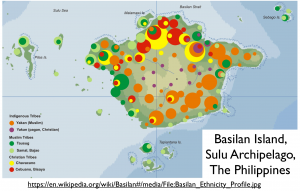 surprised, however, that the map does not show a Christian zone in the north-central portion of Basilan, the northernmost island of the largely Muslim Sulu Archipelago. This area has been an issue of contention between the Philippine government and Islamist insurgents in the stalled-out negotiations over the creation of a Bangsamoro Autonomous Region in country’s Muslim-majority districts.

The largest Protestant group in Indonesia is the Huria Kristen Batak Protestan (HKBP), or Batak Christian Protestant Church, which is centered in the land of the Batak people in northern Sumatra around Lake Toba. Conversion began here in the mid 1800s, owing largely to the efforts of the German Rhenish Missionary Society, which was formed from a union of Lutheran and 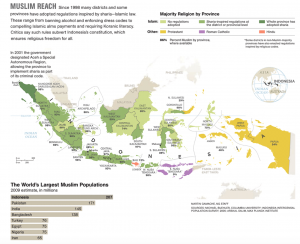 Reformed (Calvinist) churches. Tensions have recently been mounting between the Christians of North Sumatra and the Muslims of Aceh (to the north), which is an autonomous region of Indonesia under strict Sharia law. As reported in a recent Tempo article:

The attack [on] Deleng Lagan Batak Protestant Church (HKBP) in Gunung Meriah, Aceh Singkil, on Tuesday (13/10) has to be condemned.

The incident once again shows that in a country with the motto ‘Bhineka Tunggal Ika’ (unity in diversity), intolerance is still fast growing.

Yet, this is not the first incident that happened in Singkil, Aceh, which share a border with North Sumatera province.

In September 2005, a church in Siompin Village, Surou Sub-District was also burned down. The attack was triggered by the same reason: local residents objected to a private house made as a place of worship.

The conflict should not have happened if the regional government and the police could take a firm and strong action.

Regency governments have indeed arranged a meeting between religious figures and the people. The meeting eventually agreed to demolish a number of ‘troubled’ churches on October 18. However, the tension was already heated up. Provocation has also been spread.

Members of the HKBP and of other Christian demonization as well have been increasingly complaining of discrimination across much of Indonesia. They have been particularly galled by the fact that the government has been shutting down existing churches and preventing the construction of new ones in Muslim majority areas, particularly in metropolitan Jakarta. According to a May, 2015 article in GlobalPost:

Although more than 85 percent of Indonesians identify as Muslim, Protestantism and Catholicism are two of the nation’s approved faiths, helping give Indonesia its reputation as a pluralistic democracy. Even so, many local governments are shutting down churches as politicians crumble under pressure from their Muslim constituents.

“They want to stop the increasing number of churches, and if possible, reduce it,” said Andreas Harsono, Indonesia researcher for Human Rights Watch. “That’s why, in the last 10 years, 1,000 were closed.”

*The assertion that a small tribe on this remote island follows Hinduism is quite surprising, but unfortunately I have not been able to find much information on this matter. Here is what the Wikipedia tells us:

The Manusela [of Seram] follows the syncretic faith of Naurus, which might have come from the Aluk’ To Dolo faith. The Naurus faith is a combination of Hinduism and Animism, but in recent years they also have adopted certain Protestant principles. A few Manusela have also adopted Protestanism as well. Not much is known about their religion about them, but their religion may include worshipping of Hindu and Animist gods, with this influence coming from the Mindanao during the early periods, and presence of Hinduism is evidenced from the fact that archaeologists have found several statues of Hindu gods in Mindanao.