Ethiopia is a predominantly Christian county, with around two-thirds of its people belonging to a Christian church. Roughly 44 percent follow Ethiopian Orthodox Christianity (the Tewahedo Church), and little over 20 percent belong to a Pentecostal denomination. 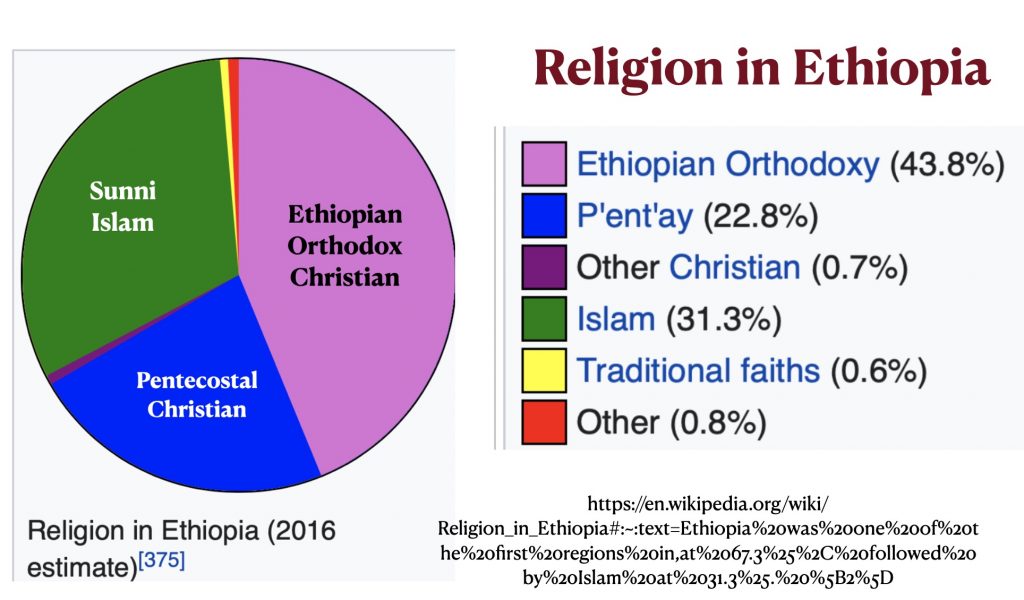 Many sources erroneously depict the Tewahedo Church as part of the Eastern Orthodox branch of Christianity, putting it in the same category as Greek Orthodoxy, Russian Orthodoxy, Serbian Orthodoxy, and so on. Even highly reputable publications such as the Pew Research Center make this error (see the figures posted below). In actuality, Eastern Orthodoxy is much more similar to, and historically intertwined with, Roman Catholicism than it is with Ethiopian Christianity. Eastern Orthodoxy did not split from Roman Catholicism until 1054 CE, and even then the divorce was more a political than a religious matter. (The main theological disagreement stemmed from a single Latin term, filioque.*) The Ethiopian Church spilt from the main Christian stem much earlier, in 451 CE. It did so as a result of theological decisions reached at the Council of Chalcedon. At issue was the relationship between the human and divine natures of Jesus. The council decreed that Jesus is one person in two natures, whereas the Ethiopian church insisted that Jesus is fully divine and fully human in one nature. Although this distinction now strikes most Christians and non-Christians alike as insignificant if not beside the point, such Christological controversies mattered a great deal in late antiquity. 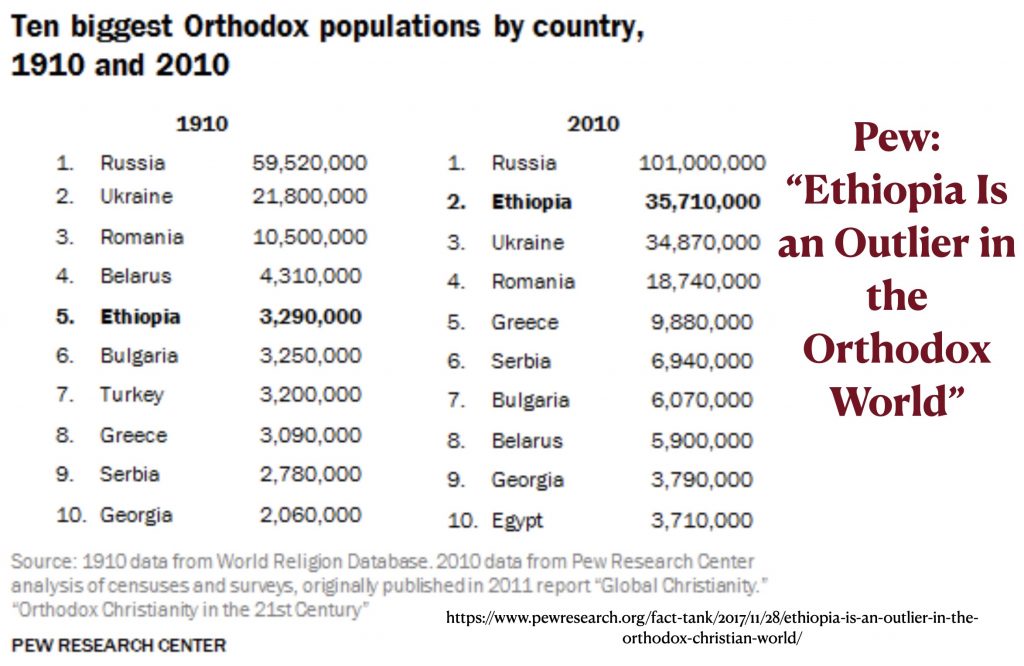 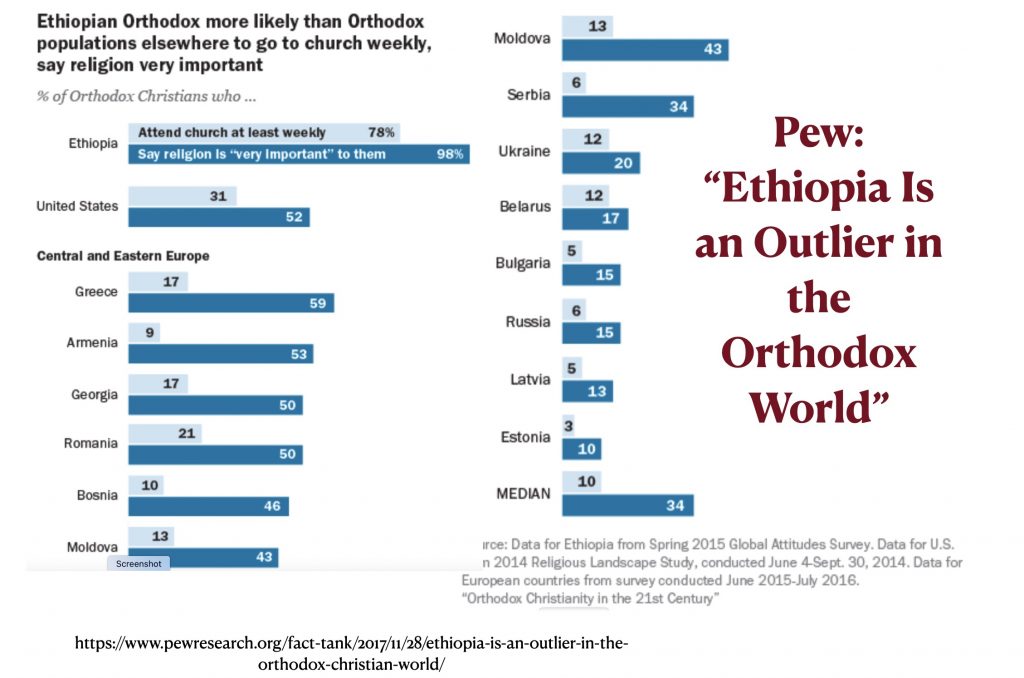 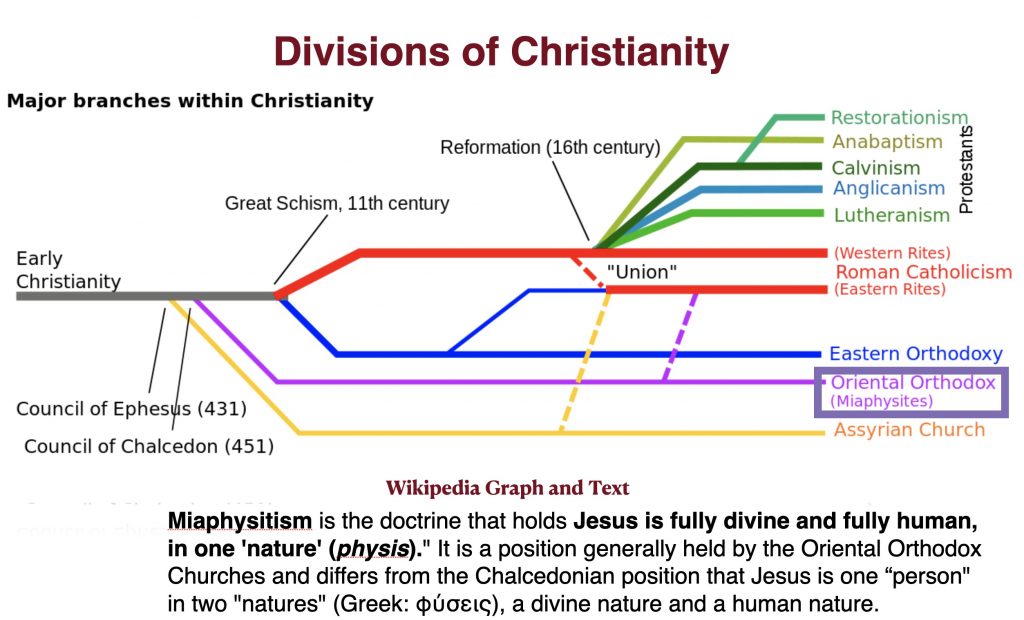 The Ethiopians were not the only Christians to reject the decisions made at Chalcedon. The Armenian Apostolic Church and the Coptic Church of Egypt also maintained that Jesus has a single nature, as did several other eastern sects. Today these churches are grouped together under the category of “Oriental Orthodoxy” – not to be confused with Eastern Orthodoxy. More properly, they are described as constituting Miaphysite Christianity, a term that capture the crucial “one nature” aspect of their theology. The Ethiopian Tewahedo Church is most closely connected to the Coptic Church of Egypt, as both follow the Alexandrian Liturgical Rites (so too does the Eritrean Tewahedo Church, which split from that of Ethiopia in 1991 on geopolitical grounds.) 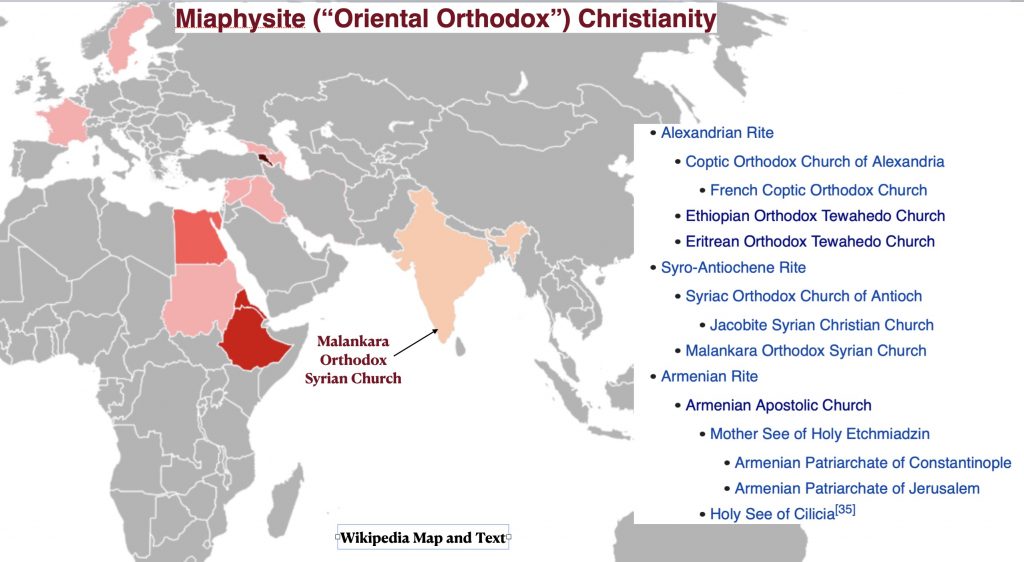 Arguably, the Tewahedo Church has closer ties with Protestant Christianity, especially Lutheranism, than it does with Eastern Orthodoxy. As the figure posted below shows, Martin Luther was influenced by Ethiopian Christianity, arguing that it adhered more closely to the original teachings than did Roman Catholicism. Luther evidently had close contacts with an Ethiopian cleric named Michael the Deacon, and they discovered that they agreed about many issues of religious belief and practice, if not on the nature of the Trinity. 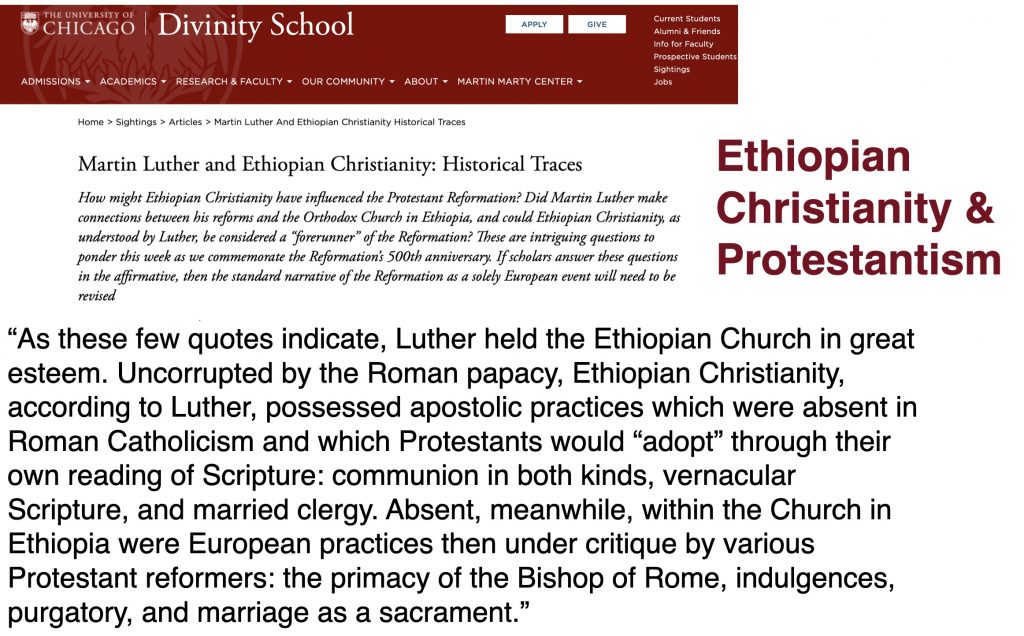 Ethiopia has an unusual cultural/religious link to England, Catalonia, and the Republic of Georgia, as each polity has the same patron saint: George. Saint George is famed for killing a dragon in all four lands, but, unsurprisingly, he is given a very different physical appearance in Ethiopian religious art than in that of Western Europe. 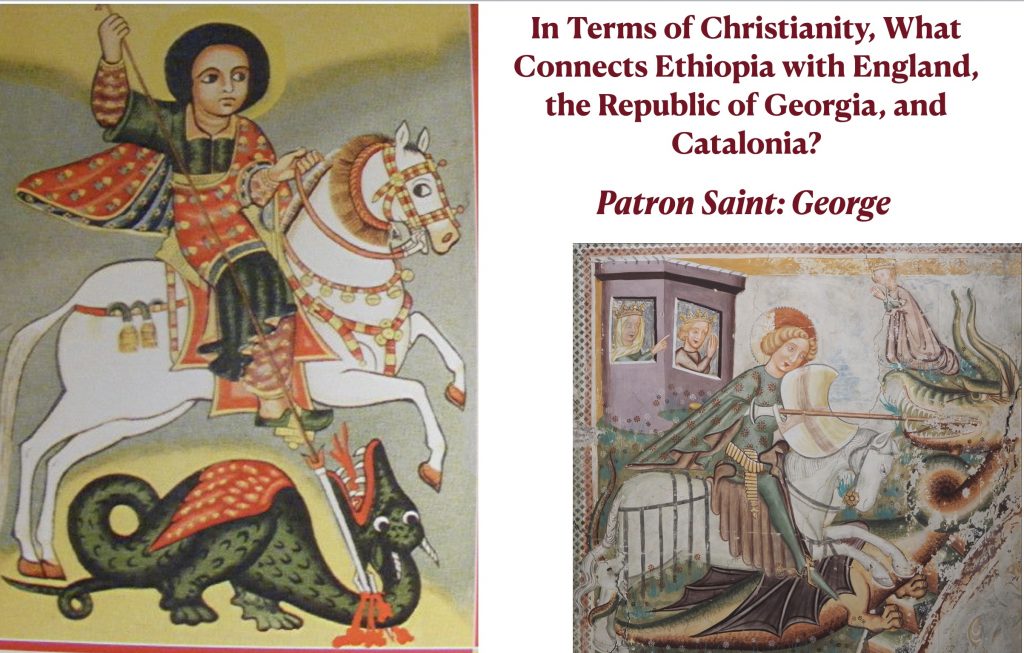 *As is explained in the Wikipedia article on the term, “In the late 6th century, some Latin Churches  added the words “and from the Son” (Filioque) to the description of the procession of the Holy Spirit, in what many Eastern Orthodox Christians have at a later stage argued is a violation of Canon VII.”