As noted in the previous post, the Brazilian states of São Paulo and Rio de Janeiro have distinctive voting patterns. In the 2014 presidential election, São Paulo voted strongly for the center-right challenger Aécio Neves, whereas Rio de Janeiro was the only state in southeastern Brazil to support the incumbent, Dilma Rousseff. The two states are similar in some respects, as they are both prosperous by Brazilian standards, densely populated, and located in the same general area. But the rivalry between the states of São Paulo and Rio de Janeiro—and between their two main cities of the same names—is intense. 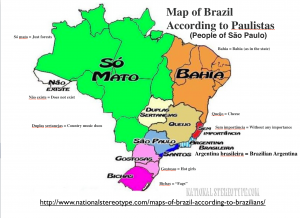 In looking for maps that might help explain the regional patterns of the recent Brazilian election, I came across an interesting cartographic collection that sheds light on this important regional rivalry. The site, called National Stereotype, takes on all manner of national and regional stereotypes with a tone of good-natured amusement. A 2013 post on Brazil includes six maps depicting visions of the country from the perspectives of several regions. Here the competition between São Paulo and Rio de Janeiro is clearly evident.

Argentina brasileira = Brazilian Argentina. The rivalry between paulistanos/paulistas (those from the city/state of Sao Paulo) and cariocas/fluminenses (those from the state/city of Rio de Janeiro) is legendary. As legendary as the rivalry/hatred Brazilians have against Argentineans, hence the name. 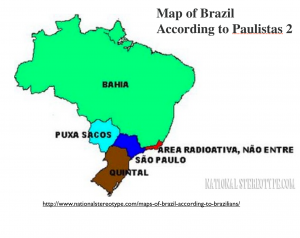 Other intriguing features of the map include the label “does not exist” for the remote Amazonian state of Acre (home of the noted politician Marina Silva), and the designation of Rio Grande do Sul as a land of male homosexuality. According to National Stereotype, other Brazilians often make fun Rio Grande do Sul, a state with its own distinctive voting patterns (see the comments on the previous GeoCurrents post). A second map showing a Paulista perspective is more stripped down—and more hostile to Rio, which is designated as a radioactive zone that one should not enter. 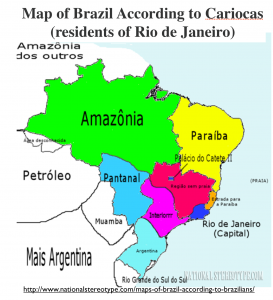 The map showing the perspective of the residents of Rio de Janeiro, or Cariocas, seems much less insulting to the regional rival, as it merely labels São Paulo as “Interiorr.” But as National Stereotype notes, the “Paulista/caipira accent draws the “r”. The interior is the hinterlands of Brazil, and cariocas think paulistas are hillbillies or rednecks.” Note that “Argentina” is used again as a term of disdain, in the case for the three southernmost states of the country. On this map, Acre in the far west is deemed an “unknown area.” Note as well that the maps showing the view from either Rio de Janeiro or São Paulo reduce northeastern Brazil to one state, although Paraíba is used in the former case and Bahia in the latter. The description of the important state of Minas Gerais on the Rio map as “Region without beaches” is telling; as National Stereotype puts it:

To most cariocas … the beach is everything. So a big state with lots of people and without beaches like Minas Gerais is seen as very puzzling or boring. Why would people choose to live there? 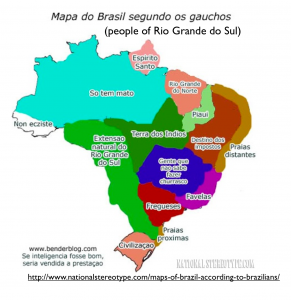 The map showing the perspective of the residents of Rio Grande do Sul, who are known in Brazil as Gauchos, also features beaches prominently, both those in neighboring Santa Catarina and those of the faraway northeast, the latter designated as Praias distantes, or “distant beaches.” The northeastern interior, on the other hand, is disparagingly called Destino dos impostos, or “destination of [our] taxes.” Rio de Janeiro is more insultingly labeled Favelas, or “slums,” while the term used for São Paulo refers to a long-standing football (soccer) rivalry. Yet again, the existence of Acre is jokingly called into question, with an intentional misspelling. Rio Grande do Sul itself is deemed the land of civilization and given a huge extension to the north. Its northern counterpart, Rio Grande do Norte, occupies a prominent position on the map but not in the correct location, as it is actually two states to the east of Piauí. Minas Gerais is insulted here for the poor quality of its grilled meat: “Gente que não sabe fazer churrasco” (“people who don’t know how to barbeque”). This may seem to be a rather feeble insult, but barbequing is highly regarded in Rio Grande do Sul. 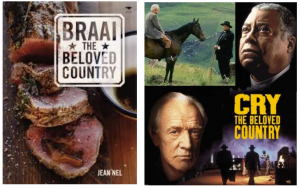 I wonder what the Gauchos of Rio Grande do Sul would think of South Africa’s tradition of meat grilling, known as braai, which is something of an obsession in the Afrikaner community. One can see its significance in the title of a recently published cookbook, which refers to the title of a famous South African novel.