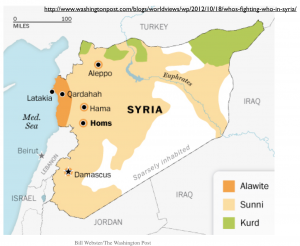 Most maps that show the distribution of ethnic groups within particular countries are relatively simple, depicting a few discrete populations within large, contiguous blocks of territory. The distinguishing characteristics of such groups are rarely specified. A good example of such a useful yet overly simplified map is the Washington Post’s portrayal of Syria posted here. This map reduces the complex mosaic of Syria to three groups, two based on religion (Sunni and Alawite) and the other primarily on language (Kurd). But as most Syrian Kurds are Sunni Muslims, the portrayal is somewhat misleading. A better key would have labeled the tan color as indicating the distribution of Sunni Arabs, although in actuality many non-Arab (as well as non-Muslim) communities are scattered across this large swath of Syrian territory. 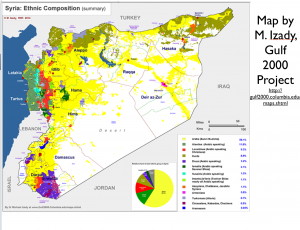 But an internet image search of “Syria ethnicity map” returns a sizable number of far better maps that depict vastly more intricate patterns. As it turns out, most of these maps were either made by, or based on the work of, Michael Izady, the word’s most accomplished cartographer of cultural matters. On the Gulf 2000 website that features Izady’s work, one can find several superb maps of ethnicity in 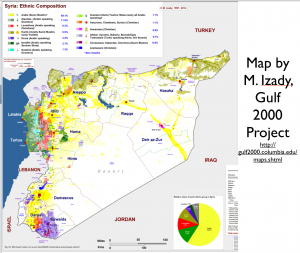 Syria (and in many other countries as well). A small-format summary map shows the basic patterns, breaking down the population of Syria into thirteen groups, with demographic data provided in an accompanying chart and table. Izady’s large map of Syria’s ethnic composition provides far more information. Although impossible to tell from my reproduction here, the map is gargantuan. As a result, one can focus in on particular areas without losing resolution, as can be seen in the map details posted here. The map’s key, moreover, points to the complex blending of language and religion that form the foundation of ethnic identity in this part of the world. On the actual map itself, a brief essay on ethnicity provides a sophisticated conceptual framework as well as a bit of historical background. 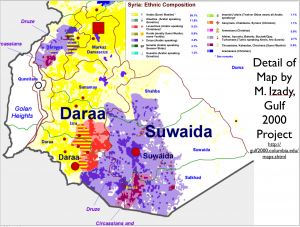 A close inspection of the map shows that much of western and northern Syria are characterized by staggering ethnic complexity. That Izady has been able to accurately depict such intricacy is 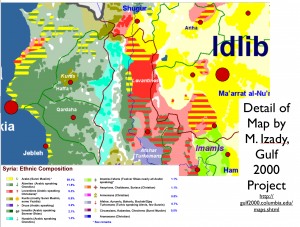 remarkable. Small but non-negligible groups that are almost always ignored, such as Syria’s Ismailis and Twelver Shias, are mapped with precision. Separate groups that are habitually conflated, such as the Alawites and the Nusairis, are distinguished and mapped accordingly.

At first glance, Izady’s separation of the Alawites and the Nusairis left me puzzled. I had been under the impression that “Nusairi” was merely a pejorative term used by Sunni Muslims to disparage the highly heterodox offshoot of Shia Islam that is more properly known as the Alawite sect, which also happens to be the faith of the ruling core of the Syrian government. But the Nusairi group proper is indeed distinct from the Alawites, although the faiths of both groups, as Izady indicates, are partly rooted in ancient Gnosticism. The limited amount of research that I was able to conduct did not allow me to determine what specific features differentiate these two groups. Unfortunately, most of the readily accessible internet sources come from hostile Sunni Islamist website that disparage both groups and tend to lump them together. Intriguingly, the Nusairis are shown in Izady’s map as inhabiting the higher reaches of the Coastal, or Nusayriyah, Mountains, whereas the Alawites proper are concentrated in lower-elevation areas. (The term “Nusayriyah Mountains,” derives, according to the Wikipedia, from “an antiquated label for the [Alawite] community that is now considered insulting,” again conflating the two groups. ) 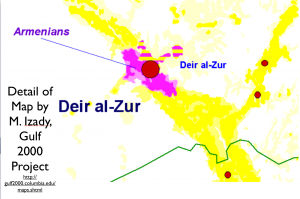 As Izady’s maps show, Armenian communities are scattered through several parts of Syria. One of the largest Armenian communities is found in the eastern Syrian city of Deir al-Zur (alternatively Deir ez-Zor, Deir Ezzor, Deir Al-Zor, Dayr Al-Zawr, Der Ezzor), a settlement of more than 200,000 inhabitants that is noted for its oil-refineries and other industries. Deir al-Zur is particularly important in Armenian history, as it was one of the main destinations of Armenians expelled by the Ottoman Empire during World War I, a deadly process regarded by most historians of the issue as genocidal in nature. Deir al-Zur is also located near the core power-base of the so-called Islamic State (or ISIS). As a result, the Armenian communities of the region are highly threatened. 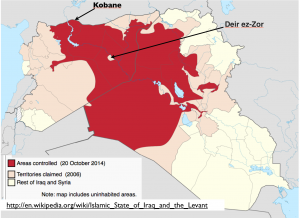 Over the past two months, I have been periodically trying to determine the situation of the Armenians of Syria and especially eastern Syria, but with little luck. Some sources indicate that half of the Armenian population has fled the country. Many maps that show the current military situation depict the key city of Deir al-Zur as an island of Syrian governmental control in an ISIS sea (such a pattern is even found on maps that maximize the ISIS zone, such as the Wikipedia map posted here, which inaccurately portrays Kobane was having fallen to Islamic State forces). Other sources indicate that intensive fighting has recently occurred in the vicinity, and that much or perhaps all of the city has been taken by Islamic State fighters, but information remains thin. The most recent information that I have found dates from October 21 and comes from a Columbian newspaper. If my translation is correct, the paper reports that, “The group Islamic State today took part of the industrial area of ​​the city of Deir al-Zur in eastern Syria, after facing the forces of Bashar al-Assad regime, according to the Syrian Observatory for Human Rights.” The sardonic humorist Ambrose Bierce once quipped that “War is God’s way of teaching Americans geography.” But if so, help by the media is still needed in this educational initiative, and I am not convinced that they are doing an adequate job.

The city of Deir al-Zur did gain brief attention in late September after ISIS militants destroyed a prominent Armenian Church as well as an Armenian Memorial to the ethnic expulsions of the early twentieth century, prompting widespread international condemnation. Armenian sources, however, expressed disappointment that the official response from the United States “failed to either mention the very reason for this holy site’s existence, the Armenian Genocide…”

Gathering information on Deir al-Zur is complicated by the fact that its name also denotes the Syrian governorate (province) in which the city is located. Most news searches for Deir al-Zur (regardless of which spelling is used) thus return information that pertains to the larger province, not the city per se. One of the more unusual and intriguing recent articles on the province examines, “rules for journalists” that have been put forward by ISIS in the regions that it controls. As can be seen from this excerpt of an official ISIS proclamation, the groups does not hold the Qatari media giant Al Jazeera in high regard:

3 – Journalists can work directly with international news agencies (such as Reuters, AFP and AP), but they are to avoid all international and local satellite TV channels. They are forbidden to provide any exclusive material or have any contact (sound or image) with them in any capacity.

4 – Journalists are forbidden to work in any way with the TV channels placed on the blacklist of channels that fight against Islamic countries (such as Al-Arabiya, Al Jazeera and Orient). Violators will be held accountable.