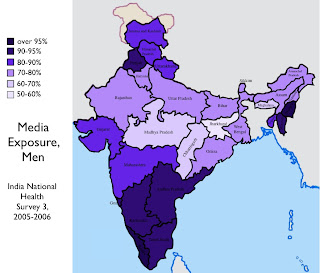 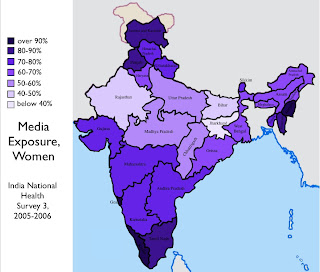 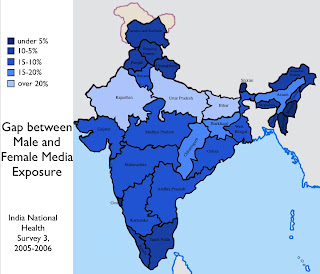 One of the more unusual measurements of social development collected in the Indian National Family Health Survey and posted on the Wikipedia is that of “media awareness,” defined as the percentage of people in a given state “exposed to the media.” The data were collected separately for men and women, and providing a measure not just of exposure to the wider world but also of gender disparities.

The first map, showing male media exposure, fits India’s general developmental pattern relatively well. Southern India ranks high, especially the four states of the far south that speak Dravidian rather than Indo-European languages. The far northeast shows its typical variability. The high rates found in Mizoram correlate with that state’s elevated levels of literacy, attributable to the efforts of Protestant missionaries (roughly 75 percent of the state’s residents are Presbyterian). Manipur’s ranking, second highest in the country, is more difficult to explain. The map also shows some unusual features. In the progressive far north, Haryana comes in with an unexpectedly low figure. In the languishing north-central belt, the normal pattern is reversed, with Bihar and Uttar Pradesh outranking the states immediately to their south. The extremely low figures for Jharkhand, however, are not surprising. Jharkhand’s substantial mineral wealth inflates many of its developmental figures. But the state as a whole remains deeply impoverished, and its large tribal population (28 percent) includes many who live far beyond the reach of information technology.

The media exposure map for women is similar to that for men, although the disparity between “high” states and “low” states is more pronounced (note the adjusted numerical cut-off points in this map’s key). The overall impression is one of a reversed center-periphery dynamic, with high levels of television and radio exposure found in India’s extreme south, north, and east (Kerala, Jammu and Kashmir, and Manipur) and low levels in the central areas. Jharkhand’s and Bihar’s female media exposure rates in particular are shockingly low (at 39 and 41 percent respectively).

The final map highlights the gender discrepancies revealed by the first two maps. Three central-northern states stand out; here as with other indicators, Bihar, Uttar Pradesh, and Rajasthan show low levels of female empowerment, part of why they fare so poorly in terms of general social development.

To be sure, increased media exposure is not a purely positive development. Environmentalists decry it as a spur to consumerism, while advocates of cultural diversity warn of increasing uniformity. Not surprisingly, the spread of radio, television, and video has been linked to the “flagging fortunes of traditional and folk media, [including] street theater.”

Meanwhile, as usual, globalization provides its own “difference engine.” The media streaming into rural villages is not necessarily of Indian origin. In the far northeast, residents of Manipur and especially Nagaland are apparently tuning in to South Korean frequencies. Journalist Renchano Humtsoe is worth quoting on this issue at some length:

“Korean culture is flooding into Nagaland. New trade treaties between India and Korea facilitated the exchange of Korean goods and enabled them to enter Nagaland with greater ease. Additionally, Nagas have long felt neglected by the central Indian government. This is especially the case with Naga youth. Many believe this lack of identity with central India informs Nagas’ embrace of Korean culture. […] Naga youth have now started to adapt Korean culture. Korean television channels, programs, movies, and clothes are popular among Naga youth. Korean companies are looking into investing in Nagaland. The Nagaland State Government has even taken steps to embrace Korean culture: it hosts an annual Indian-Korean cultural festival.”