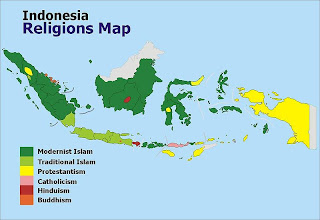 As mentioned in Monday’s post, maps of the global distribution of Islam often portray Indonesia and Malaysia as solidly Muslim countries. The close-up segment of the popular map “World Muslim Distribution (Sunni and Shia) 1995” posted above, for example, colors Malaysia and Indonesia* a uniform shade of light green, indicating the prevalence of Sunni Islam. But while Indonesia does have more Muslims than any other country, it is by no means religiously homogenous. Some twelve to fourteen percent of Indonesia’s people follow other religions, and they dominate sizable areas of the country. In Malaysia, only about 60 percent of the population follows Islam. Sarawak, Malaysia’s largest state by area, has a Christian majority.

The Wikipedia map of religion in Indonesia does a much better job of showing the distribution of religious groups in that country. Note the accurate depiction of Hinduism in Bali and of Christianity in part of northern Sumatra, in northern Sulawesi, and through much of the southeast. A number of primarily non-Muslim areas are overlooked, such as the largely Christian island of Nias, but such objections amount to quibbles. More problematic is the mapping of mixed areas as fully in one religious camp or another. Through much of the Maluku Islands and central Sulawesi, Christianity and Islam are followed in roughly equal numbers, generating considerable tension. (Religious strife in these areas peaked roughly a decade ago, but by no means has disappeared altogether.) Equally misleading is the depiction of a solidly Hindu area in southern Borneo (Kalimantan) and of a Buddhist zone off the northeastern coast of Sumatra.

One of Indonesia’s major religious traditions is erased from the map altogether, that of animism, or the practice of worshipping ancestors and nature spirits. In actuality, animism prevails across much of central Borneo and throughout the Indonesian portion of the island of New Guinea, although in both areas Muslim and Christian populations are rapidly expanding through migration and conversion. Animism generally goes missing from discussion of religion in Indonesia because it is technically illegal, leading to the classification of its adherents into other faiths. Although the Indonesian constitution supposedly guarantees freedom of religion, such liberty only applies to the officially recognized faiths: Islam, Christianity (Catholic and Protestant), Buddhism, Hinduism, and Confucianism.

The most intriguing and potentially confusing feature of the map is its differentiation of “traditional” from “modernist” Islam. When I show this map to my students and ask them to explain the distinction, they almost always assume that “Traditional Islam” refers to a fundamentalist form of the faith that demands a return to practices followed during the time of the prophet, and that “Modernist Islam” refers to a more liberal faith that makes allowances for changing social and economic conditions. In actuality, the distinction is entirely different, with “Traditional Islam” meaning the Javanese custom of melding Islam with earlier Hindu and animist ideas and practices, and “Modernist Islam” denoting orthodox expressions of the faith.

Following the work of the noted anthropologist Clifford Geertz, the older heterodox strain is often referred to as Abangan Islam, and the orthodox strain as Santri Islam. Abanagan is closely associated with the Javanese-speaking regions of central and eastern Java, where the great Hindu epics, the Ramayana and the Mahabharata, retain cultural significance. Emblematic of Javanese culture are the all-night shadow-puppet (wayang kulit) performances of these two epics. The map’s depiction of non-Javanese-speaking western Java and southern Sumatra within this realm of “Traditional Islam” is unusual, as in these areas more mainstream forms of the religion have long prevailed.

In central and eastern Java, Indonesia’s demographic core, syncretic Abanagan Islam has been the dominant faith for the past half millennium. But orthodox Islam is spreading rapidly, especially in the cities and among the young. As is true in Pakistan, religious hardliners often attack those engaged in suspect religious practices, although in Indonesia such assaults are usually not deadly. On October 9, 2010, for example, one group of self-deputized religious enforcers shut down a shadow-puppet performance. As reported in Asia Sentinel:

Last Saturday night, a band of fundamentalist Islamic thugs showed up in the Indonesian town of Sukoharjo in Central Java and broke up a performance of wayang, the iconic Javanese shadow puppetry that is a symbol of Indonesian culture.Throwing rocks and waving machetes, the youths, calling themselves Laskar Jihad – holy warriors – forced the audience out of the performance. Two people were beaten, witnesses said.

* Note that far eastern Indonesia is not depicted on the map.