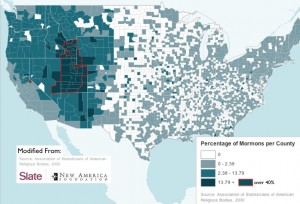 Slate Magazine recently published an excellent interactive map of “Mormons in America,” which shows “where the country’s largest homegrown religion thrives—and where it doesn’t.” By moving one’s cursor over the map on the Slate site, one can see how many members of the Church of Jesus Christ of Latter Day Saints reside in almost every U.S. county. My one criticism of the map is that its highest category is only 13.8 percent. In most counties in Utah and southeastern Idaho, the percentage of Mormons is much higher. As a result, I have outlined all of the counties in which church membership exceeds 40 percent of the population. In most of these counties, the figure is significantly higher still. 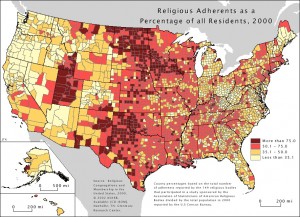 In the “religious adherents” map posted here, the Mormon belt stands out for its high overall level of religiosity. This map is surprising to many, as it shows relatively low levels of religious adherence in parts of the southeast, the so-called Bible Belt. Religiosity is shown as particularly low in the coal-mining counties of West Virginia and eastern Kentucky, one of the poorest parts of the country. The northwest, urban and rural counties alike, is also low in this regard. Northern and southern California are also differentiated. Note as well the high level of religious adherence in the Lutheran zone of the north-central region of the U.S.