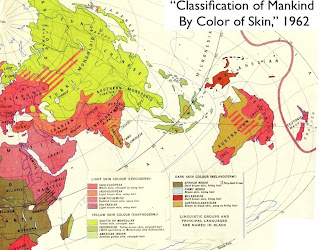 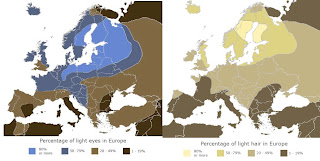 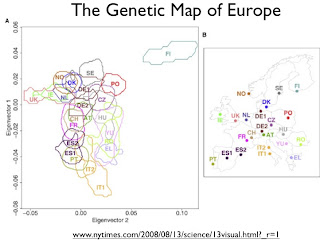 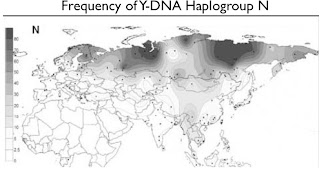 In skimming through old atlases, one might be surprised to find Finns racially classified as yellow-skinned Mongolians. Yet until fairly recently, that was the norm. Consider the 1962 map posted above, “Classification of Mankind By Color of Skin,” from the popular Bartholomew’s Advanced Atlas of Modern Geography. Here both Finns and Estonians are “xanthodermic Asiatics.” “(Xanthoderma,” medical dictionaries tell us, refers to “skin that has a yellow coloration, as in jaundice.”) Bizarre as it may be, the idea that Finns are racially linked to East Asians lives on; if in doubt, try an internet search of “Finns Mongols.”

The notion that Finns and other Finno-Ugric-speaking peoples of Europe are of Mongolian stock is hard to take seriously. While biological race is itself a questionable concept, a number of physical traits distinguish East Asians (the “Mongolians” of racial classification): epicanthic eyelid folds; dark, straight, thick hair; and a number of bone and teeth features. (Note that yellow skin is nowhere on this list.) These attributes are as rare in Finland as they are in other European countries. If anything, Finns may be the blondest, most blue-eyed people in the world, as the second set of maps shows. The Eastern Finnic peoples are not quite as light as the western ones, falling closer to the European norm. Red hair, however, is oddly common among the Urdmuts of the central Volga. Udmurtia is proud of this characteristic, running an annual “red festival” that celebrates rufous coloring not only in people but also in “cats, dogs, hamsters, [and] squirrels…”

Why then have the Finno-Ugric peoples, Hungarians as well as Finns and Estonians, so often been classified as “Mongolian”? The credit – or discredit – goes to a German scholar named Johann Friedrich Blumenbach (1752 -1840). Known as the “father of physical anthropology,” Blumenbach is famed for coining the term “Caucasian race.” Blumenbach thought that cranium shape was the key to human differentiation, but his collection of skulls was limited. He purportedly based his claims on the fact that “two Saami (Lapp) skulls and one Finnish skull resembled one Mongol skull.” Evidently, he never examined any livings Finns. Blumenbach’s scientific stature was so elevated that his ideas carried the day, nonsensical though they were.

Linguistic analysis seemed to bolster the idea that Finno-Ugric peoples belonged in the “Mongolian” category. Scholars once widely assumed that peoples who spoke related languages belonged to the same race, sharing descent from a common ancestral population. From the mid-1800s to the mid-1900s, most linguists grouped “Uralic” Finno-Ugric languages with Altaic languages, forming a Ural-Altaic macro-family that linked Finnish to Mongolian and Manchu. If their languages were related, the reasoning went, the Finns and Mongols had to be sibling peoples. This Ural-Altaic hypothesis has long since been abandoned, but the Uralic component is still widely accepted, and it still links Finns to peoples who look Asian. Uralic’s highest order split separates Finno-Ugric from Samoyedic, and the Samoyeds – Nenets, Selkups, and others – have dark eyes, straight black hair, and epicanthic eyelid folds. The eastern Ugric-speakers of western Siberia, the Khanty and the Mansi, appear Eurasian, with intermediate features and mixed genetic markers as well.

But we now know that linguistic groups and genetic groups need not have any connection. Languages can spread into new populations even when genes do not, just as migration can bring wholesale genetic changes without linguistic transformations. As a result, large language families often encompass peoples who look very different and have markedly distinct genetic heritages. The Afroasiatic macro-family, for example, encompasses blonde Berbers in North Africa and dark-skinned Hausa in northern Nigeria, and even the Berber family includes the generally dark-skinned Tuareg as well as the generally light-skinned Kabyle. The fact that some Uralic speakers look European while others look East Asian thus tells us nothing about the racial attributes of the Finns—nor of the original speakers of Uralic languages.

As it turns out, the Finns are genetically distinctive, forming an “outlier” European population, as the New York Times “Genetic Map” posted above indicates. Why this should be the case is a matter of some controversy. Some attribute it to a “founder effect,” arising from the fact that the “Finnish population was at one time very small and then expanded, bearing the atypical genetics of its few founders.” Others think that the Finns are simply “more European” than others, having absorbed fewer genes from outsiders. According to this line of reasoning, the Finns most closely resemble the Paleolithic European Cro-Magnons.

Several specific genetic markers also help differentiate the Finnish population. As Asya Pereltsvaig noted in the Geocurrents comments section on Monday, the Y-chromosome DNA haplogroup N is extremely common in Finland, found in 60 percent of the country’s male population, yet is rare in most of the rest of Europe. As Y-DNA passes only in the paternal lineage, a majority of Finnish men must be descended from a single man with a particular mutation on his Y-chromosome who probably lived some 12-14,000 years ago. As it happens, haplogroup N has a close association with peoples speaking Uralic languages. It is thought to have originated in Central Asia, and then spread in a counter-clockwise route through central Siberia and into northern Europe. Haplogroup N is also prevalent in a few areas outside of the Uralic-speaking zone, reaching especially high concentrations (75 percent) among the Turkic-speaking Sakha (Yakut) of central-northern Siberia. But even if most Finns and Sakhas can trace their male lineages back to a single great-great-great…grandfather, that does not mean that they are otherwise genetically similar; when one goes back 12,000 years, the number of one’s ancestors becomes staggeringly large.

Genetic studies also shed light on the history of interactions among Slavic and Finno-Ugric peoples in northern European Russia. According to a 2005 paper by Boris Malyarchuk and others, published in Human Biology 76(6), “… only the most western Russian populations appear to be descendants of the Slavs, whereas northern and eastern Russian populations appear to be the result of an admixture between Slavic tribes and pre-Slavonic populations” (p. 897). For further explorations of the linguistic, genetic, and gender history of this region, see the recent postings on Languages of the World.