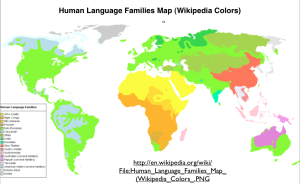 For teaching a class on the history and geography of the world’s major language families, good linguistic maps are essential. Unfortunately, serviceable maps that depict only language families are difficult to find. Most images available online show a combination of families and sub-families, splitting Indo-European, for example, into its main divisions. Such a portrayal is of little use for demonstrating the significance of the Indo-European family, which encompasses languages spoken by almost half the people of the world.

The best map of language families per se that I have found is a Wikipedia product, found here and posted above. I do have a few quibbles with the map. It portrays “Caucasian,” for example, as a single family, whereas in actuality at least three languages families are found in the Caucasus Mountains and nowhere else. Like most other family-level linguistic maps, it exaggerates the extent of indigenous languages in places such as Canada, Brazil, and Siberia, where English, Portuguese, and Russian respectively are spreading rapidly as many native tongues slowly fade away. Such mapping, however, captures the situation that existed until fairly recently, and therefore has much to recommend it.

But as good as it may be, this map is of limited utility in the classroom. When I lecture on a specific language family, I want it to stand out on the map, rather than hide among a dozen other pastel-colored groupings. I have therefore used this map as a model for creating a series of family-specific depictions. A few of these are posted here, and the others will appear over the next week. I have simplified the mapping to some extent, partly because the simple program that I use (Keynote, Apple’s equivalent of PowerPoint) does not allow fine distinctions. I have generally followed the contours on the Wikipedia prototype closely, even where I know (or suspect) that the depiction is not quite right. I have done so merely for the sake of convenience. After all of the individual maps have been posted, I hope to put up the original Keynote file, which I will also translate onto PowerPoint. This will allow interested users to manipulate the maps as they see fit, moving the borders between language families, for example, or changing the color scheme. 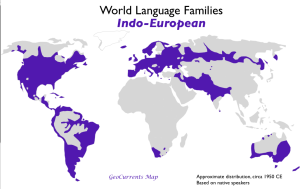 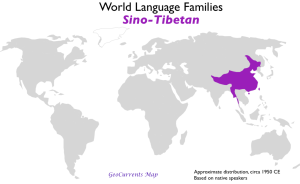 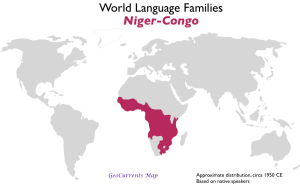 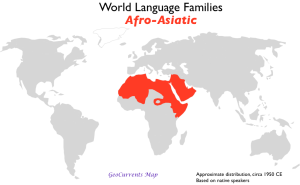 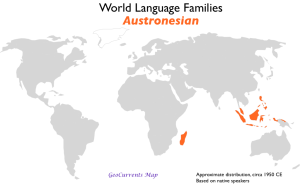