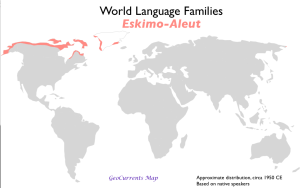 Today’s post concludes the brief series on world maps of language families, based on abstracting information from a Wikipedia language-family map to make convenient classroom maps. The only remaining category on the map that is a legitimate language family, however, is Eskimo-Aleut. The others are actually geographical groupings of several different families.

With only around 100,000 people speaking its languages, Eskimo-Aleut cannot be regarded as a major family on demographic grounds. It does, however, cover a vast expanse of sparsely settled land, and it is highly significant for Arctic historical studies. I have modified the depiction in the Wikipedia original by adding a small dot for Siberian Yupik, as well as shading areas in which East Greenlandic and “Polar Eskimo” are spoken. I neglected other minor geographical outliers, such as Pacific Gulf Yupik, spoken in south-central Alaska. 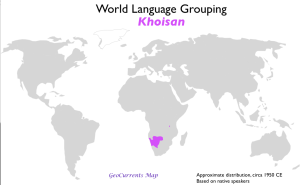 The next map indicates the so-called Khoisan languages of southern Africa. I have again modified the depiction in the Wikipedia original, in this case by adding the geographical outlier of Sandawe, spoken by some 40,000 people in central Tanzania. Although all Khoisan languages share certain features, mostly notably “click” consonants, current linguistic thinking regards the group as an amalgamation of four or five separate families. Many languages in the group are extinct or moribund. 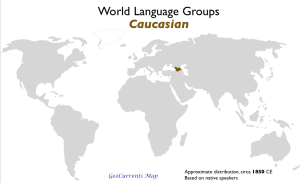 The “Caucasian” category on the Wikipedia map is also a geographical grouping, as at least three separate language families are found here: Kartvelian, Northwest Caucasian, and Northeast Caucasian. The map exaggerates the extent of these families, especially Northwestern Caucasian. Here the depiction refers to the situation in the mid-1800s, before the expulsion of the Circassians from the Russian Empire. (A more detailed map of the languages in the Caucasus, created by GeoCurrents, can be viewed here.) 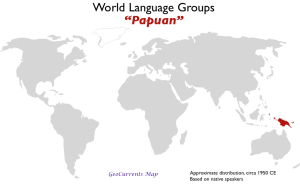 Papuan is also a non-family, as noted in the key of the Wikipedia original map. It encompasses as many as 40 separate families, the largest of which is Trans-New-Guinea. Mapping even the composite “Papuan” category is quite a challenge at this scale, as many coastal areas of New Guinea and nearby islands are occupied by peoples speaking Austronesian languages. I have slightly modified the Wikipedia original by putting the island of Halmahera in the Papuan category, and by adding another Papuan zone in western New Guinea. The extent of “Papuan” on New Guinea is still understated, however, while its extent on New Britain is overstated. 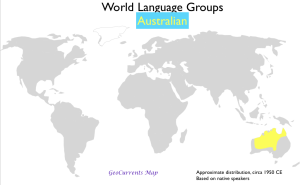 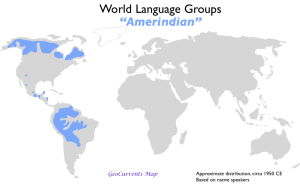 The Wikipedia key also notes that “Australian” and “American Indian” are composite categories, composed of “several families.” I have followed the original Wikipedia map closely in both cases, although I would note that the mapping here is far from accurate or precise. 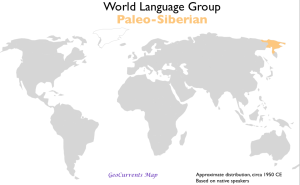 The original Wikipedia original map depicts northeastern Siberia as an area characterized by one (or more) linguistic isolates. The various languages of this area are often labeled “Paleo-Siberian,” which is another geographical rather than specifically linguistic category. Most of the indigenous languages here fall into the Chukotko-Kamchatkan family. 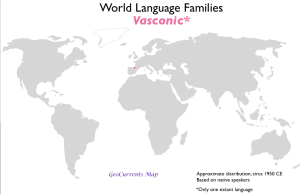 Finally, I could not resist including a map of the exiguous Vasconic family, long limited to Basque.