Misleading Language Maps on the Internet

Although the internet allows easy access to manifold cartographic treasures, it provides even more rapid access to misleading, poorly constructed, and laughably inaccurate maps. Consider, for example, language maps at the global scale. A simple Google image search of “world language map” yields over 600 million results, although only the top hits, and by no means all of them, actually show linguistic maps of the world. Those that do can in general be divided into two categories: maps that depict language families, and maps focused on the most widely spoken individual languages. Today’s post considers the latter category, analyzing Google’s eight most highly ranked “world language maps” that portray the distribution of specific languages.

All of these maps are actually best described as “political linguistic maps,” as they organize their depiction of language distribution in accordance with the territories of internationally recognized states. As a result, multilingual states—which constitute the majority of the world’s countries—tend to be mapped as monolingual. Canada is divided into English- and French-speaking zones in roughly half of these maps, but few other countries are treated in such a manner. In almost all cases, official languages are highlighted regardless of whether they are actually spoken by the majority of the population; as a result, Mali appears to be as much a French-speaking country as France. The criteria for language selection generally go unmentioned and in most cases seem inconsistent, but it does appear in general that the “number of native speakers” outweighs the “total number of speakers.”  As a result, one of the world’s most widely spoken and politically significant languages, Indonesian/Malaysian (“Malay”), is usually ignored, often in favor of much less widely used European languages.

Such problems, however, are difficult to avoid. Multilingualism alone—both on the individual and on communal level—makes language mapping a frustrating exercise. But in all of the maps analyzed, the flaws run much deeper. Most are riddled with errors, many at a quite elementary level. As a result, the use of such readily accessible maps risks undermining knowledge of the world by delivering misinformation. To substantiate such harsh allegations, the remainder of the post will examine in some detail each of top eight world language maps that depict individual languages. 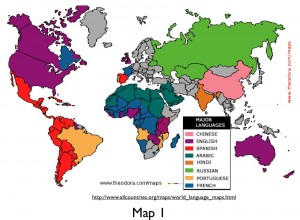 The first map has relatively few obvious blunders, although portraying Namibia, Lesotho, and Swaziland as French-speaking is a howler. Mapping Djibouti as an Arabic-speaking country is also problematic; although Arabic has official status—as does French—relatively few Djiboutians speak it, as Somali and Afar are the main vehicles of communication. Map 1 does divide a few countries into separate languages, and does so with a degree of accuracy. Not only is Canada split at the provincial level into Anglophone and Francophone areas, but so too is Cameroon, while Chad is divided into Arabic- and French-speaking zones. Nowhere else, however, do language boundaries deviate from those of states. Only Kenya and Tanzania are portrayed (through diagonal stippling) as containing multiple languages in the same locations, but the effort is flubbed ; presumably the intention was to show English intermixed with Swahili, but Swahili does not appear in the key. As is true of almost all maps of this kind, official languages of European origin in sub-Saharan Africa are exaggerated; curiously, however, Botswana, Malawi, and South Africa—where English has official status and is widely used—are not included in the English-speaking set. The portrayal of India as uniformly Hindi-speaking is also problematic, as is the mapping of China as completely Chinese-speaking—especially considering the fact that  “Chinese” is not exactly a spoken language, but rather a group of related languages that are, with the exception of Mandarin, locally conceptualized as mere dialects. 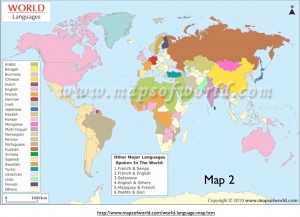 Map 2 is a far more comprehensive effort, depicting 23 separate languages. Most are limited to a single country, sometimes incorrectly so (Austria, for example, is not depicted as German-speaking). Outrageous errors here include the depiction of Sakhalin as Japanese speaking, Mali, Cyprus, and Azerbaijan as Arabic speaking, and Belgium as speaking some uncertain language (the color used for Belgium does not appear in the key). The criteria for inclusion in this map seem particularly odd; why, for example, are relatively major languages such as Vietnamese, Bahasa Indonesia, Italian, and Polish, ignored while Finnish and Norwegian are mapped? India is depicted accurately here as “multilingual,” but it is the only country so classified!  The text-box labeled “other major languages spoken in the world” is confusing; how can “French and English” be classified here as “other languages” when both are extensively mapped? In actuality, it appears that the numbers in the box were designed to have been placed on specific countries: “1: French and Sango,” for example, pertains to Central African Republic. Unfortunately, that step was neglected. 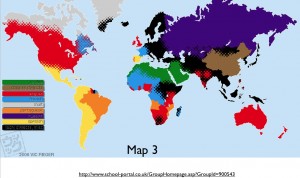 Map 3 at least attempts to show areas of language overlap and multilingualism, although it does so in a crude manner. Note, for example, the extension of the North American French-speaking zone well out of Quebec into Newfoundland, Nova Scotia, and Maine. The map’s reduction of the vast majority of languages in the key to “local dialects, misc.” is risible. One also finds the Inuit language (actually, “languages”), spoken by fewer than 100,000 people, depicted as more significant than languages spoken by more than 100 million, such as Hindi, Bengali, and Indonesian. Yet the map simultaneously puts one of the main Inuit-speaking areas, the coastal strip of southern Greenland, in the “local dialects and miscellaneous” category. 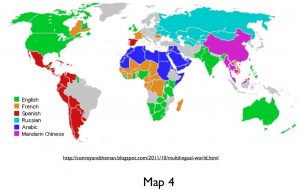 Map 4—probably the worst of the lot—strictly depicts all sovereign states as linguistically uniform—except Canada. Switzerland and Belgium are simply mapped as French speaking—as, absurdly, are Romania, Vietnam, and even Albania. Equally egregious is the depiction of Thailand, Laos, Burma, Cambodia, and Malaysia as Mandarin speaking.  The portrayal of the entire former Soviet Union as Russian speaking is also misleading, as is the mapping of Somalia and Eritrea as Arabic speaking (although Arabic is a co-official language of both countries). Note that Israel is also mapped as Arabic speaking. The Portuguese language is oddly ignored, and Portuguese-using Guinea Bissau has been colored as a Francophone state. Francophone Burundi and Rwanda* have in contrast been depicted Anglophone, whereas Anglophone Malawi and Swaziland have been excluded from the same category. 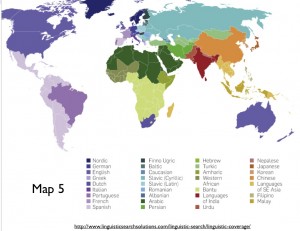 On first glance, Map 5 appears to be comprehensive and sophisticated than the others—but it is not.  This map violates basic protocols by placing individual languages and language families at the same level of analysis. Here, for example, one finds “German” rather than “Germanic” but at the same time “Turkic” rather than “Turkish.” Yet the Turkic language family is severely misconstrued, as Turkic-speaking Azerbaijan is placed in the non-existent “Caucasian” language family, whereas non-Turkic-speaking Mongolia is included. Dividing the Slavic family on the basis of script rather than linguistic relationship is inexcusable,** as is the use of imaginary language categories, such as “West African.” The depiction of Ethiopia as entirely Amharic speaking is problematic enough, but the placing of Somalia in the same category is indefensible. Belize, Haiti, Guyana, Suriname, and French Guiana are all incorrectly mapped as Spanish speaking. For India, Bangladesh, Bhutan, and Sri Lanka—as well as Mainland Southeast Asia—cop-out categories of geographical rather than linguistic reference are employed. Bizarrely, the “languages of [Mainland] SE Asia” class is extended to Madagascar and Melanesia. And in Europe, while the relatively minor language of Albanian is mapped, Albanian-speaking Kosovo is incorrectly depicted as Slavic speaking. 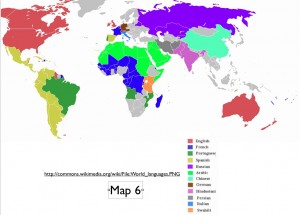 One might think that the Wikipedia map (#6) of world languages would be reasonably accurate—but one would again be mistaken. Although it is difficult to see, the map severely misconstrues the Caribbean, where neither Guadeloupe not Martinique are depicted as French speaking, but Dominica—where the official language is English—is. (In the Pacific, Fiji and Samoa are also mapped as French speaking.) Dutch- and Papiamento-speaking Curaçao and Aruba, however, are portrayed as English speaking. All of Timor is depicted as Portuguese speaking, even the Indonesian half of the island.  For both India and Pakistan, the archaic term “Hindustani” is employed, which is depicted as uniformly extending across India. Kyrgyzstan is shown as Russian speaking; although Russian is an official language, it is by no means the country’s major tongue. As with many other maps of this type, the extent of Arabic is exaggerated by including Eritrea, Somalia and South Sudan. By the same token, the extent of French in Africa is overplayed, yet that of English in the same region is ignored altogether. And while Swahili is indeed an official language of Uganda, the country can hardly be regarded as Swahili speaking; English also has official status, and is more widely used. The mapping of Afghanistan as Persian speaking is justifiable, but the exclusion of Tajikistan from the same category is not. One might also ask why Italian merits depiction, but not Japanese, Turkish, Korean, Vietnamese, and Indonesian/Malaysian. 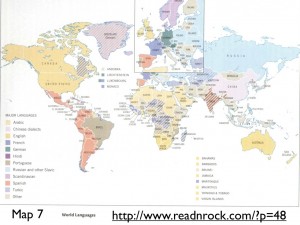 Map 7 does a better job than the others in depicting multilingualism. Yet it oddly depicts Guinea, Gabon, and Senegal as entirely French speaking, unlike the other Francophone countries of sub-Saharan Africa; compare also the divergent mapping of Mozambique and Angola in Lusophone (Portuguese speaking) Africa, and note the depiction of southern Africa as entirely English speaking. This map also mixes individual languages with language families (Turkic and Slavic), yet it manages to misconstrue its own categories.  Note that Azerbaijan is incorrectly mapped as non-Turkic, just as Bosnia and Macedonia are incorrectly mapped as non-Slavic. Finnic-speaking Estonia, however, is put in the Slavic category. 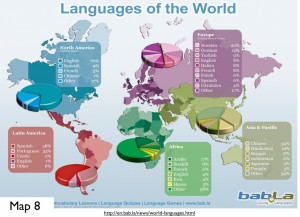 Map 8 is the odd one out in this series, as it does not actually map languages, but rather merely provides information on the percentage of people who speak certain languages over five continent-like divisions of the world. I cannot imagine how this information could be useful to anyone in any circumstance. Note also that it also makes errors in categorization, as it lists individual languages along with a language family of uncertain coherence (“Kwa”) and a certain type of language (“Creole”).

It is of course one thing to harshly criticize such maps and another to produce something better. Stay tuned for a GeoCurrents map of the world’s main languages later this summer.

*Rwanda is admittedly tending in an Anglophone direction—much to the consternation of France—but French is still more important than English.

**This distinction is also incorrectly applied, as Montenegro actually favors the Latin rather than the Cyrillic alphabet.