A crucial if often overlooked issue in world historical geography is whether seas and other waterways serve to separate or to unite human communities found on opposing shores. The answer, of course, is “it depends”: it depends on the distances entailed, the physical characteristics of the seas (and lands) in question, the maritime technology and orientation of the people involved, and so on. In some circumstances, even relatively narrow waters can form profound barriers, whereas in others seas provide easy linkages to distant lands. 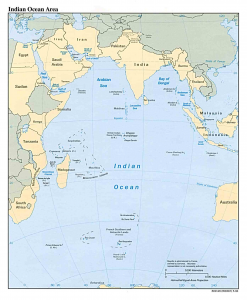 Perhaps the best example of waterways forming barriers comes from the western Indian Ocean. Madagascar and especially the Comoros are not particularly far from eastern Africa, the probable homeland of humankind, yet they were not peopled until the Common Era (the time period staring at the year zero)—and when Madagascar was settled it was initially by way Southeast Asia, not Africa. The fertile and sizable Mascarene Islands (Mauritius, Réunion, and Rodrigues), were not discovered until much later and were not inhabited until the modern era. 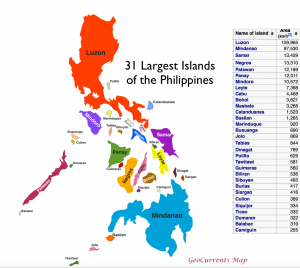 The best example of seas connecting opposing shores is probably the Philippines, a quintessentially archipelagic country composed of more than 7,000 islands. The Austronesian migrants who came from Taiwan to the Philippines some 4,000 years ago were superb sailors with a well-developed maritime technology, and in the archipelago they found rich and inviting 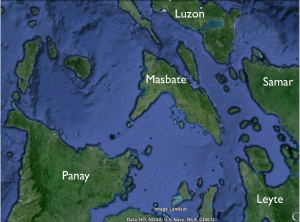 seas sprinkled with a profusion of islands. In this environment, waterways tended to link peoples found on the opposing shores, whereas the mountainous interiors of the larger islands tended to form barriers. It is not coincidental that the smallest administrative division of the Philippines is the “barangay,” a term that originally meant “village” but is actually derived from “balangay,” an indigenous watercraft. 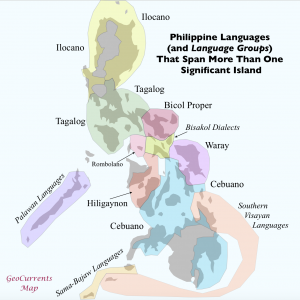 The fact that seas have historically connected, whereas uplands have tended to divide, the human communities of the Philippines is best illustrated by a language map of the country. One can see such patterns on any such map of the country, but one does have to look closely to perceive them. To clarify the situation, I have made a new linguistic map of the archipelago that highlights such maritime connections. This map is based on several sources, relying heavily on language maps published in Wikipedia and Ethnologue. Note that I have mapped both individual languages and minor language families and dialect clusters, doing so in order to highlight maritime linkages. I have, however, left out some minor languages that have clear maritime geographies, such as Asi. 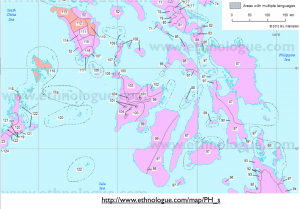 As the title of my map specifies, only those Philippine languages that span more than one significant island are considered. As a result, important languages such as Kapampangan and Pangasinan are excluded, as they are essentially confined to one island. But as can be seen, most of the major islands of the country are divided among two or more languages. Even some relatively small islands, such as Tablas, Burias, and Biliran, are linguistically split. In the central Philippines in particular, the central points of distribution for most languages are found at sea, not on land. 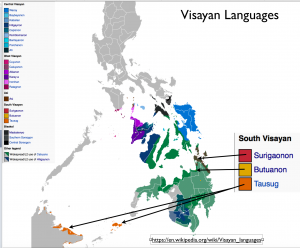 The sea-based distribution of Philippine languages map was probably even more pronounced in earlier historical periods. Three Philippine languages expanded greatly over the course of the 20th century: Tagalog, Cebuano, and Ilocano. Before that time, for example, Cebuano was not spoken in southeastern Mindanao, as it was largely confined to lands bordering the Bohol and Camotes seas. The oddly discontinuous distribution of the Southern Visayan languages, shown on my map as wrapping to the south of Mindanao, stems in part from the modern southward expansion of Cebuano. Before the Spanish conquest, languages in this group may have extended across much of northern Mindanao. The reduction of the geographical extent of the Southern Visayan languages may have been related to the eclipse of what had been the important city and state of Butuan in northern Mindanao, a decline that was itself closely linked to the Spanish imperial project. The Butuanon language survives to the present, although just barely. But at one time, Butuan was a very significant place indeed. As described in the Wikipedia: 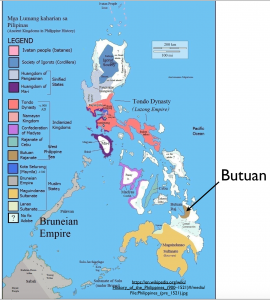 Butuan, before its colonization, was known as the Rajahnate of Butuan, an Indianized kingdom known for its metallurgic industry and sophisticated naval technology. The rajahnate flourished at the 10th and 11th centuries CE, and had an extensive trade network with the Champa Civilization and the Srivijayan Empire.

On 1001 CE, the rajahnate had established contact with the Song Dynasty of China. The annual Song Shih recorded the appearance of a Butuan mission at the Chinese imperial court, and the rajahnate was described as a small Hindu country with a Buddhist monarchy, which had a regular trade connection with Champa. The mission, under a rajah named Kiling, asked for equal status in court protocol with the Champa envoy, but ultimately was denied by the imperial court. However, under the reign of Sri Bata Shaja, the diplomatic equality was eventually granted to the Kingdom, and as a result the diplomatic relations of the two nations reached its peak in the Yuan Dynasty.

Finally, it must also be noted that distinguishing the various languages and dialects of the Philippines is a difficult task, as a great deal of linguistic mixing has long occurred. Consider, for example, the situation in the Bantayan Islands, found to the northwest of Cebu. I have left this small archipelago blank on my language map, following the Ethnologue in classifying its tongue, Bantayanon, as a separate language. The Wikipedia description of Bantayanon is brief but intriguing:

The Bantayan dialect is mostly a mixture of Visayan languages: principally native Cebuano, Hiligaynon (Negros), Waray-Waray (Samar), Masbatenyo (Masbate) and Boholano (Bohol). However it has words it can call its own such as “kakyop, sara, buwas” (yesterday, today, tomorrow).

(Note that in my language map, Boholano is classified as a dialect of Cebuano.)

(UPDATE: Customizable maps of the Philippines are posted here.)