As the current series on the origin and expansion of the Indo-European languages nears its completion, only a few remaining issues need to be discussed. Today’s post examines once again the mapping by Bouckaert et al. of the area likely occupied by the speakers of Proto-Indo-European (PIE). The focus here, however, is not on the location of this ancestral linguistic homeland, which they situate in southern Anatolia, but rather on the size of the area over which the language was supposedly spoken. The area so depicted on their maps, it turns out, is almost certainly much too large to be credible. By mapping a Neolithic language as covering almost one hundred thousand square kilometers, Bouckaert et al. demonstrate, yet again, a fundamental failure to understand the basic patterns of linguistic geography. 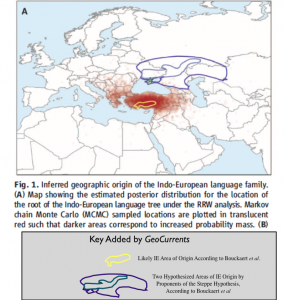 Bouckaert et al. give a surprisingly precise figure for the area that their model indicates as the probable homeland of proto-Indo-European: 92,000 km2, roughly equivalent to the extent of Hungary or of the American state of Indiana (see the yellow polygon in the map to the left). But given the characteristically opaque phrasing of the authors, it is not immediately clear if this zone is supposed to represent the actual (likely) spatial extent of the PIE-speaking community, or if it is merely supposed to show the broader area in which a much more spatially restricted language group was located. One can deduce, however, that that the former argument is being advanced based on the authors’ framing of the spatial hypotheses supposedly advanced by two different proponents of the steppe theory:

As can be seen in the map posted here, the area outlined by the “narrow Steppe hypothesis” fits precisely within the area demarcated by the “wider steppe hypothesis.” Such a depiction would not be logical if Bouckaert et al. were proposing that these “areas” were merely the proposed zones in which in a more spatially restricted language had been located, as opposed to the probable zone that such a language actually covered. If the latter meaning had been intended, the “narrow Steppe hypothesis” would merely be a more precise version of the “wider Steppe hypothesis” rather than a different “hypothesis” altogether. One can thus conclude that the authors intend the yellow polygon to indicate the area over which Proto-Indo-European had been spoken, as posited by their model with the given parameters of uncertainty. 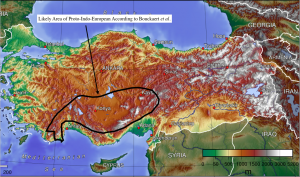 In the modern era, and to a significant extent across the past several thousand years, there is nothing unusual in a single language being spoken over a 92,000 square kilometer block of territory. But for such a situation to obtain, expansive spatial connectivity is necessary, which in turn depends on the power of the state or of some other form of social integration. In the world of Neolithic farmers, such regionally integrative institutions were almost certainly lacking, and as a result linguistic communities would have been much more spatially restricted. Such spatial limitations would have been even more pronounced in areas characterized by rough topography and formidable mountain ranges, as such barriers impede communication and thus enhance social and linguistic fragmentation. Yet as can be seen in the map posted here, Bouckaert et al. place the PIE homeland precisely in such a location. A single language spoken by tribal farmers over such a vast expanse of broken topography is all but impossible.

The situation in regard to the homeland identified by the steppe hypothesis would have been different. Under conditions of equestrian-oriented pastoral nomadism, linguistic communities could have occupied much larger territories than those found among agriculturalists living at the same time. The relatively flat topography of the steppe zone, moreover, would have allowed relatively easy communication among scattered groups. Sizable seasonal aggregations, often of a ceremonial nature, are also common under such circumstances, enhancing social solidarity over a broad expanse of land. But even given all of these considerations, the 421,000 km2 and the 1,760,000 km2 figures noted by Bouckaert et al. for the PIE homeland in two versions of the “steppe hypothesis” are still improbable. Geographically aware theorists thus tend to argue only that the original PIE homeland was situated in the western steppe zone, not over its full extent. 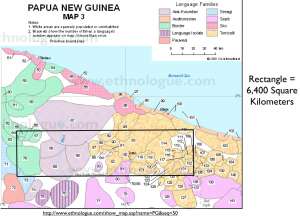 We cannot, of course, determine the areal extent of any prehistoric language, as the needed documentary evidence is lacking. It is tempting to associate specific languages with archeologically attested “cultures” that can be mapped, but it must be recalled that language often fails to correspond to groups defined on the basis of shared material culture; consider, for example, the “Pueblo Indians” and the Northwestern cultures of indigenous North America, both of which were highly multilingual, even at the language family level, yet substantially shared the same material cultures. Material culture, after all, is much more dependent on—and serves in part as an adaptation to—the physical environment, whereas languages seldom co-vary with physical geography; there is no way in which a certain word order pattern, or morphological type, or sound system would be more appropriate for any given landscape. All that we can do, therefore, is argue on the basis of contemporary analogues. Here we find that the areas covered by linguistic communities in those parts of the world that maintained “Neolithic” agricultural systems 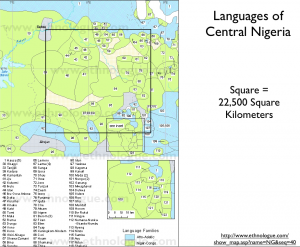 and forms of socio-political organization into modern times were of a restricted spatial scale. The archetypical location here is New Guinea, which is to this day characterized by pronounced linguistic fragmentation, as can be seen in the map posted here. One might object, however, on the basis that New Guinea is an extreme case and as such should not be used for comparative purposes. But in historically stateless areas elsewhere in the world, even where Neolithic technologies were superseded millennia ago, highly restricted linguistic territories remained the rule, as can be appreciated from the language map of central Nigeria posted here.* Maintaining a single language over an area as large as Hungary in such a context is highly unlikely, to say the least. 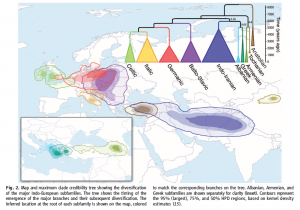 Similar objections apply to the mapping of the proto-languages of the major IE branches in Bouckaert et al. One must again consider the authors’ intentions in regard to their portrayal of these languages. It is not exactly clear, for example, what they mean by “the inferred location at the root of each subfamily is shown on the map” (see the map caption posted to the left). The “inferred location” of what? Presumably, they mean the inferred location “of the root,” and presumably “the root” refers to the proto-language that later generated each IE branch. It is still not clear, however, whether the colored areas are supposed to indicate the likely locations over which these proto-languages were spoken, or whether they merely show the probable zones in which much more spatially restricted languages were spoken. If the former scenario is indeed the case, the areas depicted are again much too large. 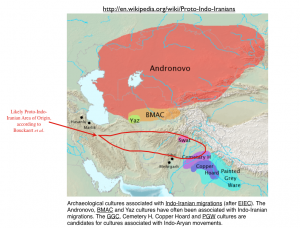 Of the “root languages” mapped on this figure, that of the Indo-Iranian languages is most preposterous. The previous post specified most of the problems associated with this inferred location. The map posted here also shows the extraordinary disconnection between the existing archeological evidence and the spatial hypothesis advanced by Bouckaert et al. I would further note that the area they advance for the origin of the Indo-Iranian languages makes no sense from the standpoint of physical geography. Its western apex is located in the middle of the uninhabitable Dasht-e Kavir (Great Salt Desert), its central portion is situated in the heights of the Hindu Kush, and its eastern extremity lies in the fertile plains of Punjab. It is unthinkable that any sedentary Neolithic population would have occupied such a territory at any given point in time.

*One could, however, argue that New Guinea and central Nigeria are highly linguistically diverse in part as a function of time. Both areas have been inhabited by modern humans for a very long period. Most of Eurasia has been populated by Homo sapiens sapiens for considerably time than West Africa, and to some extent even New Guinea (the presence of Neanderthals probably impeded the movement of modern humans into western Eurasia for millennia). As a result, one might expect somewhat greater linguistic differentiation in those places as compared to southern Anatolia. But it is also true that the Americas, which had been populated by modern humans for less time than western Eurasia, were also characterized by pronounced linguistic diversity. Significantly, agricultural areas in pre-Columbian North and South America that were not occupied by state-level societies were characterized by spatially restricted language groups.