Discrepancies in Mapping Persian/Farsi in Iran

GeoCurrents is deeply concerned with language mapping, as we find maps of language distribution to be highly useful and, if done properly, aesthetically appealing. But we also tend to be critical of linguistic cartography, as the spatial patterning of language is often too complex to be easily captured in maps. Dialect continua, zones of pervasive bilingualism, overlapping lingua francas, areas of linguistic interspersion, urban/rural language discrepancies, and mobile language communities all present major challenges for the mapmaker. Differences in population density is another tricky issue. Should one map a virtually unpopulated area in the same manner that one depicts a densely populated zone? And if one decides to leave uninhabited (or mostly uninhabited) areas unmarked, how large and how unpopulated do they have to be before they appear on the map?

As a result of these and other issues, linguistic maps, whether of a particular place, an individual language, or a language family, often vary greatly from one cartographer to another. Such differences were recently brought home as I examined various language maps of Iran, many of which are readily available on the internet. In particular, the area covered Farsi/Persian, the national language, differs significantly. I therefore decided to overlay these different depictions of Persian/Farsi on a uniform base-map of Iranian provinces so that they can be easily compared. Eleven such maps are posted here, both in their original form and with the Persian/Farsi zone extracted and placed on the common base map. The overlays are not particularly precise, owing largely to differences in map projection; a large amount of tedious handwork was necessary to make them accord as closely as they do with the originals. It is also important to note that the original maps themselves vary in regard to the area depicted. Some show merely Iran, but others include neighboring countries as well. The overlay maps, however, show only Iran. 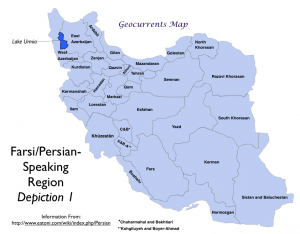 Depiction 1.  The first map is by far the simplest, as it shows Iran as uniformly Persian-speaking. Such a depiction is accurate in one sense, as Persian/Farsi is the national language, and hence is used for official purposes throughout Iran. It also serves as the lingua franca of those parts of the country in which it is not the dominant mother tongue. The source map for Depiction 1, however, is problematic, as it purports to show the overall distribution of Persian, yet it does so entirely on the basis of national boundaries. Depicting Afghanistan and especially Uzbekistan as uniformly P 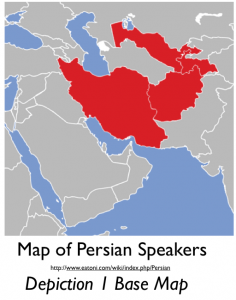 ersian-speaking is far from accurate.

Depiction 2. The source map for De 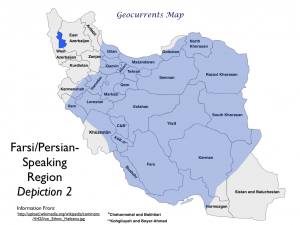 piction 2, found in the Wikipedia Commons, is oddly titled “iranethnics,” implying that it is concerned with ethnic identity rather than language per se. All of the categories mapped, however, are rooted in language, although the term “Fars” (the name of a province and, more generally, a region) is used rather than “Farsi.” In purely linguistic terms, “Fars” refers to a series of Persian dialects that are quite distinctive from standard Farsi. As one Wikipedia article puts it: “Northwestern Fars is one of the Central Iranian varieties of Iran. Its name is purely geographical: It is not particularly close to Farsi (Persian), but rather to Sivandi.” The Wikipedia’s family 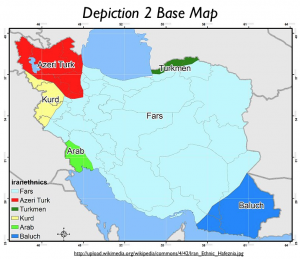 tree of Iranian languages treats Fars a distinct minor language, with some 100,000 speakers. On the source map for Depiction 2, however, all languages in the Iranian family are subsumed under the “Fars” category except Kurdish and Baluchi. Linguistically, this maneuver makes little sense, as the Iranian languages or northern Iran, such as Gilaki and Talysh, are more closely related to Kurdish than they are to Persian/Farsi. But it is also true that that Gilaki- and Talysh-speakers tend to be much less ethnically distinct from Persians than the Kurds. Finally, this map restricts the extent of several minority languages, particularly Arabic, more than many other language maps of Iran. 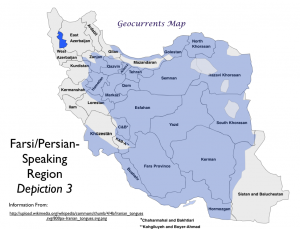 Depiction 3. The base map used for Depiction 3, also found in the Wikipedia, depicts the various languages of the Iranian family, both in Iran and neighboring countries. As non-Iranian languages such as Arabic and Azeri are not depicted, areas in which they are spoken are generally mapped as Persian speaking (“Persan,” on the French map) or at least as partly Persian speaking* (as in the case of the Azeri-speaking area). The Caspian languages (Gilaki, Mazandarani, etc.) are depicted, but only in the Alborz (Elburz) 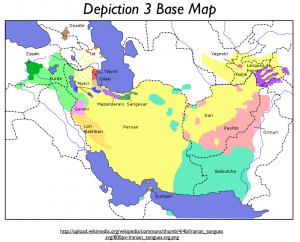 Mountains; the Caspian coast is instead shown as Persian speaking, a somewhat unusual depiction. The base map is also distinctive in elevating the Mukri dialect to the status of a separate language (even the Ethnologue, which tends to split languages, treats it as a mere dialect), and in depicting a sizable “Sangesar” area in the mountains of northern Iran. Yet according to the Wikipedia, the Sangsari language has only 36,000 speakers and is largely limited to the town of Sang-e Sar** (Mehdishahr), located south of the Alborz Mountains in Semnan Province. Related tongues in the Semnani branch of Iranian languages have similarly restricted distributions. 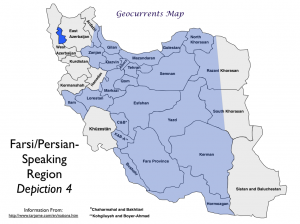 Depiction 4. The base map used for Depiction 4, found on the website of a Farsi translation service, is crude and politically compromised, as it incorrectly depicts the distribution of several languages as coincident with provincial boundaries. It incorrectly labels Azeri as “Turkish” and Balochi as “Pashto.” (In contrast to Turkish and Azeri, which are closely related, Balochi and Pashto are only distantly related, as they are members of distinct branches within the Iranian family.)  It also unconventionally classifies the dialects of Farsi spoken in Khorasan as Dari, a term gen 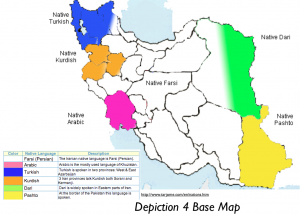 erally limited to Persian as found in neighboring Afghanistan. But the boundary between Farsi proper and Dari—both forms of Persian—is difficult to draw. As the Wikipedia explains: 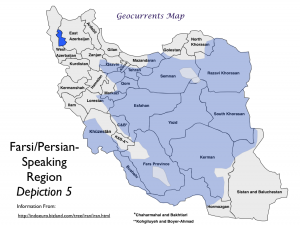 Depiction 5. The base map used for Depiction 5, found on a website devoted to Iranian languages, is similar to that of Depiction 3, although it shows a more limited distribution of Persian. 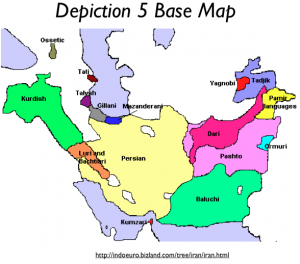 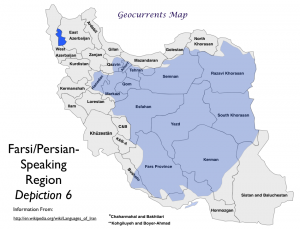 Depiction 6. The base map used for Depiction 6, found in the Wikipedia, is labeled “Languages of Iran.” This map shows a relatively limited distribution of Persian, barely depicting it as reaching the sea. It also shows much larger than usual Arabic- and “Lorish”-speaking areas. It subsumes Mazanderani and the Semnani languages into the “Tabari” category, although according to most analyses Mazanderani is closer to Gilaki (mapped here as a separate language) than it is to the Semnani tongues. (Significantly, the people 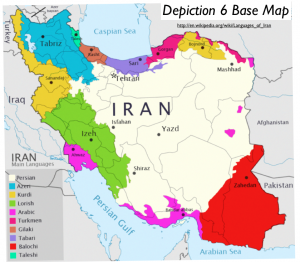 of Mazandaran call their own tongue “Gileki.”) Oddly, the Qashqai Turkic area in Fars Province is missing. 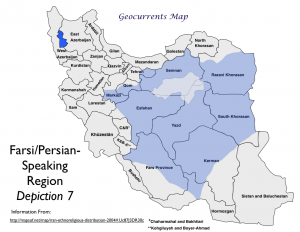 Depiction 7. The base map used for Depiction 7 is found on the “Maps of Net” website and is based on Ethnologue cartography. This map also restricts the distribution of Farsi; again it barely reaches the sea, but it does so in a different place than that indicated on Depiction 6. This map shows much larger than usual areas covered by Azeri (“Azerbaijani” 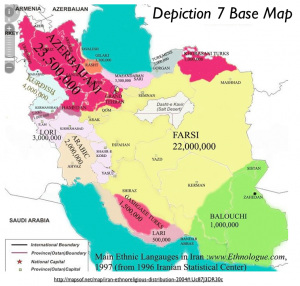 here), Arabic, and “Balouchi.” It also incorrectly portrays the northeastern Kurdish area as Turkic, labeling it “Khorasani Turks” and coloring it as if it were “Azerbaijani.” The extent of the Qashqai Turkic area in Fars province seems surprisingly large. Perhaps the oddest feature of this map is its exaggeration of the area covered by the southernmost Luri dialect, a very minor tongue by most accounts, and its elevation of this dialect to the status of a separate language (designated here as “Lari” to distinguish it from the “Lori” language of the north). This map also shows one uninhabited area, the Dasht-e Kavir (salt desert), in north-central Iran. 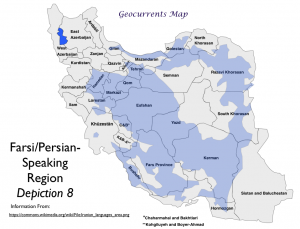 Depiction 8. The base map used for Depiction 8 is found in a Wikipedia article on Iranian languages. It shows large areas in central Iran as non-Persian speaking; presumably most of these areas are excluded by virtue of being largely uninhabited rather than by speaking a different language, but the mapping conventions make it impossible to be 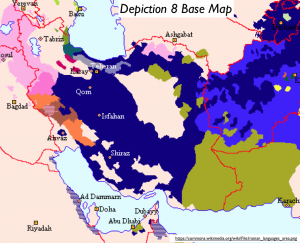 certain. This map also shows a much larger than usual distribution of the Balochi language, in several discontinuous patches, in northeastern Iran. As in Depiction 3, the Caspian lowland is depicted as Persian speaking. 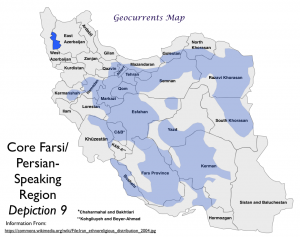 Depiction 9. The base map used for Depiction 9 is found on yet another Wikipedia page. It leaves large “sparsely populated” areas in eastern and central Iran blank, thus restricting the distribution of Farsi/Persian. It depicts Lur as a separate language, but divides it into two separate areas, mapping the central Luri zone as Persian speaking. It 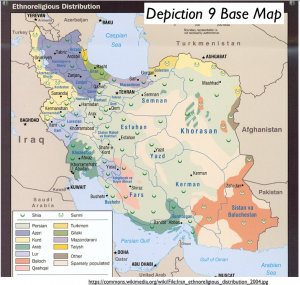 depicts a sizable area along the Afghan border as “other,” which would presumably refer to Pashto. 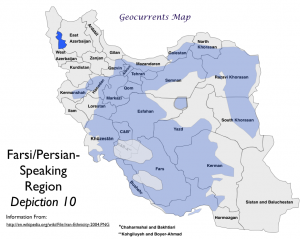 Depiction 10. The base map used for Depiction 10 comes from a Wikipedia map of ethnicity in Iran, although its categories are again are based on largely linguistic criteria. This map shows sizable uninhabited areas in east-central Iran, a not uncommon maneuver, but also does the same in southeastern Iran, an uncommon move (also found in the base map for Depiction 9). Again like Depiction 9, this map portrays the central Luri areas, but not the northern and southern ones, as Persian-speaking. It depicts a highly restricted 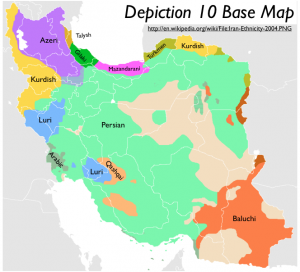 Arabic zone in both Khuzestan Province and farther south along the coast. 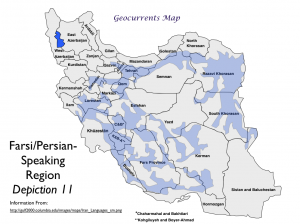 Depiction 11. The base map used for Depiction 11 comes from an older version of the language map of Iran posted on the Gulf 2000 site, which features the extraordinarily detailed cartography of Mike Izady. This map leaves large areas of sparse population unmarked, and hence restricts the distribution of Persian more than the other maps considered here. It makes several other unusual maneuvers. Luri is mapped as a dialect of Persian, yet the Raji dialect of central Iran is elevated to the status of a separate language. The Minabi dialect of the southeast, described by the Wikipedia as “a dialect which is something between Bandari and Balochi and Persian,” is also mapped as a separate language, and a small Cushitic-speaking zone (labeled “Somali, etc.”) is depicted in the same general area. The extent of Tati, closely related to Talysh, is much greater than in any other language map of Iran that I have investigated. 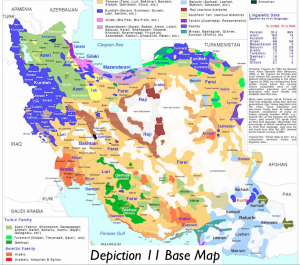 I am not qualified to assess which of these maps is the most accurate, and I hesitate to say whether such an assessment can even be made. I welcome feedback from readers on these and other issues pertaining to these maps.

*Note: for all depictions, areas shown as mixed between Farsi/Persian and some other language are left unmarked.

**This small city has an interesting recent history. According to the Wikipedia, “The primary religious belief in the area now is Shi‘ite Islam, but before the Islamic Revolution, there were many Bahá’ís in Sangsar, who had to migrate from the city after the revolution, due to a wide range of persecutions. As for other towns of Iran, the name has thus been changed by the Islamic authorities into Mahdishahr as if to signal its imposed pure Muslim identity. Mahdi is the Shia Muslim hidden Imam and Shahr means town in Persian, so Mahdishahr literally means town of Mahdi.”