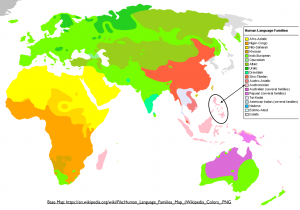 Language-family maps, like the one posted here, generally show Austronesian languages blanketing the entire Philippine archipelago. But such a depiction is not accurate, as the mother tongue of the majority of the inhabitants of the tip of the Zamboanga Peninsula on the island of Mindanao is definitely not Austronesian. Perhaps as many as 700,000 people here speak Chavacano (alternatively, Zamboangueño or Chabacano* de Zamboanga), a Spanish-based creole language that has been influenced by a number of Philippine languages. Zamboangueño speakers are, moreover, scattered in minority communities across much of the southwestern Philippines and even into northeastern Borneo (in the Malaysian state of Sabah). 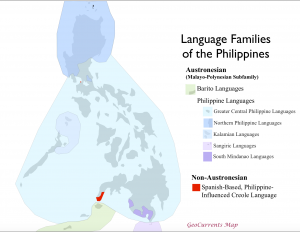 Other Chavacano dialects are found elsewhere in the Philippines, counting several hundred thousand speakers among them. The most important of these is Caviteño (or Chabacano de Cavite), found in the city of Cavite on Manila Bay, near the capital of the Philippines. Before World War II, Cavacano also dominated an important neighborhood in Manila itself, but this dialect, Ermiteño (named after the Ermita district), is apparently extinct. 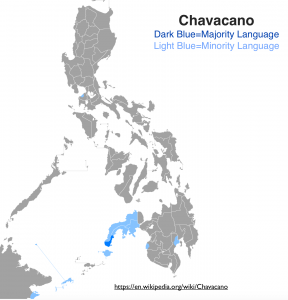 Chavacano is interesting from both linguistic and historical-geographical perspectives. To begin with, it is widely considered to be one of the world’s oldest creole tongues, with a history dating back some 400 years. It is clearly based on Spanish, which is quite a rarity; although many creole language are Portuguese-based and many have been influenced by Spanish, the only other Spanish-based creole tongue is Palenquero, spoken by only a few thousand persons in a small area of Colombia. (See John McWhorter’s The Missing Spanish Creoles for an extended exploration of this topic.) The presence of words borrowed from Nahuatl indicate that Chavacano derives more from Mexican Spanish than from pure Castilian. Different dialects of the language show distinctive borrowing patterns from various Philippine languages. Other languages have contributed vocabulary elements as well. In the Chavacano dialects of southeastern Mindanao (Davao), the influence of Chinese and Japanese is marked, giving rise to “two sub-dialects, namely Castellano Abakay Chino and Castellano Abakay Japón.”

As mentioned above, one Chavacano dialect is extinct, and others may be diminishing. (Not surprisingly, the number of speakers and the current status of the different dialects is hotly disputed.) But Chabacano de Zamboanga is a healthy language, forming both the main mother tongue and the lingua franca of Zamboanga, the sixth largest city in the Philippines, with more than 800,000 residents. Efforts are being made to ensure the health of the Cavacano media. A recent article in the Philippine Inquirer, for example, highlights a Chavavano radio drama produced locally by a Canadian Catholic priest. As Christopher Sundita, writing a comment on a 2011 Language Hat post, claims:

[T]he Zamboanga variety is the healthiest variety of Chavacano. It has experienced exponential growth since the 1940s with Keith Whinnom (1957) reporting 1,300 speakers to the 2000 Census reporting around 380,000 (with the usual caveats). There is ample media in Zamboanga Chavacano and its local prestige ensures its survival. The future doesn’t look too great for the Cavite & Ternate varieties. And Ermita Chavacano is already gone, if its sole speaker hasn’t passed away yet.

The linguist John M. Lipski goes further than Sundita, dismissing the low estimate of Whinnon. He argues strongly against:

[T]he mistaken notion among creolists (beginning with Whinnom 1956) that the largest Chabacano-speaking population, that of Zamboanga City, is small and moribund, when in fact it is a thriving first- and second-language speech community of perhaps half a million speakers. Frake (1971) was the first to provide more accurate information on Zamboangueño, but to this day many scholars in the Philippines and abroad are unaware of the true strength of the Zamboanga Chabacano community.

The geographical distribution of Chavacano sheds light on the distinctive historical geography of the Philippines. Although Spain ruled the Philippines for more than 300 years, Spaniards never settled in large numbers and did not seek to impose their language on people of the archipelago. The two most important places of Chavacano development were of particular military significance to Spain, and thus housed many soldiers and other Spanish-speaking personnel. One of these was Cavite, located on Manila Bay, which housed the all-important shipyard (the Astillero de Rivera) in which most of the storied Manila galleons, which sailed annually to Acapulco Mexico, were constructed. After the galleon trade was discontinued in 1815, the shipyard was transformed into the Spanish Arsenal.

Zamboanga, quite in contrast to Cavite, was situated at the far extremity of the Spanish imperial possessions in the Philippines. But that gave it great significance in the never-ending war between the Spanish Empire and the Muslim sultanates of southwestern Mindanao and the Sulu archipelago. Fort Pilar in Zamboanga long served as the bulwark of Spanish power in the region, albeit an insecure one that demanded constant reinforcement. Mexican soldiers, masons and other workers from Cavite, and laborers from the Visayas Islands in the central Philippines rubbed shoulders in the fort and adjoining town. In due time, the creole language of Chabacano de Zamboanga emerged, allowing these disparate groups to easily communicate with each other. 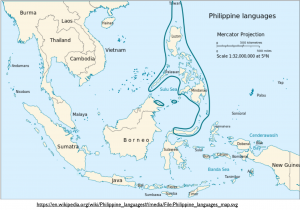 The map that I constructed to illustrate this post shows not merely the two main area of the Chavacano language in Zamboanga and Cavite, but also the main divisions of the indigenous languages of the Philippines. Several of these groupings are, however, controversial, particularly when it comes to the Batanic languages of the extreme north. But there is wide consensus that virtually all languages of the archipelago belong to the Philippine sub-family, a linguistic group that extends into a small slice of northeastern Borneo in Malaysia and a significantly larger swath of northern Sulawesi in Indonesia. The languages in this family are relatively closely related to each other, leading some scholars to suggest that they all derived from a language that spread long after the original Austronesian settlers reached the archipelago. As to Wikipedia puts it, “Although the Philippines is near the center of Austronesian expansion from Formosa, there is little linguistic diversity among the approximately 150 Philippine languages, suggesting that earlier diversity has been erased by the spread of the ancestor of the modern Philippine languages.” 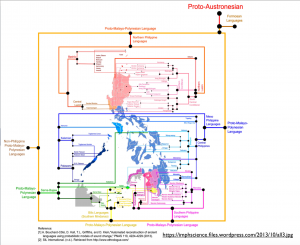 Finally, I have posted an interesting hybrid map-diagram of the languages of the Philippines made by, “a physicist who is in dire need of a stress reliever.” I would be interested in comments on this map from professional linguists.

* Controversies arise over the use of “Chabacano” versus “Chavacano.” As the author of one article notes, “In Zamboanga City, the old-timers will be offended if you tell them that their language is chabacano instead of chavacano. To the new generation the words chabacano and chavacano are interchangeable.” The Wikipedia explains the origin of the word in this manner:

Chavacano or Chabacano originated from the Spanish word chabacano which literally means “poor taste”, “vulgar”, “common”, “of low quality”, or “coarse”. During the Spanish colonial period, it was called by the Spanish-speaking population as the “lenguaje de la calle“, “lenguaje de parian” (language of the street), or “lenguaje de cocina” (kitchen Spanish to refer to the Chabacano spoken by Chinese-Filipinos of Manila, particularly in Ermita) to distinguish it from the Spanish language spoken by the peninsulares, insulares, mestizos, or the elite class called the ilustrados. This common name has evolved into a word of its own in different spellings with no negative connotation, but to simply mean as the name of the language with that distinct Spanish flavour. However, most of its earlier speakers were born of mixed parentage – Hispanized urban natives, Chinese migrants and Spanish or Latin American soldiers and civil servants during the Spanish colonial period.