Recent news from Kurdistan – often regarded as forming the world’s largest “nation without a state” – has been bleak. Protesting Iranian Kurds have been under attack from their own government, as have many other Iranians. Iran has also launched assaults on the autonomous Kurdish region in Iraq, which it accuses of harboring Iranian Kurdish insurgents in the rugged borderlands between the two countries. The Turkish government has been attacking its own Kurdish insurgents in the same mountains. These strikes are not precisely targeted and have killed a number of civilians. Turkey (Türkiye, officially) has also been launching attacks against Kurdish forces in the Kurdish-led autonomous region of Rojava in northeastern Syria, and has been indicating for some time that an outright invasion might be forthcoming.

The situation in Rojava is becoming precarious. Rojava, an autonomous region that is nominally part of Syria, is a unique experiment in political organization. It first emerged in 2012, just after the “Arab Spring” uprisings, and gained control over substantial territories a few years later as its militias drove out the forces of ISIS (ISIL/Daesh), with help from the U.S. military. Although largely Kurdish-led, Rojava is an explicitly multi-cultural and multi-linguistic polity, with Kurmanji Kurdish, Arabic, Syriac, Turkish, and Adyghe (or West Circassian) all serving in an official capacity in all or part of the region. Rojava is highly decentralized, divided into seven semi-autonomous regions, or cantons. Its governance is based of what might be called “bottom-up libertarian socialism.” As the Wikipedia article on the region notes in one breathless sentence:

The supporters of the region’s administration state that it is an officially secular polity with direct democratic ambitions based on an anarchist, feminist, and libertarian socialist ideology promoting decentralization, gender equity, equality, environmental sustainability, social ecology and pluralistic tolerance for religious cultural and political diversity, and that these values are mirrored in its constitution, society, and politics, stating it to be a model for a federalize Syria  as a whole, rather than outright independence.

This unparalleled political system is based on the ideas of Murray Bookchin, an American environmental writer and political theorist who died in 2006. Bookchin’s theories were adopted and reinterpreted in the early 2000s by Abdullah Öcalan, the imprisoned leader of the PKK (the Kurdistan Workers’ Party, a militant organization of Kurds in Turkey, officially classified as a terrorist organization by Turkey, the EU, and the United States.) During the Cold War, Öcalan and his followers adhered to Marxism-Leninism and sought to create an independent Kurdish state. After abandoning authoritarian leftism, Öcalan turned instead to the equally left-wing but decidedly libertarian vision of Bookchin, melding it with several reformulated traditional Kurdish socio-cultural practices. At the same time, the PKK abandoned its goal of outright independence, seeking instead mere Kurdish political autonomy. Many experts think that it has also rejected the tactics of terrorism, and hence no longer deserves the “terrorist” designation.

Whether Rojava’s idealistic system of governance can work in practice is an open question. I was certainly skeptical when I first learned of its existence. But the leaders of Rojava have been employing it for a decade, and evidently with some success. To be sure, they have been subjected to harsh criticism, with some writers claiming that they have authoritarian tendencies of their own and favor Kurds over members of other ethnic groups. The “Libertarian Communist” website libcom.org goes so far as to condemn Rojava as a fraudulent revolutionary organization that has allied itself with the Syrian Assad regime, Russia, and the United States – viscously attacking it, in effect, for doing what has been necessary for its own survival. Overall, what I find remarkable is how little actual reporting has been done on this intriguing political experiment. Considering Rojava’s de facto alliance with the United States, the possibility of an ISIS resurgence in the region, and the existential threat to region’s autonomy posed by the Turkish military, one might expect Western journalists to be keenly interested in what is happening there. But this is not the case. The world at large seems oddly unconcerned about Rojava and its travails.

Rojava’s leaders are worried that their regional autonomy and security might be sacrificed by the United States in the interest of maintaining its own alliance with Turkey, a fellow NATO member. As they point out, Rojava already lost a large strip of land after the Trump Administration acquiesced to the Turkish military occupation of part of northeastern Syria in 2019. A weakened Rojava was also forced into a power-sharing arrangement with the official Syrian regime over most of its northern lands (see the map below). This could hardly have been an easy compromise: in earlier years, Syria’s Assad regime had denied citizenship to many if not most of the country’s Kurdish residents, based on its ideology of Arab nationalism and supremacy. 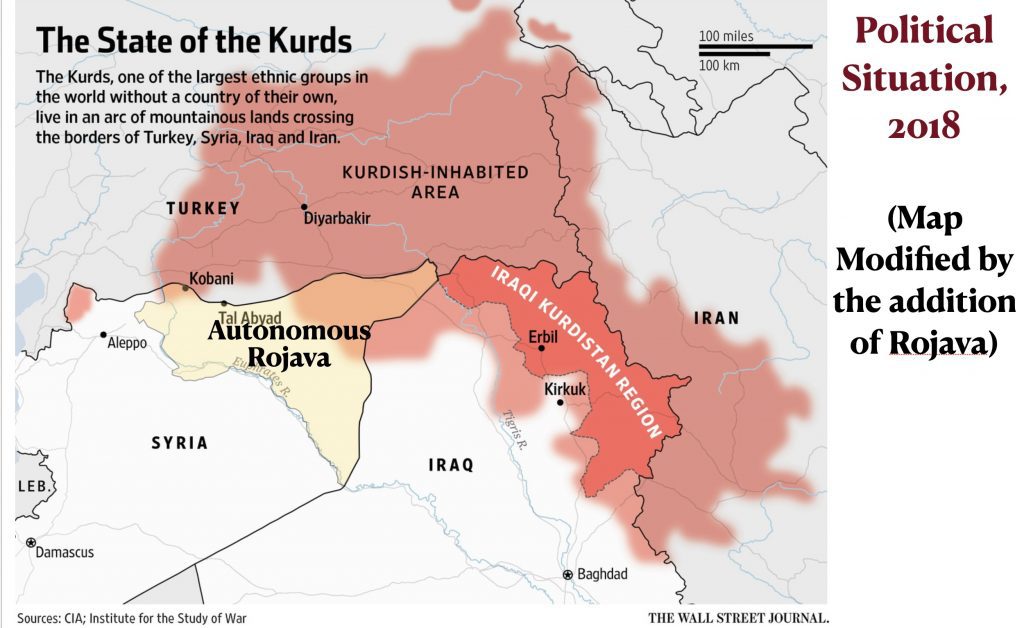 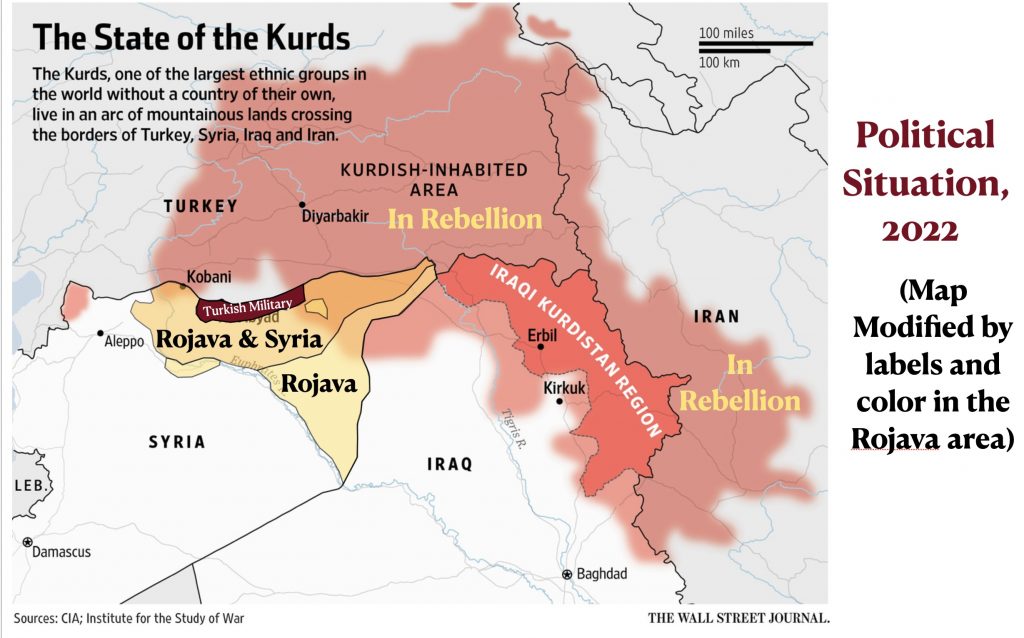 Although the United States has condemned recent Turkish incursions into Rojava, many residents of the region feel betrayed by the U.S. and the West more generally. As Nadine Maenza recently tweeted, “Turkey is targeting the very people that destroyed the ISIS caliphate, losing 11,000 lives so the United States did not have to put boots on the ground.” This sense of betrayal is a common motif in Kurdish historical thought – and for good reason. As early as 1919, U.S. diplomats offered some support for Kurdistan, including a proposal for an autonomous and eventually independent Kurdish state in what is now southeastern Turkey (see the map below), but they have never followed through. Since 1991, the Kurds of Iraq have generally upheld American political interests in the region, sacrificing many lives in the process. Although a few U.S. politicians, including New York Senator Chuck Schumer, have offered some support for Kurdish independence, the State Department remains deeply hostile to the idea, and the U.S. government more generally prioritizes its alliance with Turkey. 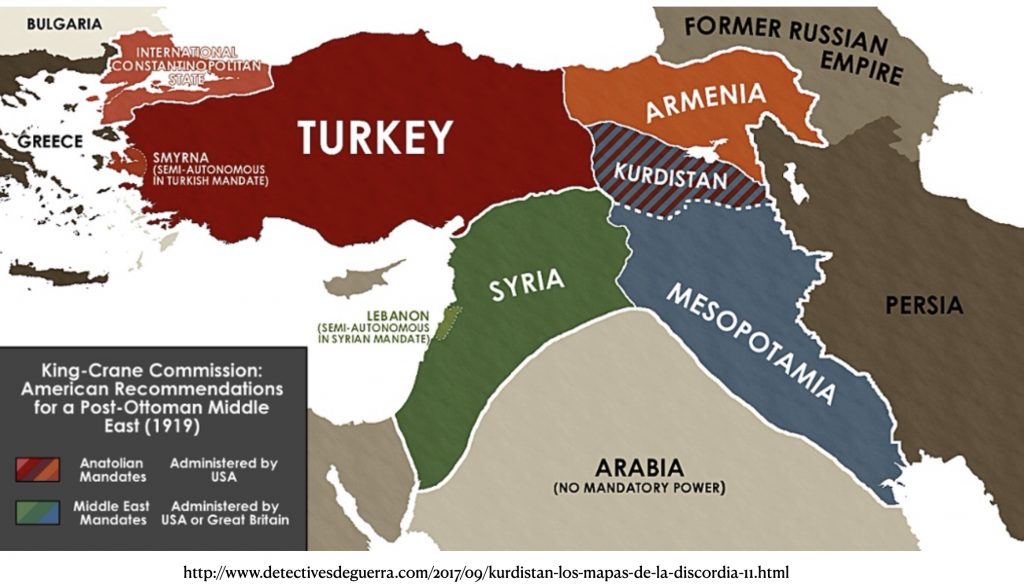 One of the biggest problems confronting Kurdish political aspirations has been their own lack of unity. Although the Kurds of northern Iraq have their own autonomous region that verges on independence, it remains geographically divided along the lines of political party, clan leadership, and dialect/language. In the mid 1990s, the Talabani-led, Sorani Kurdish-speaking Patriotic Union of Kurdistan fought a civil war against the Barzani-led, Kurmanji Kurdish-speaking Kurdish Democratic Party (see the maps below). Although this division was soon patched up, with U.S. help, the two sub-regions of Iraq’s autonomous Kurdish polity often find themselves at loggerheads. In 2017, the Kurdish peshmerga military had to retreat from Kirkuk, a city commonly deemed the “Kurdish Jerusalem,” and allow the Baghdad government to regain control. This humiliating withdrawal reportedly occurred after the Patriotic Union of Kurdistan covertly pulled out from the operation, reportedly in connivance with Iran. In the process, the Iranian position in Iraq was strengthened, harming U.S. interests. As the Institute for the Study of War reported at the time,

The Iraqi Government and Iran likely signaled their intent to use military force to compel the Peshmerga withdrawals in those provinces, if necessary. The Kurdish retreat is a win for both the central Iraqi government and Iran, whose proxies have seized new key terrain and consolidated control over previously contested cities. Iran has downplayed the role of its proxies in order to legitimize them as instruments of the Iraqi state. Western media coverage and statements from US officials have assisted Iran with this deception by denying the role of Iran’s proxies in Kirkuk. 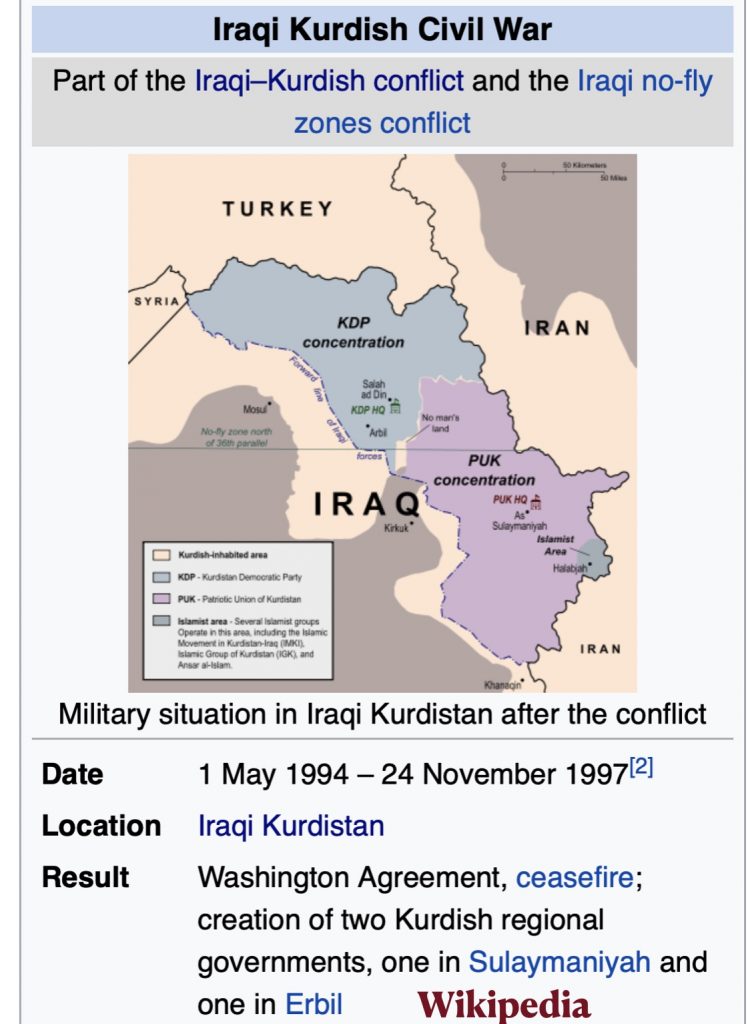 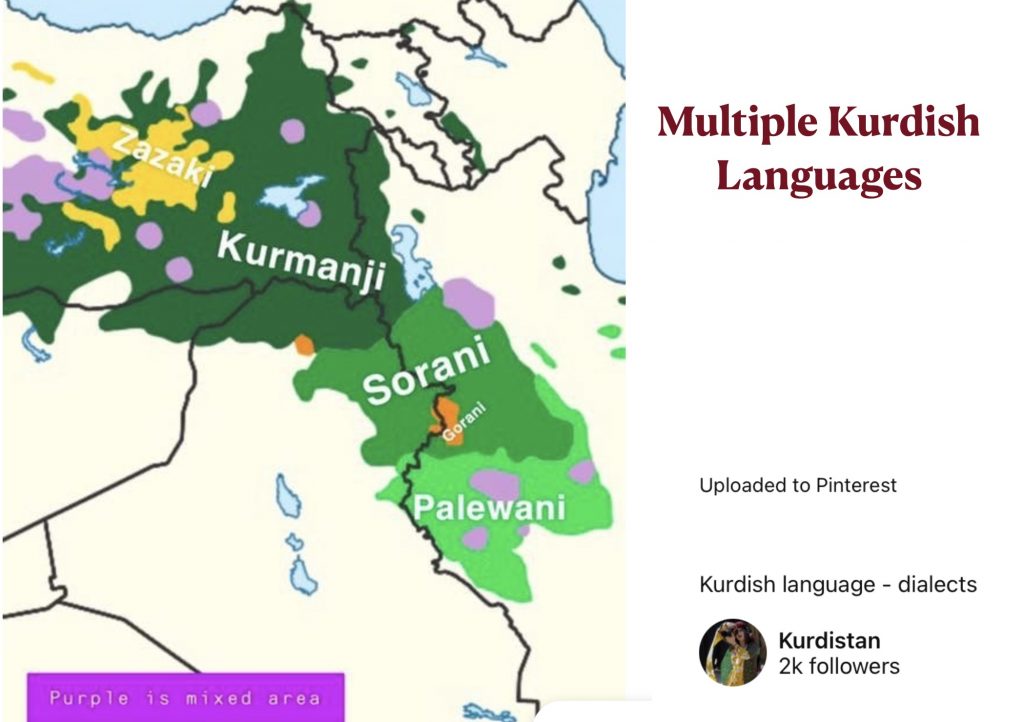 The deeper problems in Iraqi Kurdistan these days seem to stem more from political corruption and mismanagement than from internal conflict. A hard-hitting article from Kurdistan Source focuses on the recent surge of migrants out of Iraqi Kurdistan, blaming it largely on misgovernance. As the author writes

The new model [of governance] is premised on high taxation, aggressive privatisation, authoritarian governance, and eliminating nearly all social welfare. Since 2019, while household income and industrial output have stagnated, the government has increased taxes and service bills by 400% to over 1000%. This has led to nearly 70% of the region’s factories closing within just two years. While on paper, the new model is supposed to encourage private-sector driven growth, in reality, most entrepreneurs and private enterprises are driven out of business by the creation of hurdles. The majority of businesses I have talked to believe the government wants to drive them out of business to help certain companies monopolise each sector. These potential monopolies are often owned by members of the two ruling families* or people close to them.

The Kurdish tragedy will be explored in more detail in coming posts.

* Meaning the Barzani and Talabani clans.