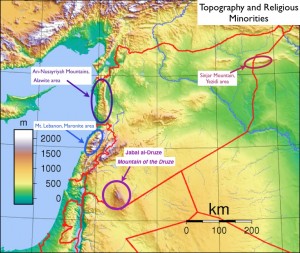 “The power of mountains to protect makes them asylums of refuge for displaced peoples.” Ellen Churchill Semple, 1911, Influences of Geographic Environment, Chapter 16.

“Great fertility in a narrow coastal belt barred from the interior serves to concentrate and energize the maritime activities of the nation. The 20-mile wide plain stretching along the foot of the Lebanon range from Antioch to Cape Carmel is even now the garden of Syria.” Ellen Churchill Semple, 1911, Influences of Geographic Environment, Chapter, Chapter 8.

In examining the spatial patterns of the eastern Mediterranean, many observers have been struck by the close correlation between mountainous areas and religious diversity. The heartland of the Druze sect is the aptly named Jabal al-Druze, a volcanic cluster of peaks that arises abruptly from the arid plains of southern Syria; other Druze communities are found in the mountains of central Lebanon and in the Golan Heights. The largest Christian population in the region, the Maronites, are concentrated in the Mount Lebanon area; the Alawite community is focused in the An-Nusayriyah Mountains of coastal Syria; and the main Yezidi population is found on and around Sinjar Mountain in the northeast.

The notion of a link between mountainous topography and minority populations was once a widely accepted principle of geography, put forth most eloquently by Ellen Churchill Semple. Since her day, geographers became so wary of environmental determinism that they ceased writing about such linkages. But whatever its causes, the correlation cannot be denied. Consider the language variety of the Caucasus—dubbed by medieval Arab geographers the “mountain of languages”—or of the central highlands of New Guinea. Such diversity does not always stem from “displacement,” as the quote above might indicate. But Semple was correct in noting the “refuge” often afforded by rough terrain. Up to this day, governments have a difficult time controlling, and imposing orthodoxy on, mountainous regions. By the same token, insurgencies often prove more intracatable in highlands than in lowlands. One cannot understand the geography of the Levant without grasping the connection between cultural diversity and upland topography.

Ellen Semple also stressed the cosmopolitan nature of coastal zones that engage in extensive commerce with foreign lands, highlighting Lebanon in the regard. Although Lebanon has its share of religious extremism and animosity, public opinion surveys indicate that Lebanon ranks alongside Turkey as the most socially and politically liberal Muslim-majority country. According to the indispensible Pew Research Center, of the Lebanese Muslims who see a struggle between Islamic modernizers and fundamentalists, eighty-four percent identify with the modernizers; in Egypt, by contrast, fifty-nine percent identify with the fundamentalists. Lebanese Muslims are also more supportive of democracy than are Muslims elsewhere in the world, even in Turkey. Another Pew survey showed that forty-nine percent of Lebanese Muslims consider it a good thing that Islam plays a small role in their country’s political life, whereas in Turkey only twenty-six percent of Muslims agreed, and in Egypt only two percent did so. And whereas eighty-four percent of Egyptian Muslims and eighty-six percent of Jordanian Muslims voiced support for the death penalty for those who leave Islam, in Lebanon only six percent of the Muslim population did so. Likewise, while only thirteen percent of Lebanese Muslims indicated support for whipping or amputation to punish theft and robbery, seventy-seven percent of Egyptian Muslims did so. (Support for the radical Shi’ite party Hezbollah, however, is much higher in Lebanon, where it is based, than in neighboring countries.) In short, the coastal, moutainous strip of territory along the eastern Mediterranean remains a highly distinctive land, set apart in several regards from the rest of the region in which it is located.

None of this is to argue that Lebanon’s coastal orientation determines the beliefs of its inhabitants, or that mountainous locations are necessarily culturally diverse. This is merely a question of tendencies, and tendencies can certainly be overriden by other factors. Semple herself entitled her magum opus Influences of Geographic Environment, not Determinents of Geographic Environment. When examining contemporary geopolitics, we would do well to keep such influences in mind.