Northeast Brazil has the highest percentage of people with African ancestry in the country. But due to the way that race is classified in Brazil (see the previous post), most of the region’s inhabitants are classified as Pardo, “brown,” or of mixed race. According to official statistics, the northeast’s Black population is relatively small and is significantly outnumbered by its white population (see the second map below). Of Brazil’s northeastern states, Bahia has the highest percentage of Blacks and the lowest percentage whites. Most enslaved Africans brought to Brazil arrived in Bahia, and as a result the state has long had a disproportionately African population. But even in Bahia, whites outnumber Blacks, at least according to official statistics. On the detailed map of racial distribution posted below, only one municipality in Bahia is depicted as having a Black plurality. 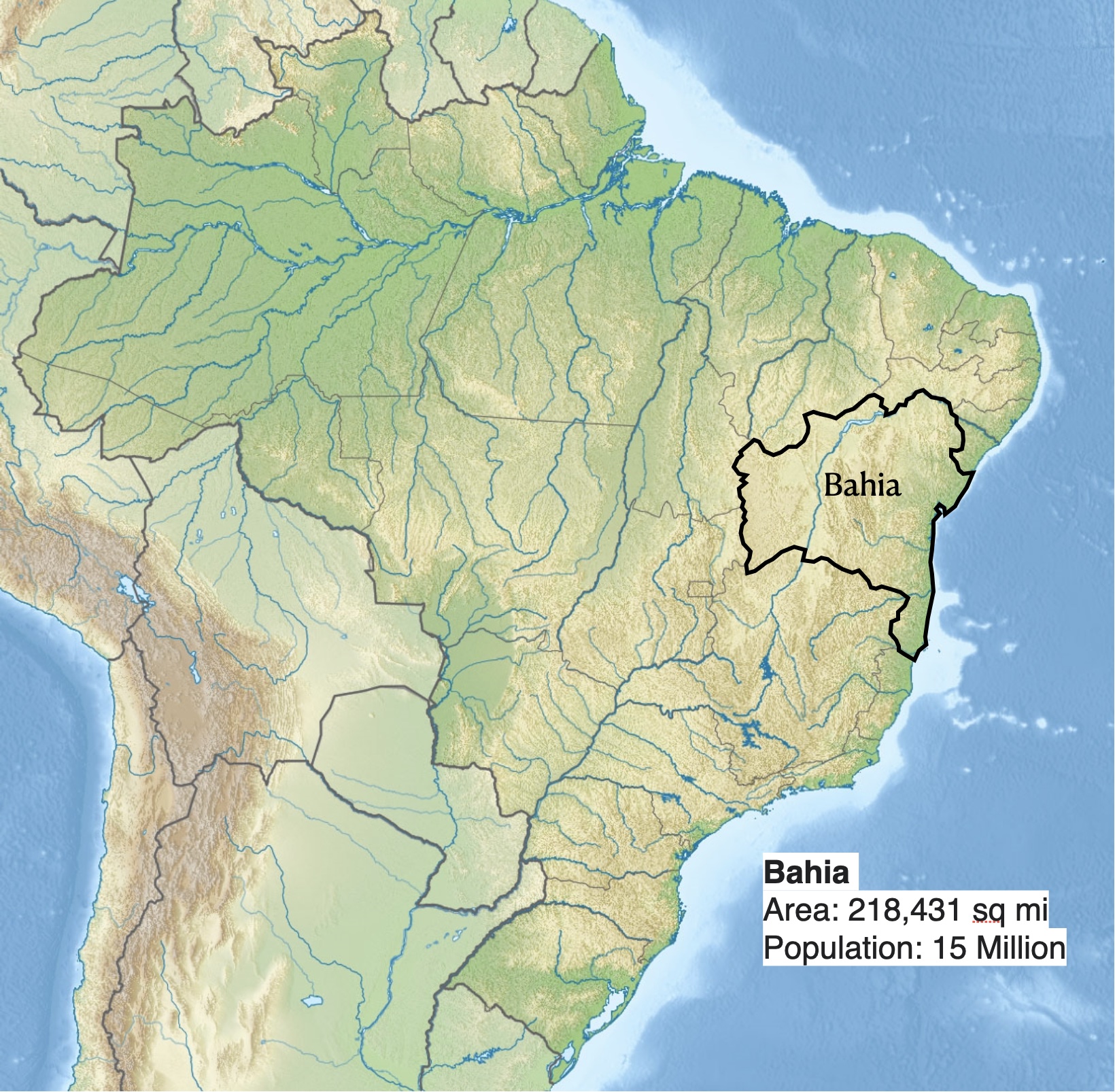 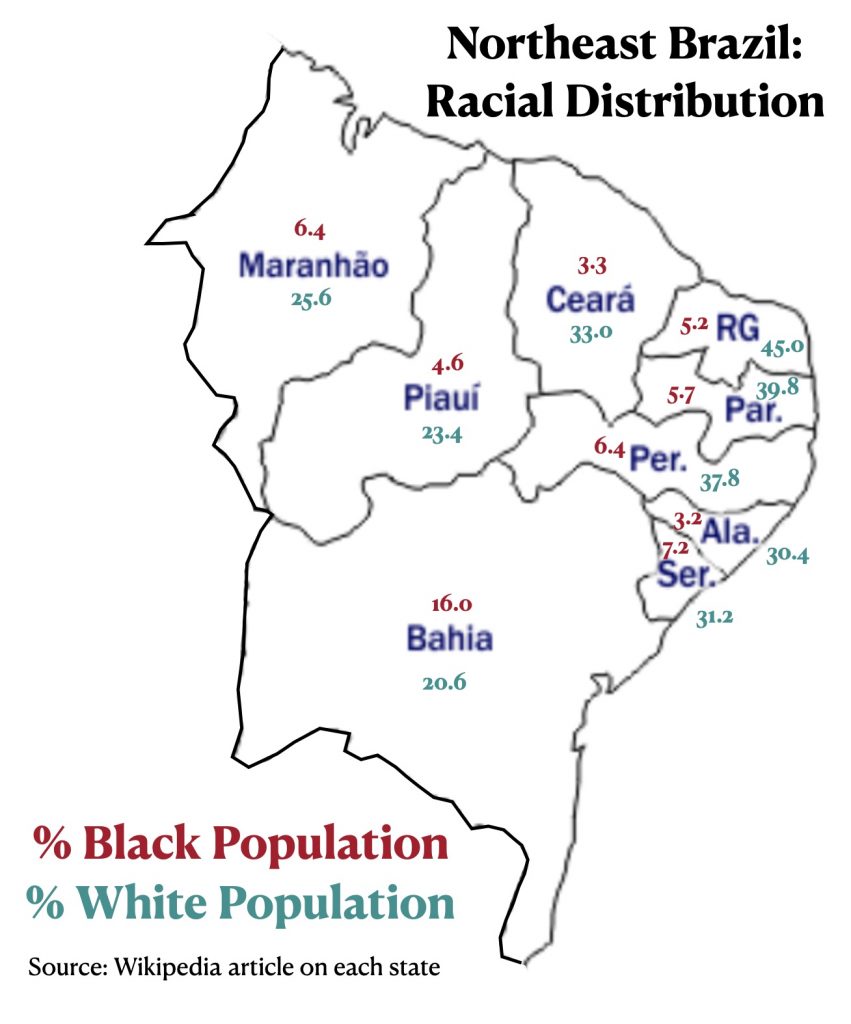 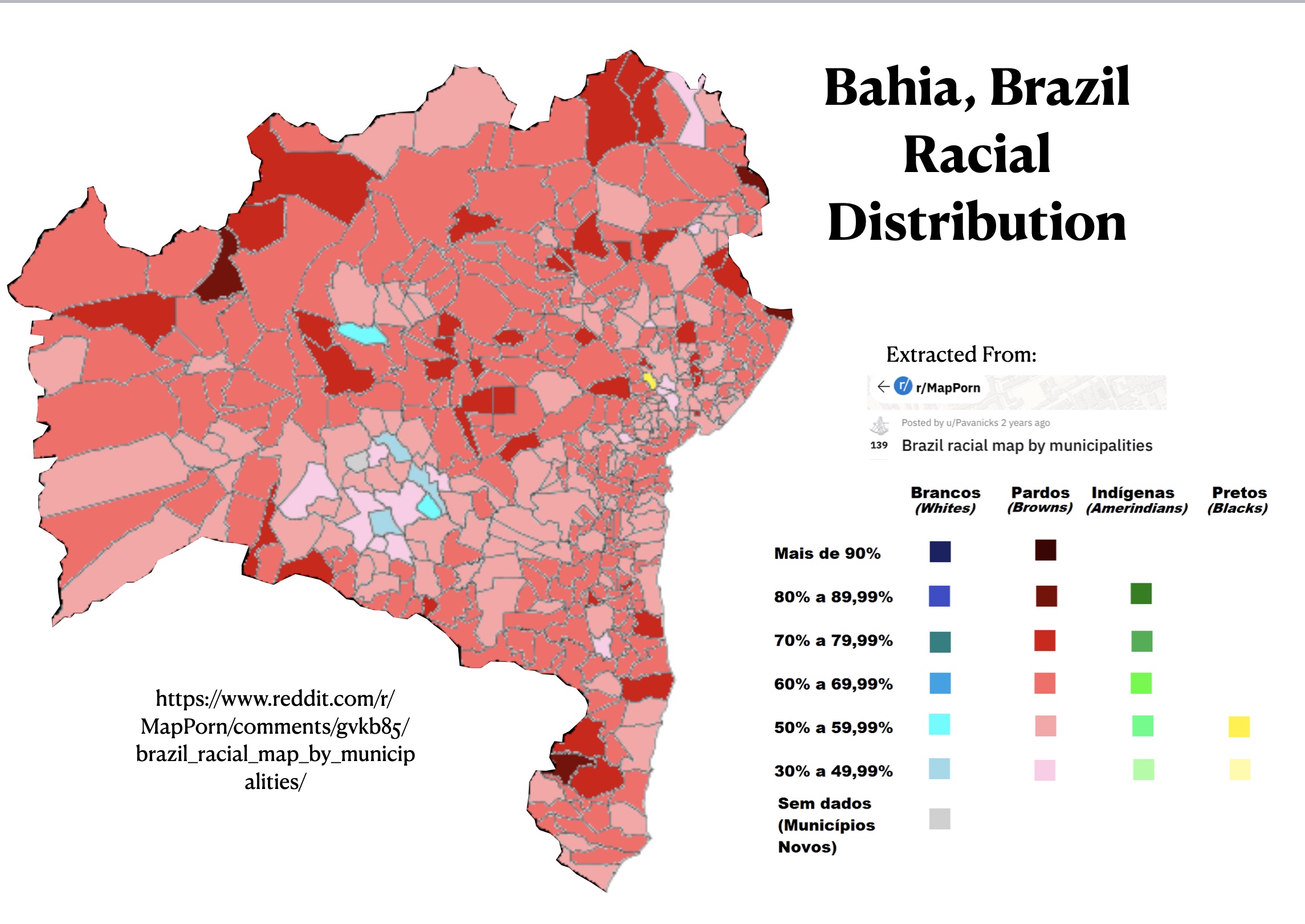 Bahia occupies a distinctive and in many ways paradoxical position in the Brazilian national consciousness. It has long been celebrated as Brazil’s site of origin, with its main city, Salvador, having served as the capital of colonial Brazil until 1763. Salvador is famed today for its colonial architecture and is an important tourist destination. But Bahia has also long been disparaged by Euro-Brazilians for its African cultural practices and its large Black population. On a map of Brazilian regional stereotypes (below), Bahia is marked as a land of “Black Witchcraft.” The Urban Dictionary defines the word “Baiano” first as “a person from the state of Bahia” and second as “a derogatory term for a poor, colored, or poorly educated Brazilian (used analogous to the English word n****r*).” According to my Brazilian friends, the second definition is most often used in São Paulo, where many poor Baianos work in construction and in other difficult and dirty jobs. 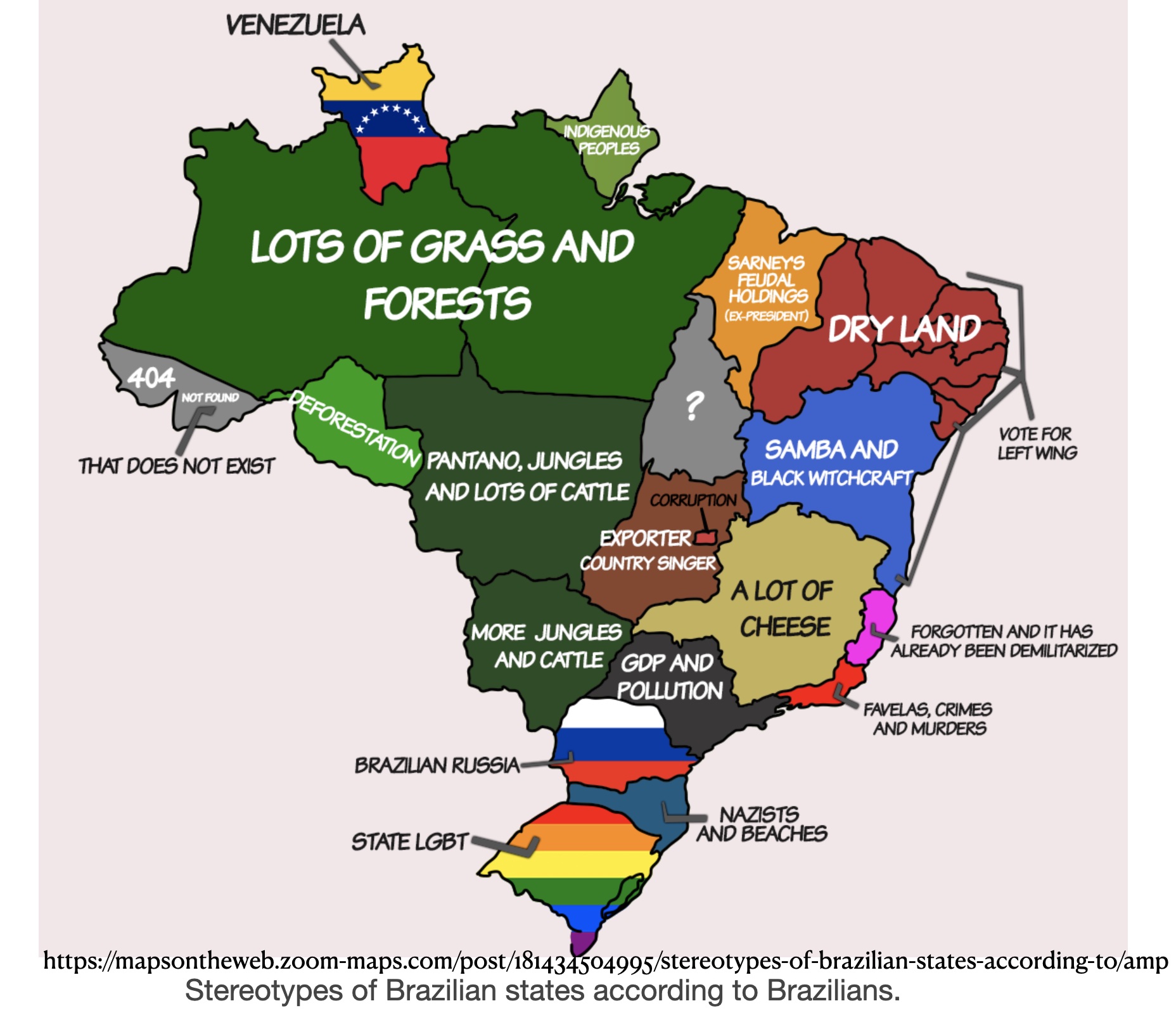 But the position of Bahia in Brazil’s national imagination is more complicated still. The state is also celebrated for many of its cultural practices that have spread to the rest of the country, centered on music, dance, religion, and cuisine. Such Afro-Brazilian cultural features as samba, candomblé, and capoeira are associated with Bahia but are now often viewed as essential aspects of Brazil itself. On the map of Brazilian regional stereotypes, Bahia is also noted as the land of samba. Many writers have remarked on Bahia’s paradoxical position. According to Anadelia Romo, Bahia is “alternately romanticized and denigrated, it has served both as a cradle of Brazilian national identity and as an embarrassing symbol of Brazilian backwardness.” Similarly, Livio Sansone writes:

[T]his is just part of the paradox: the counterpole of [Bahia’s] political weakness is the prestige and vivacity of Afro-Bahian culture. This is a culture that at times enjoys plenty of official recognition – mostly as regard to the religious dimension (the Afro-Catholic candomblé religious system) cuisine, and music – but which has a major role in the public image of Brazil and Brazilianess at home and abroad…”

Such contrasting images of Bahia have evidently obscured several important characteristics of the state. Annadelia Romo further argues that Bahia has often been misleadingly depicted as a “living museum.” As she writes, “to see Bahia as inherently, essentially rooted in Africa ignores a creative and important process of cultural grafting that has been at work over the course of the 20th century. To see Bahia as a cultural preserve is to see it as static whereas Bahian culture has been anything but.” Scott Ickes focuses instead on the socio-economic aspects the Bahian paradox. As he argues, “Newfound acceptance of these [Bahian Afro-Brazilian] customs was a democratic move forward, but it also perpetuated the political and economic marginalization of the black majority.”

The common stereotypes of Bahia, both positive and negative, pertain most closely to the state’s more densely populated eastern coastal region. Bahia’s deep interior is distinctive in many ways. Far western Bahia, for example, is part of the Brazilian boom zone of highly mechanized agriculture. The city of Barreiras, at the heart of this farming frontier, is rarely discussed either in or outside of Brazil. But as the Wikipedia article on the municipality notes:

In recent years [Barreiras] has experienced an economic boom and is one of the fastest-growing cities in the state of Bahia if not in Brazil. … From the decade of the 1970s to the present, the municipality has gone from 20,864 inhabitants to 120,000 and undergone important transformations. It has received public and private investments that have modified the social and economic profile. After 1990, the intense agricultural activity has caused changes in practically all the economic and social sectors. … Irrigation, the level terrain, and the dry climate with well-defined dry and rainy seasons have made Barreiras a leader in agriculture. … Going along with the development of agriculture, traditional cattle raising gave way in the 1990s to the use of high technology …

Needless to say, this depiction has little connection with the ways in which Bahia is commonly imagined in Brazil. But Bahia is a huge state, significantly larger than California. And as is the case in Bahia, most parts of California also fail to match the stereotypical vision of the state.

*Astoundingly, this slur word is spelled out in the Urban Dictionary.