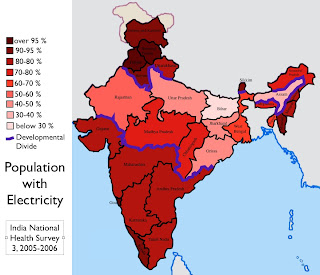 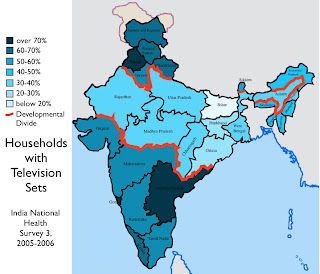 Electricity provision is a major issue in India. Almost half of rural houses are not served, and the basic infrastructure is woefully inadequate, with transmission losses of over 30 percent. According to the Wikipedia, electricity theft “amounts to 1.5 per cent of India’s GDP.” To be sure, India is responding, investing in conventional power as well as wind and solar generated electricity. In 2007, the Indian government optimistically announced plans to provide power to the entire population by 2012. But a July 3, 2010 article on electrification in Bihar concluded that progress to date has been “dismal,” noting that “out of the total target of 5,65,000 … household connections in 2010-11, the BSEB (Bihar State Electricity Board)has energized only 4,310 households till May this year.”

The map of electricity provision, compiled from survey data posted in Wikipedia, conforms relatively well to India’s basic development divide. Bihar, not surprisingly, lags behind all other Indian states, while Kerala and Goa in the south and Himachal Pradesh and Punjab in the far north come in with their usual high figures. The far northeast, especially Mizoram, fares better than usual, in part because its mountainous terrain facilitates hydroelectricity generation. In India’s poor north-central belt, Madhya Pradesh and Chhattisgarh perform above expectation, although several reports have claimed that Madhya Pradesh is failing to electrify its more remote villages. Still, it is notable that this poor state (with a 2006 per capita GDP of only $433) has made better progress on a number of other developmental fronts than its neighbors in the Hindi-speaking belt.*

The second map, showing households with television sets, corresponds still more closely to India’s developmental divide. All states in the center-north show low rates of ownership – with Bihar again coming in last – whereas all states in the south and far north exhibit relatively high rates. The “variable” far northeast, however, reports relatively low and uniform levels of television ownership.

The real standout on the map of television ownership is Andhra Pradesh, which places third in India despite being slightly below average in terms of per capita GDP. High rates of television ownership in Andhra Pradesh correlate with a particularly vibrant local entertainment industry. Hyderabad, the state’s capital, produces more feature-length films per year than any other Indian city, and follows only Mumbai (“Bollywood”) in movie revenues. Hyderabad’s films are in Telugu, Andhra Pradesh’s official language – giving rise to the nickname “Tollywood.” Tollywood movies are often dubbed into other languages, and many are distributed internationally. The local audience, however, is key. Telugu is India’s third most widely spoken language; with more than 75 million speakers, it ranks 15th in the world, ahead of Vietnamese, Korean, and Italian.

The Telugu film industry has long had a reputation for being more disciplined, wholesome, and conservative than Bollywood, which is infamous for its ties to the criminal underworld. Evidently, times are changing in Hyderabad. According to a recent story in the Deccan Chronicle, “Now, whether it is the blind aping of Bollywood or exposure to ‘international’ lifestyles, the new breed of Telugu stars are experimenting with social narcotics.” Cocaine, evidently, is the drug of choice among wayward Tollywood celebrities.

As we saw previously, Andhra Pradesh’s fertility rate of 1.8 is extraordinarily low considering the state’s modest economic standing. Some observers have suggested a linkage between reduced fertility and access to mass electronic entertainment. According to a 2009 CNN report, “India’s new health and welfare minister came out with an idea on how to tackle the population issue: Bring electricity to every Indian village so that people would watch television until late at night and therefore be too tired to make babies.” The American social scientists Robert Jensen and Emily Oster have argued that cable television reduces fertility in a different manner. Television shows, and soap operas in particular, they argue, enhance female status by showing rural women the more open and less sexist world of modern, urban, middle-class India.Unlike their counterparts in Bihar, most poor people in Andhra Pradesh are plugged into such modernity. To the extent that they emulate the modes of life that they see depicted on the screen, this may help account for Andhra Pradesh’s strikingly small families.

* Haryana is Hindi-speaking, but it developmental indicators are similar to those of neighboring Punjabi-speaking Punjab, to which it was once joined.