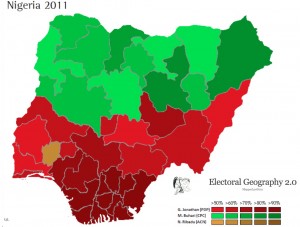 For the past week, GeoCurrents has demonstrated that the conflict in Ivory Coast cannot be reduced to a simple north/south, Muslim/Christian split. This kind of broad cleavage is more apparent in Nigeria, as shown by its recent election. But even in Nigeria, the contrast between a Muslim north and a Christian south is not as simple as it may appear. As in Ivory Coast, religious adherence in Nigeria is an uncertain matter. Most sources claim that the country has slightly more Muslims than Christians. Wikipedia puts the breakdown at 50.4 percent Muslim, 48.2 percent Christian, and 1.4 percent “other”; the CIA World Factbook states that 50 percent of Nigerians are Muslim, 40 percent Christian, and ten percent “indigenous.” 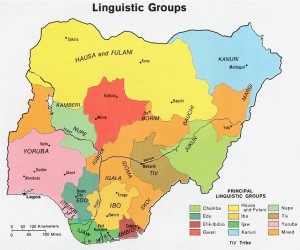 As these numbers suggest, Nigeria’s religiously indigenous population is proportionally smaller than that of Ivory Coast, although both sources quoted above probably understate it. Indigenous religion is especially prominent among the Yoruba of the southwest, one of the country’s main ethnic groups. Yoruba Religion may actually be expanding in Nigeria; its South American off-shoot, Candomblé, is certainly thriving in Brazil. Nonetheless, Islam is deeply entrenched in the north, and Christianity is dominant in the southeast. Southwestern Nigeria is mixed, with substantial Christian, Muslim, and Yoruba Religion communities, as is much of the central zone. Religious strife has long been most intense in the middle area and in the northern cities, where substantial Christian minorities reside. Despite the religious heterogeneity of Yorubaland, the region has seen relatively little conflict, in part because it is relatively homogeneous in terms of language and ethnicity. 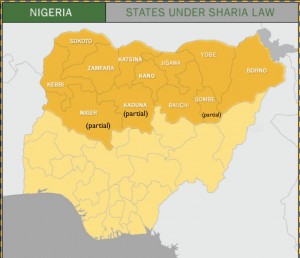 The northern focus of Islam in Nigeria is clearly visible on the map of Sharia in the country. Since 1999, Nigeria’s constituent states have been permitted to institute Islamic Law as the basis of local civil and criminal court procedures. All twelve northern states have done so—nine over their entire expanse, and three over large areas with Muslim majorities. Today, the geography of Sharia cleanly cleaves Nigeria’s north from its south.

So too does the electoral map. On April 16, 2011, Nigeria’s incumbent president—Christian southerner Goodluck Jonathan—trounced his main Muslim opponent, former military ruler Muhammadu Buhari, by fifty-nine to thirty-two percent. Every state in the Sharia belt gave a majority of its votes to Buhari; almost every other state massively rejected him. In partially Islamic southwestern Osun, the majority of votes went to another Muslim candidate, the anti-corruption stalwart Nuhu Ribadu. Ribadu polled well across Yorubaland and in parts of the country’s midsection, but he received only 5.4 percent of the votes nationally, and did even worse in the solidly Muslim north. (For returns by state, see Electoral Politics 2.0.)

Goodluck Jonathan crushed all other candidates across the southeast, receiving more than ninety-five percent of the vote in nine states, and more than ninety-eight percent in six. Jonathan also did surprising well over much the north, winning not just Christian votes. In the solidly Muslim state of Jigawa, he was favored by 36.7 percent of the voters.

But if many Muslim northerners were willing to vote for the Christian candidate, others were not willing to accept his victory. By all reports, the Nigerian election was relatively clean and calm, but the aftermath across much of the north was stormy. Post-election violence, directed mainly against Christians, may have taken 500 lives. In the north-central state of Kaduna, one estimate claims that 14,000 Christian fled their homes; in Katsina state, Buhari’s homeland, sixty-five churches have been burned or otherwise damaged, according to Christian sources.

The post-election carnage in northern Nigeria has been ascribed to several factors. Some sources emphasize high youth unemployment and the economic marginalization of the north. Christian sources point to radical Muslim leaders, arguing that the spasm of violence was not a case of “spontaneous combustion” but part of a planned campaign. Some Muslim activists stress anger over possible electoral fraud, dumbfounded that a supposedly Muslim-majority country would cast fifty-nine percent of its votes for a Christian candidate. Another source of anger was the supposed violation of the unwritten rules of Nigerian politics, which hold that Christians and Muslims must alternate in the presidency. This policy had been upended when the previous incumbent, Muslim leader Umaru Musa Yar’Adua, died in office before serving his full term. Yar’Adua was succeeded by vice-president Goodluck Jonathan, whose subsequent incumbency, some say, gave him an unfair advantage in the 2011 election.

Assuming that the election results were accurate, several issues call for further investigation. Why did Jonathan poll as well as he did in the north, winning a substantial minority of Muslim votes? Why did southern Muslims decisively reject the main Muslim candidate, Buhari, and why did northern Muslims equally rebuff the Muslim reformer, Ribadu? Tempting as it may be to delve into these issues, our next post will return to Ivory Coast before GeoCurrents moves on to another part of the world.