In the massive scholarly literature on nationalism, a distinction is made between “modernist” and “primordialism” interpretations of the phenomenon. Scholars adhering to the former camp, who constitute the majority, generally argue that nationalism did not emerge until the late 18th century (with the French Revolution) or the early 19th century (with the rise of nationalistic romanticism). Some writers in the latter group, in contrast, argue that nationalistic sentiments can be dated as far back as ancient times, when they were supposedly found among such peoples as the Egyptians and the Israelites. (I have always found this debate somewhat sterile: some aspects of nationalism are indeed of long standing, but nationalism as a coherent discourse emerged more recently.) Almost all scholars agree that modern nationalism emerged in the West. Most trace its origin to Europe, although Benedict Anderson, arguably the most influential scholar on the topic, located its genesis primarily in Latin America. Despite the celebration that his work received, Anderson remained frustrated that other scholars tended to bypass his thesis on Latin America.

One particular form of nationalism, which we might call “state-seeking ethnonationalism,” is almost always traced to Central and Eastern Europe. In this formation, a stateless group of people with a common language and culture seeks to create its own country, either by uniting small states into a much larger ethnic union or by seceding from one or more multilingual empires to establish a new ethnonational state. In Europe, the Germans and Italians are commonly viewed as having pioneered this approach to nation-state formation. After Germany and Italy emerged as states circa 1870, and handful of ethnic groups located further to the east struggled for decades to create their own ethnonational countries. This process began to reach fruition after WW I, with the dismantling of the Austro-Hungarian, Ottoman, and Russian empires, and was finally completed (in Europe at least) after the Cold War, which saw the break-up of the Soviet Union, Yugoslavia, and Czechoslovakia.

The national history of the Kurdish people, however, tells a different story, as ethnonational consciousness in some form seems to date back at least to the late 17th century. The Kurds at the time were divided between the multicultural Ottoman and Persian empires. Both empires were decentralized by modern standards, and several hereditary Kurdish statelets (emirates, or principalities) enjoyed considerable autonomy, especially in the eighteenth and early nineteenth centuries. But despite such local self-rule, the Kurds lacked anything like a state of their own, and some Kurdish intellectuals chafed under their subordination to the imperial rule of other peoples. As a result, an inchoate form of state-seeking Kurdish ethno-nationalism does seem to be traceable to the early modern period.

The key figure in early Kurdish nationalism was Ehmedê Xanî‎ (or Ahmad Khani), a poet, Sufi mystic, and intellectual, who lived from 1650 to 1707. His tragic love story, Mem and Zin (Mem û Zîn) is often regarded as the key work of classical Kurdish literature, and has even been deemed a “consecrated Kurdish national epic.” Based on a true story from the fifteenth century, Mem and Zin centers on two ill-fated lovers from rival clans, and thus bears superficial resemblance to Romeo and Juliet. The inability of the two protagonists to unite in life is usually interpreted as an allegory of the inability of the Kurds to unite and thus gain freedom from their imperial overlords.  One verse from Mem and Zin has been singled out as the quintessential statement of thwarted Kurdish national longings: If we had unity among ourselves, if we all, together, obeyed one another, the Turks, the Arabs, and the Persians would one and all be in our servitude.”

In an insightful analysis of the poem, Michiel Leezenberg argues that its nationalistic aspects were not enshrined and the Kurdish political imagination until the late 19th century, thus giving it a somewhat modernist gloss. Previously, Mem and Zin had been valued mostly for its expression of mystical love. But regardless of how the poem was interpreted in early periods, it does seem clear that Xanî himself was a devoted (proto?) nationalist. Considering the current division of Kurdistan among Turkey, Iraq, Iran, and Syria, as well as the lack of unity among the Kurdish people, Xanî‎’s vision seems more relevant today than ever.

In 1992, Mem and Zin was made into a motion picture in Turkey, although it had to be filmed in Turkish because the Kurdish language was at the time illegal in the country’s public’s sphere. In 2002, it finally came to the screen in the Kurdish (Kurmanji) language, filmed as a miniseries by Kurdistan TV (based in Erbil in Iraqi Kurdistan). According to director Nasir Hassan, it was “the most substantial and the most sophisticated artistic work ever done in Kurdistan, … using a crew of more than 1000 people and 250 actors.”

Despite Turkey’s concerns about Kurdish nationalism, it allowed and indeed supported the restoration of the mausoleum of the two historical lovers. According to one source, a staggering 1 trillion Turkish lira (650 million US dollars) was devoted to this Mem and Zin project. As reported by a local mayor who helped guide the restoration, “By restoring a historical piece that has become a ruin, we hope to contribute to tourism and pass it on to the next generations.”

The hope that the restored mausoleum would attract international as well as domestic tourists has apparently not been in vain. In August 2022, a Turkish newspaper reported with some excitement that a Chinese couple had recently paid their respects. The Chinese man, a Muslim convert named Nurettin Dong, has pledged to bring the story of Mem and Zin to China. As he put it, “I translated 2,500 couplets to Chinese. I am excited this will lead to greater recognition of this work.”

The mausoleum of Mem and Zin is located near the Turkish city of Cizre, just north of the Syrian border and not far from that of Iraq. A one-time center of Kurdish culture, as the capital of the autonomous emirate of Bohtan (see the second map below), Cizre has seen its share of tragedy. As summarized by the Wikipedia article on the city:

Under Ottoman control, Cizre stagnated and was left as a small district centre dominated by ruins by the end of the 19th century. The city’s decline continued, exacerbated by the state-orchestrated destruction of its Christian population in the Armenian and Assyrian genocides in 1915, and exodus of its Jewish population to Israel in 1951. It began to recover in the second half of the 20th century through urban redevelopment, and its population saw a massive increase as a place of refuge from 1984 onwards as many fled the Kurdish-Turkish conflict. At the close of the 20th century and beginning of the 21st century, Cizre has emerged as a battleground between Kurdish militants and the Turkish state, which inflicted significant devastation on the city to retain control. 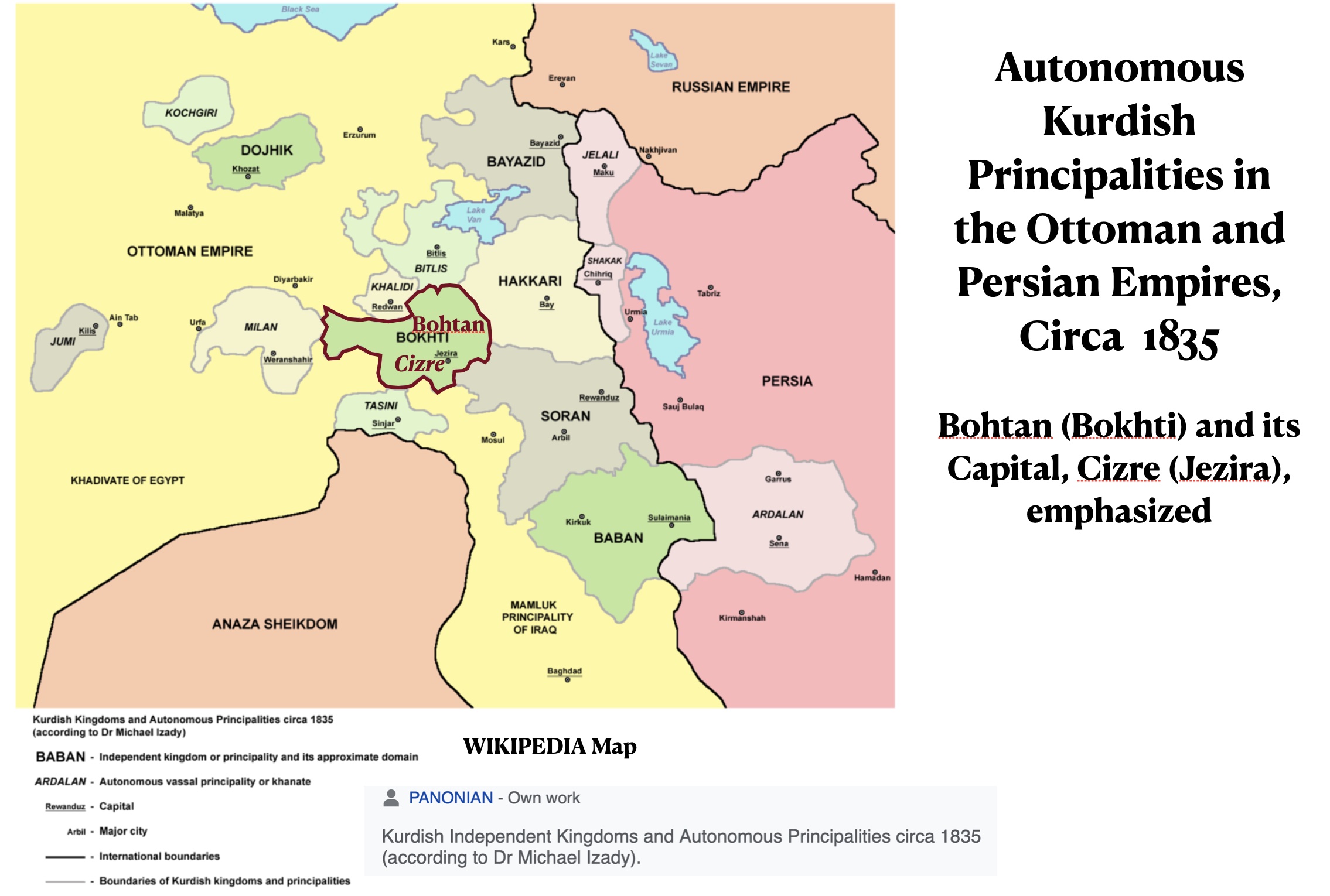 If Kurdish nationalism can be said to date back to the 17th century, the Kurdish nation itself –stateless though it still is – may have far deeper roots. We will look at this intriguing primordialist interpretation in the next GeoCurrents post