As noted in the previous post, Chile has a strikingly high level of income inequality despite its considerable success in social and economic development. Many observers blame Chile’s educational system for such inequity, contending that the country has many poor schools and does not spend enough money on education. As argued in a recent Council on Hemispheric Affairs article, “National and international advocates for education reform agree that Chile must significantly increase its expenditures on education to provide quality institutions and reduce inequality.” A post in an on-line publication called The Richest fleshes out this argument:

With a Gini coefficient of 0.501, Chile tops our list of countries with the most serious problem of inequality. Several factors contribute to this problem, including issues with higher education. While this has improved in recent years – many more Chileans are getting a college degree than before – most of those who land graduate jobs come from the richest schools in the country. Many of the poor go to cheaper colleges, hoping that they’ll still have the same opportunities as other graduates – only to leave college with mounting student loan debt and jobs that pay scarcely enough to cover those debts. There are several bills on the table to help improve the education system, but many of them aren’t moving very fast due to wealthy universities lobbying against them.

Chile has increased its educational expenditures in recent years. In 2008 (the most recent year of data availability), it devoted 4.0 percent of its GDP to education, up from 3.2 in 2006. 4.0 percent is not a particularly high number, but it is not too far below those of such educationally advanced countries as Germany (4.5%) and Australia (also 4.5%), and it exceeds that of Japan (3.5%). Those countries, however, are much richer than Chile and thus have much more to spend at the same GDP percentage level. But it is not merely how much money is spent that counts. Many critics on the left fault Chile’s decentralized and partly privatized educational system, claiming that it mainly benefits the well-off and does little to help the poor. Chile’s President Michelle Bachelet evidently agrees. As the abstract of a 2015 Pepperdine Review article by Vannia Zelaya puts it:

This paper looks into Chile’s educational system and the recent policy reforms that President Michelle Bachelet seeks to establish. More specifically, this paper explores the “Proyecto de Ley de Fin al Lucro, la Selección y el Copago,” which aims to eliminate private for-profit institutions within the public system, admission selectivity, and mandatory copay fees. With this, Bachelet’s administration and the Ministry of Education intend to end the inequality of access to education, which is part of Chile’s broader problem of great socioeconomic inequality. This particular policy is part of Bachelet’s comprehensive educational system reform, and it brings Chile’s voucher system into debate. The voucher system is explored to determine whether Chile is able to improve its situation by maintaining a privatized and decentralized system, or if it should move towards a fully public and centralized system as directed by Bachelet.

Regardless of such debates, official data indicate that Chile has done a relatively good job of providing basic education, coming close to achieving full literacy. In terms of net secondary school enrollment, however, Chile’s official figures are somewhat low, as can be seen in the map posted below. But 2013 World Bank data on the same indicator (which are measured somewhat differently from those used to make the map) place Chile at a substantially higher level, exceeding that of Australia (87% for Chile vs. 86% for Australia), although lagging behind most European countries. Chile’s levels of attendance in tertiary education, on the other hand, are quite high. Indeed, according to World Bank data on gross (rather than net) tertiary school enrollment, Chile has one of the top figures in the world, exceeding even that of Norway and well ahead of those of Germany, France, and the United Kingdom. But as the quotations given earlier in this post indicate, not all Chilean colleges and universities provide high quality education. 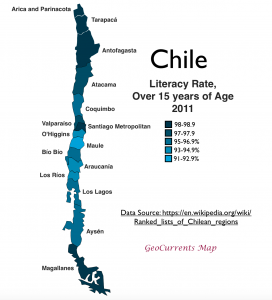 Levels of education, of course, vary from one Chilean region to another. To see how they these patterns are geographically structured, I have mapped several educational indicators, again using data provided in the Wikipedia article on Ranked Lists of Chilean Regions. As can be seen, the disparities between regions 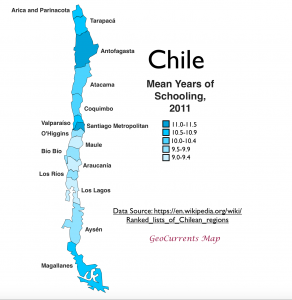 are not particularly pronounced. Metropolitan Santiago scores high, as do the wealthier mining regions of the north and the highly developed region of Magallanes in the far south. The generally well-off region of Aysén* just to the north of Magallanes, however, does not rank as high as might be expected. Other oddities are the elevated figures for secondary and tertiary enrollment in certain mid-level and relatively poor regions, such as Arica 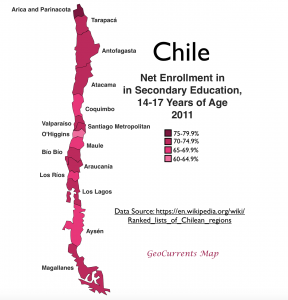 and Parinacota and Araucanía. 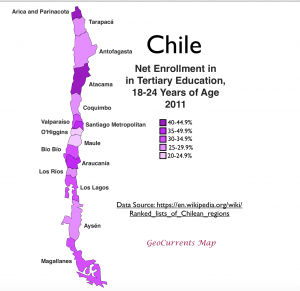 *Aysén is an interesting region, and I hope to devote an entire post to it in the near future.