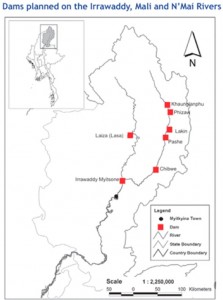 Recent news reports have trumpeted Burma’s (Myanmar’s) decision to suspend construction of the massive, Chinese-financed Myitsone Dam on the Irrawaddy River in the northern reaches of the country. The Economist magazine, for example, claims that the cancellation provides “mounting evidence that the new government in Yangon is serious about reform.” That assessment may well be on-target, although confidence is not inspired by the “government in Yangon” tag; since 2005-2006, Burma’s seat of government has been located not in Yangon (Rangoon), but rather in the new city of Naypyidaw, located 320 kilometers to the north.

Most articles on the suspension of the Myitsone Dam concentrate on Burma’s close but now potentially fraying relationship with China, as well as on the country’s “nascent stirrings of democracy” (as the New York Times frames the issue). The important ethnic dimension of the controversy, focused on the grievances of the Kachin people, has generally been downplayed if not ignored altogether. The Economist article referenced above merely notes that “There had been strong opposition to the dam from environmentalists and local Kachin people…”, while the New York Times piece cited above fails to mention the ethnic issue. 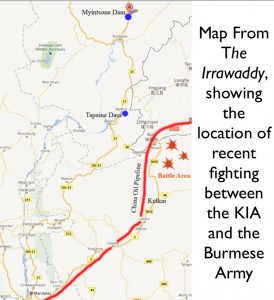 A markedly different and far more comprehensive view of the conflict is found in the webpages of The Irrawaddy, an anti-government newspaper published by Burmese exiles living in Thailand. As multiple Irrawaddy articles demonstrate, the Burmese military is currently engaged in a small-scale but brutal war against the Kachin Independence Army (KIA), a well-armed ethnic militia with some 10,000 fighters. Although the Burmese military has apparently routed Kachin forces in recent weeks, the war presents a headache for the Burmese government that could potentially destabilize the country. From Burmese independence in 1948 through the 1980s, multiple ethnic insurgencies controlled much of Burma’s hinterlands and occasionally threatened the government’s hold on power. In the 1990s, ceasefire agreements were signed with most rebel armies, including the KIA, which gave a measure of stability to the troubled country. Renewed ethnic insurgency, however, jeopardizes Burma’s tenuous economic standing as well as its tentative movement toward political openness and reengagement with the United States and the European Union. Removing one of the main sources of Kachin discontent, the Myitsone Dam, thus has important security ramifications for the Burmese state.

According to a September 28, 2011 article in The Irrawaddy, recent fighting near the dam site has been intensive: “Civilians have fled in terror as the Kachin Independence Army (KIA) loses its major stronghold.” Irrawaddy reporters maintain that thousands of soldiers on both sides have been engaged in combat, and that “at least 15 battalions of the Burmese government army are relentlessly shelling rebel-controlled areas with 120mm, 105mm and 80mm artillery fire.” Kachin refugees have reportedly tried to flee across the border into China, only to be rebuffed by Chinese authorities. 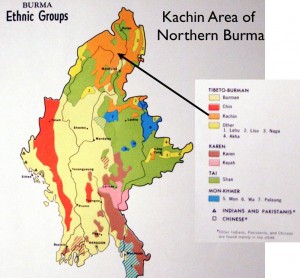 Another article in The Irrawaddy details alleged human rights violations that have accompanied the military struggle. A recently released 20-page report issued by the Kachin Women’s Association of Thailand (“Burma’s Covered Up War: Atrocities Against the Kachin People”) accuses “Burma’s regime of displacing over 25,000 villagers and deliberately targeting civilians in killings, torture and sexual violence during the past four months of fighting.” The Irrawaddy admits, however, that it has been unable to independently verify the report’s numerous allegations. The article goes on to note that an organization called the Thailand Burma Border Consortium claims that “the Burmese regime has destroyed more than 3,000 villages and displaced over half-a-million civilians in eastern Burma” since 1997. Many of these would have been Kachin.

The term “Kachin” actually refers to a complex array of related ethno-linguistic groups in northern Burma and adjacent areas on China and India. The largest single ethnic group within the category, the Jingpo, numbers well over one million. A traditionally animist people, the Jingpo have more recently embraced Christianity to a substantial degree. Both Christianity and animism distance the Jingpo and other Kachin groups from the country’s dominant and strongly Buddhist-identified Burmese-speaking population, as well as from the Burmese state. The Kachin are usually indentified as a “tribal” people, implying the lack of complex social hierarchies and indigenous state-level political organization. Yet as Edmond Leach’s pioneering 1954 study Political Systems of Highland Burma showed, traditional Kachin socio-political structure contained tremendous variation, with some communities functioning essentially as small-scale states. 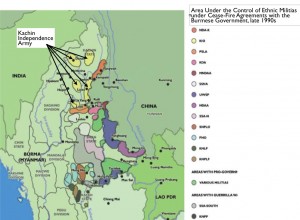 Tension between the Kachin people and the Burmese state goes back to independence in 1948. As the British colonial regime was preparing to depart, ethnic leaders pushed for the creation of a federal system that would have granted autonomy to the Kachin and other minority groups. Such desires were frustrated, and in 1961 warfare broke out between the newly formed Kachin Independence Army (KIA) and the Burmese military. Sporadic fighting continued for decades. A 1994 ceasefire accord allowed the KIA to retain its arms, provided that it no longer challenged the government of Burma. That agreement broke down in 2010 after Burmese officials attempted to place the KIA under national military command. Kachin leaders refused the offer, and again pressed for the creation of a decentralized, federal state. In April 2010, three bombs exploded near the dam site, killing several people and wounding many more. Overt fighting between the KIA and the Burmese army broke out again in June 2011, but peace talks were soon initiated. Negotiations remained stymied by a variety of unsettled disputes, with the Myitsone Dam—which would displace 10,000-20,000 Kachin villagers—figuring prominently. The suspension of the project could thus lead to a new round of negotiations, and perhaps even the eventual generation of a solid peace in northern Burma. Many observers, however, have little faith in the new, supposedly reformed Burmese government, and thus expect the conflict to simmer for years to come.