Few issues are more controversial in Malaysia than the country’s National Development Policy, particularly its extensive “affirmative action” provisions that provide economic and social advantages for the majority (61%) indigenous population (“Bumiputeras”) at the expense of the Chinese and Indian communities. Dating back to the early 1970s, this policy has resulted in significant economic gains for the Malay community, but at some economic price for the country as a whole—and at more significant costs for Malaysians of Chinese and Indian background. Although Muslim Malays—and all Malays are automatically registered as Muslims in Malaysia—have been the main beneficiaries, other Bumiputeras (“sons of the soil”), such as the non-Malay-speaking, non-Muslim indigenous peoples of Sarawak and Sabah in northern Borneo, receive the same benefits. Who exactly qualifies as a Bumiputera, however, can be a complicated and controversial matter, as the governing laws vary from state to state. In 2009, for example, a local debate erupted in Sarawak in northern Borneo when a local girl was unable to attend college after being denied Bumiputera status because her mother is Chinese, even though her father is an Iban indigene. In neighboring Sabah state, such a mixed-race individual would in theory be granted Bumiputera status. 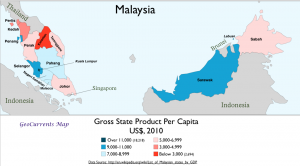 At the national level, controversies surrounding the policy intensified this week after Malaysian Prime Minister Najib Razak announced new measures focused on providing business training and affordable housing for the country’s Bumiputera majority, even though he had previously vowed to substantially reform the affirmative action policy. As reported in a recent Malaysian news article, “analysts said the announcement, made live on national television, aimed to rally Najib’s United Malays National Organisation (UMNO) ahead of party elections but could hurt an already slowing economy.” Although the Malaysian economy has in general performed well over the past several years, it is currently confronting a marked slowdown apparently caused by “current-account deterioration, fiscal balance deterioration, [and] higher leverage.” During periods of economic distress, Malaysia’s affirmative action program tends to provoke heightened controversy, as is currently the case.

Economic production in Malaysia, as in most developing countries, is quite geographically uneven, as can be seen in the first map. Per capita GDP ranges from US$ 2,694 in Kelantan to US$ 18,218 in Kuala Lumpur. The remainder of today’s post considers whether such discrepancies match Malaysia’s geography of ethnicity. 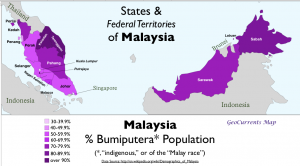 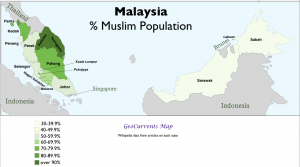 As the second map reveals, high levels of economic development (as measured by the admittedly crude yardstick of per capita GDP) are found in and around the Kuala Lumpur area in western peninsular Malaysia, although resource-rich Sarawak in northern Borneo falls into the same general category. The country’s least developed states, in contrast, are found in the northern reaches of peninsular Malaysia. As the third map shows, northern Peninsula Malaysia also has a high percentage of Bumiputeras. Pahang in the central part of the peninsula and Sabah and Sarawak in northern Borneo, however, also have large Bumiputera majorities, yet Sarawak in particular has a high level of per capita economic development. Yet as the next map show, the Bumiputera population of Sabah and Sarawak is quite distinctive from that of the peninsula, as it is heavily composed of non-Muslim indigenous peoples. Malaysia’s Chinese community—against whom the country’s affirmative action programs are largely directed—is particularly well represented in Kuala Lumpur, the country’s economic core. Large Chinese minorities are also found in Johor and Perak, states of middling economic performance. Perak also has a large Indian population, as can be seen in the final map. 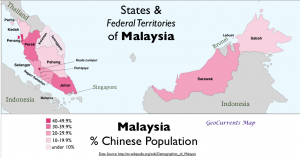 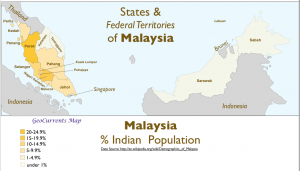 Perhaps the most interesting thing revealed by these maps is the ethnic contrast between Malaysia’s two capitals: Kuala Lumpur and Putrajaya. Kuala Lumpur, the seat of parliament and by far the largest and wealthiest city in the country, is ethnically diverse, with a Bumipitera minority and an especially large Chinese community. The new city of Putrajaya (population 68,000), Malaysia’s administrative capital since 1999, is in contrast almost entirely Malay and hence almost entirely Muslim (97.4 percent of its population follows Islam according to the 2010 census). Intriguingly, Putrajaya’s lack of ethnic diversity is seldom noted in the literature on the city. Most sources stress instead its planned development, parks, and spacious living accommodations.