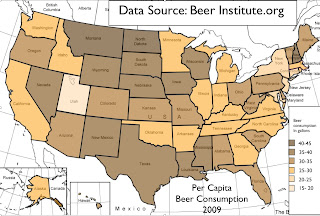 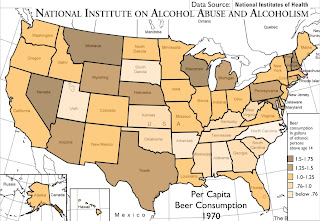 Our third and final post on the geography of U.S. alcohol consumption begins with beer. The first map, from data provided by the Beer Institute, depicts per capita consumption in 2009. Montana, North Dakota, and New Hampshire come out on top, although in the case of New Hampshire the figure again reflects sales to residents of neighboring states. Overall, regional disparities in beer drinking are not pronounced. Although Beerinfo.com claims that “As a rule of thumb, the colder the state, the more beer consumption,” no such rule is borne out: compare, for example, Alaska and Hawaii or New York and Mississippi. A vague zone of low consumption is apparent in the Mid-Atlantic region, a region of high consumption is visible in the north center-west, and Utah, as always, is strikingly dry, but that is about all one can say.

The situation in 1970, depicted on the second map, was conspicuously different. At that time, the Southeast was a land of little beer, the Middle Atlantic consumed beer moderately, and the north center-west included both heavy- and light-drinking states. These regions no longer exist; U.S. beer consumption has undergone regional convergence, albeit not to the same extent as wine drinking.

Although climate does not in fact play much of a role in alcohol consumption, religion does. Utah’s consistently low ranking reflects the fact that the majority of its people belong to the tee-totaling Mormon Church (Church of Jesus Christ of Latter Day Saints). Yet in the 1970s, Utah’s figures were not appreciably lower than those of the Deep South (excluding Florida and Louisiana). At the time, the residents of Alabama drank less than those of Utah, at least in terms of legal alcohol sales. The Southeast’s formerly dry ways also reflect the geography of religion, as the dominant Protestant sects of the region are historically prohibitionist. Through much of the Southeast, alcohol bans at the local level persist. More than half of the counties in Arkansas are completely “dry,” and alcohol sales are prohibited statewide on Sundays. Evangelical Protestantism also plays a role in the lower drinking rates of the Great Plains states. In the Dakotas, alcohol avoidance was linked to heavy settlement by Norwegian Lutherans, who were far more abstemious than their German counterparts.

If religious beliefs once restrained alcohol use in the Southeast and Great Plains, their effects today are muted. Although this is still the most devout part of the country, religious adherence in the region no longer correlates closely with alcohol avoidance. Alabama and Georgia, as well the Dakotas, have transitioned from very low to moderate levels of consumption. People in the upper South and southern Great Plains still drink less than other Americans, but they imbibe far more than their parents did. The greatest single transformation has been that of beer drinking in South Dakota, which has gone from a light to heavy consumption state.

The transformed drinking patterns of the formerly dry parts of the country might be linked to changing priorities among Protestant leaders. In previous generations, ministers often focused on reforming the sinful ways of their congregation – which often meant drinking, especially for men. Preaching today tends to be more positive and inspirational; as Pastor Jeffrey MacDonald recently complained in a New York Times opinion piece, “churchgoers increasingly want pastors to soothe and entertain them.” As a result, the moral compass of Protestant fundamentalism increasingly turns from the behavior of the congregation to that of society at large, emphasizing issues like abortion or gay marriage. One can only speculate about the role that this shift has played in allowing drinking behavior in the Bible Belt to converge toward the national norm. Such conditions do not obtain in Utah, largely because the Latter Day Saints have a much stronger doctrinal prohibition against alcohol use than Southern Baptists, Evangelical Lutherans, or even Pentecostals.

The decline of drinking in the Northeastern, Great Lakes, and Pacific states is more secular in nature. I suspect that it is linked to increasing intolerance for drunk driving and other forms of impaired behavior. Increased competition also plays a role. It is hard to imagine trying to succeed in a New York advertising agency today while quaffing as much as the characters in the television show Mad Men.